From the Newsroom North Coast

In his statement, Mr Hogan claimed the actions of the Qld Premier focus on winning the election while Australian lives are “in chaos” due to the ongoing Covid-19 pandemic. 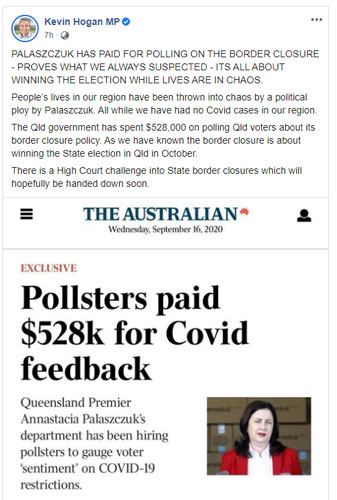 “This proves what we have always suspected,” Mr Hogan wrote.

“It’s all about winning the election.”

Ms Palaszczuk has consistently commented that all Covid-19 restrictions are based on health advice from Chief Health Officer Jeannette Young and her office denied the government had done polling to test community support for border closures in August.

Mr Hogan said the lives of residents in Northern NSW have been thrown into chaos by what he labels a political stunt by the Qld Premier, adding “all the while we have had no Covid-19 cases in our region.”

“Our region has no community transmission of the virus and we are not a hot spot.”

Queensland borders closed on March 26 as Covid-19 cases continued to rise before reopening to all states except Victoria on July 10.

However, the Queensland border was closed again to NSW and ACT residents on August 8 and all of NSW was declared a Covid-19 hot spot after several new cases were confirmed.

“This border closure is causing havoc across our community,” Mr Hogan said.

“There is nothing but heartache and damage being done to families health and livelihoods.

Ms Palaszczuk has also come under fire in recent weeks from NSW Premier Gladys Berejiklian and Prime Minister Scott Morrison over the hardship and turmoil caused by the border closures.

The Qld Premier has refused to back down and has previously hit out at the attacks against her government for their border measurements.

Mr Hogan has also questioned why the Qld Premier is “happy to open the border for AFL footy players but not for us (Northern Rivers residents) from a Covid-19 free region.”

“This might be playing well for the Qld Premier politically in the short term, but this border closure is unwarranted.”

In his statement, Mr Hogan said there is a High Court challenge into state border closures which he hopes will be handed down soon.