Author Greg Towner carrying a Schwonberg ship model to the Maclean Museum last week. It is too big to fit in his car. Image: Pam Moitie
Community News

The Daily Examiner on 6 August 2020 carried an article on a proposal that would see the SES Offices in Maclean move to Yamba, and the Fisheries Office move to the site now occupied by the SES. 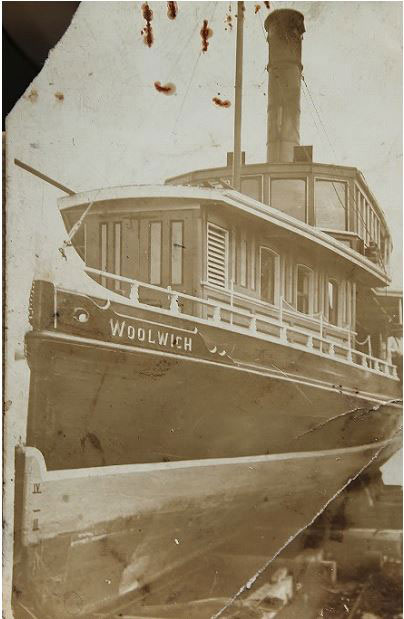 The delay in putting this into effect was due to a number of factors, according to the article, including that there are “heritage issues with the slipway on the mooted site”. Readers may not be aware of the heritage value of this slipway.

The slipway was installed in the 1890s by Francis Henry (Frank) Schwonberg, using a newly acquired hard hat diving suit to install the rails below water level. Frank’s father, Joachim Nicolaus Schwonberg, migrated to Australia in 1846 from Hamburg, Germany, at the age of 32, as a proficient ship builder and naval architect.

He went first to Adelaide where he built a yacht called Maid of the Mill and completed the construction of the Government cutter the Yatala, acknowledged as a very good and fast vessel. Joachim moved to Sydney and Brisbane Waters where he married a widow, Eliza Cantle, who had come to Australia from Sussex, England, in 1848 with her husband and two daughters. Frank Schwonberg was born at Brisbane Waters in 1853.

From the 1890s the slipway was used for the maintenance of many vessels, and the adjacent Lot now occupied by the SES would have been used for the construction of new vessels. The photograph shows the SS Woolwich on the Schwonberg Slipway for renovations, probably in 1914 when a wheelhouse was added on the roof of the top deck (shown here before the addition of the wheelhouse).

Joachim and Frank built many vessels, including cane punts, river droghers (workboats) such as the Fairtrader, and the well-known passenger ferry the Ibis, which operated on the Clarence for over fifty years, initially by Captain Frank Schwonberg, and ended its days at Copmanhurst. Another vessel, the Gannet, was sold to the CSR as a cane tug, and an auxiliary yawl called the Gulnare, built by Frank Schwonberg, greatly impressed Mr C.C. Bell, a pearl fisherman from Darwin, and he purchased the Gulnare in 1933 for his Darwin operation. 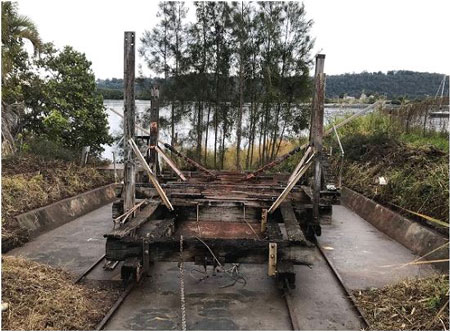 As well as boat building, Frank Schwonberg and later his youngest son Bruce, used the hard hat diving suit for underwater salvage and inspection work in the Clarence. Both men raised a number of vessels, most notably Frank raised the North Coast Steam Navigation Company’s S.S. Kallatina in Grafton, in front of a large crowd of spectators. Frank and Bruce’s diving equipment is now on display in the Marine Discovery Centre at Terrigal, NSW (see photograph).

On the closure of Schwonberg Shipyard operations in 1937, Bruce moved first to Cootamundra, but that would have been too far from the ocean for him, and he moved to Sydney and worked as a professional diver.

Frank Schwonberg married Ellen Stuart, whose mother Anne Hunter had come from Alloa in Scotland, and her father Dugald Stuart from Ardnamurchan in Scotland where his family had been evicted from their simple stone hut at a place called Bourblaig, in 1828, part of the Highland Clearances.

Despite their mainly English and Scottish heritage, the Schwonbergs, like many others with German names, came in for adverse treatment during the events of WWI and WWII. Frank Schwonberg attracted special attention when under attack in the media, particularly when he made the perhaps unwise statement at that time, that he was “proud of his German heritage”. The ship building skills brought to Australia from Hamburg and passed on to his sons and also his grandson, Stuart Towner, were and still are the source of much family pride.

Stuart Towner operated the slipway as an employee of first Harwood Shire Council, and then Maclean Shire Council, until 1973. The long period of operation of the business by members of the Schwonberg family, from 1866, ended in 1973. The slipway was later leased by the Clarence Valley Fisherman’s Co-operative from 1982 to 2012. 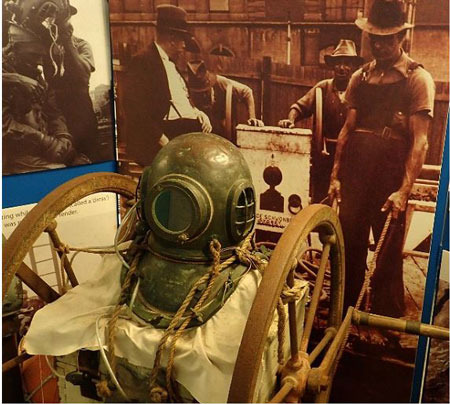 Frank and Ellen Schwonberg lost a five-year old child called Claude Greybrook Schwonberg when he drowned adjacent to the slipway in 1887. They named another son, born in 1889, Claude Greybrook Schwonberg, and he acquired the nickname ‘Paddy’. This Claude Schwonberg was killed during WWI on 9 October 1917 when serving with No. 17 Battalion AIF. Claude’s older brother, Dugald Stuart Schwonberg, had earlier been killed on the Somme on 15 March 1917, when serving with No. 31 Battalion AIF, adding to the injustice of the targeting of those with German names.

A grandson of Frank and Ellen’s, the third Claude Greybrook Schwonberg, also nicknamed Paddy, is now 91, and the last remaining male in Australia with the surname Schwonberg.

Of course, the Schwonberg Slipway in Maclean has great significance to the many descendants of the Schwonbergs, many still resident, in Maclean. The slipway can also be a significant reminder to members of the community and visitors of the time when river transport on the Clarence was so important. The site also featured in rowing regattas in the late 19th and early 20th Century, when the Schwonberg jetty was used as the starting or finishing point, often with local champions like Henry Searle or Mick Rush competing, and often with Frank Schwonberg officiating as starter and judge.

There is much heritage represented by the Schwonberg Slipway, complimented by the display of shipwright tools from the shipyard, and boat models used in planning the construction of vessels, both now on display in the Maclean Museum. Imagine if a vintage vessel were also on display or even available for cruises, visiting historic sites such as the slipway, the remaining pylons of the North Coast Steam Navigation Company’s pier in Maclean, Ashby Drydock, the Ashby ferry ramp (the Schwonbergs were called on to use their diving equipment to release this ferry’s cable from beneath a rocky reef, on at least one occasion with a young Stuart Towner manning the air pump) and nearby the site of the first boat building operation in Maclean of Edward Chowne, the Illarwill Quarry, the location settled by the first European settlers to the area on Woodford Island, the Smalls, and even the site of Pullen’s ferry service at Cowper, and more.

Might the M.V. Beardmore float again, the last tug operated by the CSR Company on the Clarence and on display by the Maclean Museum in a shed near the mill at Harwood? Might the Yamba Iluka ferry company consider such a service?

The Schwonberg Slipway is currently not open to the public, but can be viewed from the river or through a fence at the end of the lane which passes the old Schwonberg residence and the SES offices, near the bottom of Church Street.

Clarence Valley Council is to be congratulated on seeking to obtain heritage listing of this slipway and thanked for the time and ratepayers’ money already invested.

The slipway is as original from the 1890s, but with some modifications to the cradle by the Fish Co-operative. This is not the case with the slipway at Port Macquarie, which is already heritage listed, Hibbard’s, and is smaller and more recently refurbished. The Schwonberg’s vessel the Ibis was built of local spotted gum, regarded as very suitable, tough and durable timber, and maybe the slipway cradle was built of the same timber.