Busways driver Peter Perkins has retired after working for almost forty years in the transport industry throughout the Clarence Valley. Image: Contributed.
From the Newsroom Local News

After swapping his butcher knives for a bus driver’s license, Grafton local Peter Perkins went on to enjoy a career in the transport industry which spanned almost 40 years.

On September 25, Mr Perkins, arguably one of the most popular bus drivers in the Clarence Valley, turned off the ignition for the last time. 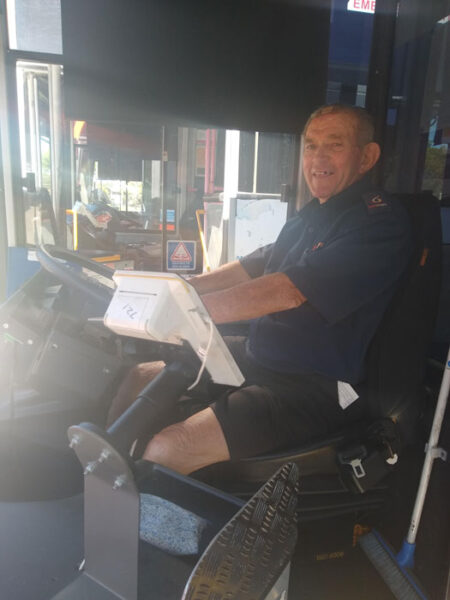 After beginning his bus driving career in 1981 with Grafton Bus Company, Mr Perkins then worked for King Brothers when they assumed ownership of the former local business before Busways took over several years later.

Although he admits he will miss the companionship of his fellow drivers and the smiling faces of the passengers, Mr Perkins is looking forward to starting the next chapter of his life.

“I had actually planned to retire a couple of times in recent years, but they (Busways) talked me into staying longer,” he confessed.

“I loved my job and I always enjoyed my work.

“Busways appreciated me in return which was a good working relationship to have and one of the reasons why I continued working.”

Although he started working as an apprentice at his father’s shop, Perkins Butchery in South Grafton, Mr Perkins said he always wanted to be a bus driver.

“My uncle owned the former Yamba to Grafton bus service which was operated by Quinns and I always had an interest in buses,” he said.

“I was 41 when I got my license, started driving and doing some casual work and it grew from there.”

While he didn’t miss his butchering days, Mr Perkins is adamant there is much more to being a bus driver than sitting behind a wheel and steering a large vehicle.

It’s a role of responsibility.

“Passengers trust you to take them where they want to go safely and parents rely on you to look after their children while they’re on the bus.

“I always went to work to do my job to the best of my ability and you get back what you put in at the end of the day.”

Mr Perkins also spoke graciously of the passengers who frequently complimented him at the end of journeys and wrote favourable letters about him to the manager at Grafton depot.

“It was always very rewarding and it made the effort worthwhile,” Mr Perkins said.

“It was good to receive nice compliments and to know I had made people happy.

“That’s probably one of my best memories.”

There have also been many changes to the vehicles in the transport industry since Mr Perkins first sat behind the wheel, especially the introduction of modern coaches with automatic gearboxes and air conditioning.

“They were nice and much quieter to drive,” he said.

Mark Lawrence, Regional Support Manager for Busways said Mr Perkins had been one of Busways longest serving employees across the company, and definitely one of the longest serving at the Grafton Depot.

“Mr Perkins’s decision to retire and enjoy the next stage in his life with his family and the community will be a highlight for him, but a great loss for Busways,” he said.

“The community sentiment towards him over the past week has been really nice to see and on behalf of Busways, I just want to thank Mr Perkins for his years of service to the company.”

“We’ll fill in time and stay out of trouble,” he said good naturedly.