Michael Williams at the Yamba trawler dock, where a plaque has been set in stone to mark Charlie Picton’s tragic death. John Moore from the Maclean Probus Club says a recent performance of the book at a recent club meeting was “real quality in my opinion, and he does it so well; everybody listened intently; you could hear a pin drop.” Image: Geoff Helisma.
Latest News

At about 2am on Wednesday February 27, 2008, Michael Williams was asleep in the forecastle of the trawler Sea Rogue. The trawler’s nets, which snagged on the sea bed, and a strong ocean current combined to capsize and sink the trawler.

There were explosions, then it was pitch black and water was pouring into the cabin. Williams pushed the trawler’s captain, Charlie Picton, through a hole in a cabin window and then followed, his legs cut and bleeding by broken glass.

Under a “slight moon” Williams and Picton found each other on the surface 16 kilometres offshore from New Brighton. A third man, deckhand John ‘JJ’ Jarrett, was clinging to a red tub – everything else sank to the bottom. The three Lower Clarence men clung to the tub until the sun rose; after which Williams decided to swim for help.

After an epic 10-hour swim, he made it to shore at New Brighton at about 4pm and raised the alarm. He was bleeding and was clothed in just a singlet, which he took off and wrapped around his waist after the first people to see him fled at the sight of his nakedness.

John Jarratt was found and rescued at about 8am on Thursday February 27 – he was located about 8km offshore, north of Lennox Head. The search for Mr Picton continued throughout Thursday, but he was never found.

The Royal Humane Society of NSW awarded Williams a Bronze Medal in December 2010 and, in 2012, he was one of 19 Australians awarded a Commonwealth Bravery Medal.

Now, Williams has written a book, one that tells his story in ‘spoken word’ form.

Hey Charlie, it’s time to haul the nets in,
With his devilish grin,
With his big hands on the big winch,
It comes alive as it crackles, screams and moans like it’s on fire,
To catch the prawn, that’s Charlie’s desire.

William’s sounds a lot like Tom Waits when he recites the opening stanza. “I speak a bit of ‘pirate’ [Picton flew a pirate flag on his trawler], a bit of normal speaking … a bit of everything,” he says of how he performs the text from the 50-page booklet. There’s pathos aplenty in Williams’ words, and insight, too.

I look into their eyes, their lives are fading thin,
I’ve been treading water all night.
Now I must swim.

Pickering and Williams grew up together. “Charlie and I met in an extra reading class at school,” says Williams. “We weren’t good at writing and spelling. I was hopeless at reading and still not that well at spelling. What do they call it? Dyslexic (laughs).

“I didn’t like school back then. I was pretty bad. It wasn’t a great experience, but… anyway. We used to hang out on the front street there in Yamba, as you did as teenagers. He would always come into my life somewhere.

“When I just go back from the Snowy, he was up at the pub [in December 2007] and that’s where he asked me to jump on the Sea Rogue.”

Quiet little Mullumbimby Hospital has gone mad,
Twenty news reporters crawling the walls,
Sneaking in, fighting over my bed,
Whispering money in my head,
They are the real sharks on earth,
My friends could be dead.

Williams says he has had great support and help to finally complete his book: Peter Ellem, who “helped with spelling and punctuation, etcetera”, and John Howland; “we worked together to design the artwork; he’s good on the computer and great to work with”.

But just let go, let go,
Slowly he descends into the endless abyss,
The body surrenders to the ocean,
He gives his life, his body a sacrifice to what he loves,
He is free, a mate’s burial at sea, for Charlie.

…JJ, a survivor,
And this morning shines a beautiful day for him,
The quietness of the morning breaks, with a zzzzzzmmmmm,
A plane shoots past him, turns around and dips its wings to tell him
He’s been seen, circles around him, then off it goes.

The book is available at Yamba’s Book Warehouse and soon at other Book Warehouse stores in Lismore and Coffs Harbour. It’s also at the newsagent in Maclean and several other random stores in the Lower Clarence. 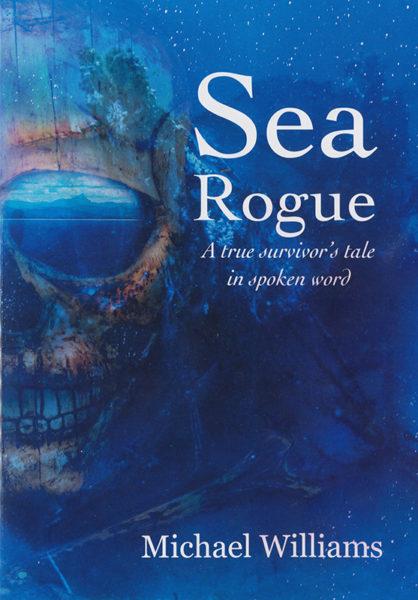