Grace + Hugh will perform three times this weekend, in conjunction with the Plunge Festival: Friday and Saturday nights at Wooloweyah community hall and on Sunday at the Yamba River Markets on the Plunge Festival stage, along with Tullara, Anna & Jed and Coalby – from 9am to 2pm. To book tickets for the Wooloweyah shows call 0488 013 067: RSVPs essential, seating limited, BYO drinks and nibbles. Image: Contributed
Latest News

Grace Hickey was the ‘face’ of Clarence Valley Council’s Plunge arts festival in 2016 – this weekend Hickey, along with her musical partner pianist Hugh Scott Murray and drummer Murray Sheridan, will perform three times: two night-long sets at the Wooloweyah community hall and a 45-minute festival set at the Yamba River Markets.

At the end of 2014 Hickey had completed her HSC at Maclean High School; her achievements were notable: she was ranked fifth across the state in visual arts (with a score of 99), scored 96 in music and was in the top band in the five subjects she studied.

Hickey had applied to study law or fine arts at QUT, but planned to defer for a year to work on her art and music. By year’s end, following “a lot of gigging and travelling” she realised she “wasn’t going to do law”; however, she was awarded a scholarship to study fine arts at the Queensland College of Art in Brisbane.
Meanwhile, Murray, a seasoned, internationally-travelled and celebrated musician (the mastermind of the ‘swing’n’roots’ Big Ol Bus Band and co-writer of songs with the likes of INXS, Lou Rawls and Keith Urban), witnessed Hickey performing one of her songs at a mutual friend’s wedding in Yamba.

“When it comes to the creative process I’m always looking for someone to spark off creatively,” says Murray. “I realised quickly that Grace was an old soul when it comes to song writing and she has great ideas.”

Subsequently, Hickey says, “I would send him things I was working on and we continued our dialogue. In early 2015 I sang with the Big Ol Bus Band at the Thredbo Jazz Festival. We started collaborating on songs together.

“We did the Slipstream project [recorded with the Mid North Coast Sinfonia and Sydney Symphony Orchestra conductor Guy Noble] where we wrote a song about living and working on the river in the Great Lakes region” for the series, ‘Roll or Rust’.

This catalysed a concept: instead of recording in the studio, the great outdoors beckoned.

“Earlier this year we took an old upright piano west to the Liverpool Plains and did some impromptu writing and performing,” Hickey says, “in paddocks, back roads and bushland.

“The recording process was just going to be some piano and vocal arrangements; some stuff we’d been working on. It kind of just snowballed – we ended up getting a full band in for the tracks and arranging them into quite a big record,” the self-titled Grace + Hugh.

The years that separate their birthdates are bridged by shared creative compunctions and goals. “When two people find common ground creatively and spark off each other, then it’s really … about what they bring to the creative partnership,” says Murray.

“We’ve both learnt a bit from each other in the process,” says Hickey. “Hugh definitely is a pretty big inspiration to me: learning how far to push a song, how far it can go and making the recording the best it can be.”
“The plan is to find an adventure in music and not just being about recording an album and gigs,” says Murray. “It’s about starting a creative, musical odyssey. Heading out west and overseas and putting ourselves in a position to meet people we wouldn’t normally meet.”
Murray recalls hauling his piano out to Nundle in the New England region. “Recording in a state forest among the pine trees in the middle of nowhere makes you feel like you’ve gone somewhere and put yourself in a position not normal, creatively,” he says.
“I think that can add so much to the song,” says Hickey, “making something a bit more unique than we’d get in a commercial studio.”
Hickey completes her studies in October this year and it all parlays into her music career. “I used both disciplines [art and music] in putting the project together,” she says, “to design the album cover and website.
“I’m glad I embarked on the degree and, now, I can move forward with music, using what I’ve learnt studying fine arts, majoring in drawing.”

Listen to the Grace + Hugh’s debut album at www.graceandhugh.com 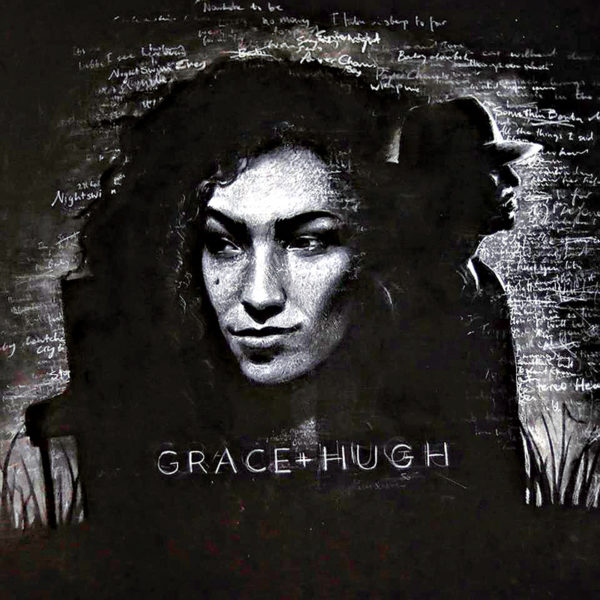