Brushgrove couple Glad and Rick Smith are looking to start up a Clarence Valley Club for 1 metre radio controlled yachts, with anyone interested urged to contact them. Images: Contributed
Sports

Former yachtsman Rick Smith and wife Glad are hoping to form a club in the Clarence Valley, for other sailors interested in 1 metre radio controlled yachts.

Rick, who comes from a sailing background and has competed around 20 times in the Brisbane to Gladstone yacht race as well as the Brisbane to Osaka yacht race, was forced to scale down his passion for sailing after surgery to install a pacemaker, earlier this year.

During his six week recuperation, Rick spotted something on the internet about the national competition for 1 metre radio controlled yachts, which was running in Tasmania and since then, they have been hooked.

The couple became members of the nearest club which is in Ballina and each Saturday they travel up to race.

“They are an ‘international class’ model yacht,” Glad said.

“The rules are the same as international yacht racing apart from only having to do 360 degrees, for penalties and buoy room rules.

“To get into the sport, yachts range upwards in price from $800.

“Rick is doing quite well in the Ballina Club and I’m the only woman competing at the moment and have also won a few races,” she said.

The couple are looking for anyone interested in forming a 1 metre radio controlled yacht club in the Clarence Valley, to contact them. 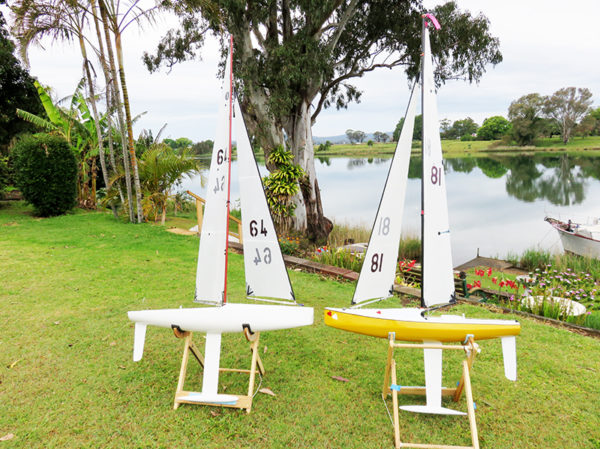