Michelle Ryan was always going to have music in her life. For Harwood Island’s Ryan family, music has long played a pivotal role in day-to-day life. “You won’t find a Ryan in the [Lower Clarence] area who doesn’t have an instrument of some kind,” she says. Sitting on the front veranda of her family home, Ryan points to the neighbouring property. “My Dad, he grew up in that house over there behind the shed. All those kids grew up playing guitars and pianos.
“When Mum started the family, they all sang, so I grew up with Dad with a guitar and singing and Mum singing. She thought it was really important for us kids to learn instruments, so I started piano when I was eight. At the end of my piano lessons, sometimes my teacher would say, ‘Would you like to sing a song?’ So I’d pull out a song, but I never really did anything with it until I started high school.
“I just always really loved music. My cousins, they’re all musical as well. We all played instruments together. My brother plays guitar, so … it’s very cool.”
Back in the mid 1970s there was an advertisement on Australian television that implored viewers to ‘have a go’ (more recently it was former treasurer Joe Hockey’s mantra). It’s a sentiment that underpins Ryan’s career path. “If I aim really high, that’s good,” she says, “but I tend to be content with where I go because I often get surprised. I’d like to be singing on one of the best stages in Europe; but if that doesn’t happen, I won’t be upset.
“I’ll be happy with whatever comes my way.”
She believes that if she immerses herself in her work, the rewards will come. “That’s been how it has worked. I’m also a Christian, so I believe that there will be something that I don’t know that is coming. I’m trusting that God’s got a plan for me to do something. It’s been pretty cool to not know where I was going to be when I was 17 or 18; I couldn’t have imagined that opera would be what I was going to do. It wasn’t my dream at the age of 17.”
During Ryan’s HSC years at Maclean High School, she was tutored by Lynne Phillips, who taught singing in Yamba. Phillips introduced Ryan to classical singing, but she “still had a heart for pop”.
“I wanted to be a pop singer and I did the Sydney School Spectacular and I thought, ‘I really like this’. When Lynne moved to the Blue Mountains, she suggested that I go and see a teacher named Gayna Donnelly, who used to teach at Grafton Conservatorium before she moved to the Gold Coast. Every third week I would get in the car, have a lesson with her and then drive back in time to work at Causley’s.”
Donnelly, too, encouraged Ryan to consider singing opera. “She showed me some YouTube videos. One was of [American soprano] Barbara Bonney. When I heard that I just fell in love with opera.”

“At the end of the five-week program they invited agents to come and mock audition us – for pure, honest feedback – so we knew what a current agent of today thinks (laughs). The first agent that came was in the second week [to get a feel for what was coming]. He just started speaking to us in German. I thought, ‘Oh my gosh, I don’t know what he is saying’, but I just had to get up and introduce myself in German. Since returning to Australia, Ryan has completed an intense intermediate German language course.
“On the very last day when the audition agents came, I got the first one; it was about 10 o’clock in the morning. I had what is called an audition aria package – that’s six pieces that you can choose from to sing: you get to pick the first; they pick the second – so I sang what I wanted to sing, then they chose what they wanted me to do. At the end we had to sit down at the table with them and they would talk to us, but we had someone translating.
“The directors of our program, they said: ‘Oh, Michelle they’re actually really interested in you, they want you to come back and sing for them next year.’ I said, ‘Oh, oh, okay, I didn’t realise that.’ I had no idea, I thought this was just a practice, but they said, ‘No, no, we think you’ve got the right height, the right stage presence and all of the roles you have on this list here are perfect for your voice type. Don’t leave it much later than the age of 28 to come back. There are already a lot of people working at your age, so get back here as soon as possible.’
“I went home, back to Sydney, but I’d already made my decision in Germany, I thought, ‘I really should do this’.” She says this with real purpose, like nothing can dissuade her from her mission.
“They said, ‘If you are coming from Australia and you need some structure to get started; why don’t you jump into a master’s [degree], to get you singing everyday and taking classes. In the meantime come and sing for us and we’ll introduce you to agents and directors and hopefully get you into the profession.’ They basically want me to get a better idea of the culture and how things work.”
Ryan confesses, however, that she doubts she’ll “do the two years”, which is due to start in March 2016, should she be successful in signing a contract with and opera company during that time. “The good thing is, she says, “that education over there is free.
“I want to go and immerse myself in it and experience it. I don’t think I would want to live there forever (laughs). I’m hoping to go on stage at the Vienna State Opera, but who knows, I could be doing something completely different. This opportunity that has come; it’s not easy, and it’s really something you need a whole year to prepare for. But I’m seeing it as a door that’s open: I’d better jump in and keep the momentum going; because if I shy away … that door could close.”
Ryan’s mother, Pearl, says she and her husband, John, have actively encouraged their children to play music –all started piano lessons at the age of eight. “John, he’s from Irish decent, so music has always been in the family. For me, my parents sang; my father was in a choir in England, my mother sang, and I think music has always just been there; it’s just in the soul.”
She says the family’s musicality is “wonderful”.
“There’s music in the house all of the time and they’re not on Play Station or doing computer games or TV; they’re doing something that is constructive. Then they go out and they are a part of the community and they love it.
“Breanna is doing a gap year and she plays [cello] for weddings and functions and she plays in the Lower Clarence Community Choir and theatre productions. Daniel didn’t pursue music once he left home, but growing up he did: piano and guitar.”
Ryan flew to Germany on December 16. 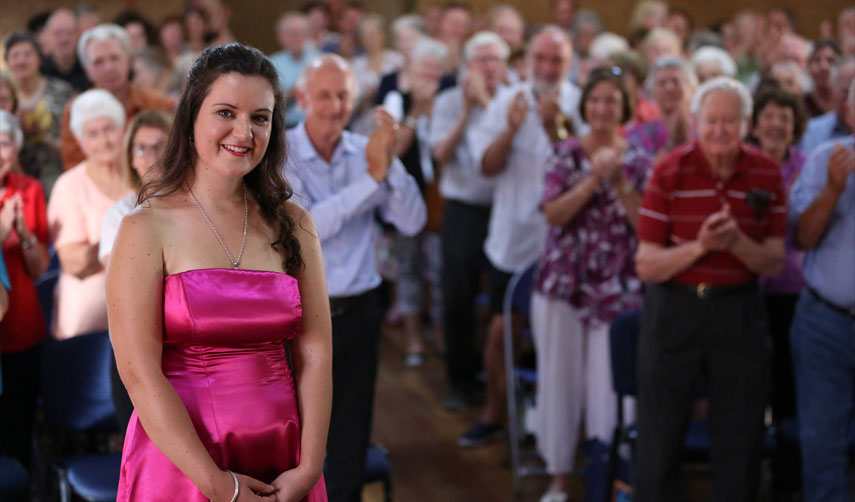