Let’s start with controversial statement: “Koalas are diminishing in northern NSW because there is too much land that is already set aside as National Parks.” I can feel the hackles rising already.

Unfortunately, there is a belief that sticking a sign in the ground saying this is “The Whatever NP” and leaving it to look after itself will result in it thriving forever after. That’s not so.

Back in ‘75 a conservationist friend pointed out: “If a designated area is made a park then unless it receives appropriate support, it will eventually fail.” And these days governments support for onsite “maintenance” is insufficient, and commercialisation is a no-no.

From all the parks I have visited around the world my local NP, Yuraygir comes in last. It was created in 1980, from combining Angourie and Red Rock NMPs into a single 314sqkm (equal to the area of all our cane-fields), NP. It also encompasses 90% of the CV coastline. Overall, it has been left to look after itself both financially and by decree, and it shows. Its major species (and who knows how many minor ones) have diminished. There has not been a koala sighted in it for yonks, and the coastal emu is effectively extinct. I’ve had more roos and wallies in my back yard, than I’ve ever seen in the park.

Weeds and feral animals are no doubt a major cause, but so is neglect. Try and go for a walk in the park off the beaten track. After getting through the barbed wire fence, (which stops people but not ferals), it can be impossible to proceed across the landscape.

There is another limitation. Water. The park basically runs from a ridgeline to the sea and in dry periods there is no surface water on it. I asked a ranger I know:

“Is there any permanent water in the park?”

“Why not put in some water troughs or whatever?”

“That would not be permitted, but the emus can usually get a drink over in the cane fields.” Really!

I was staying with a keeper, at a lighthouse, which was in a NP. It was very dry and the keeper put out a dish of water. A ranger came by and told him to tip it out because “In NPs the life in them have to survive on what nature provides.”

Says it all doesn’t it?

No wonder the emus cross the Brooms Head Road and in current photos, they’re in the cane-fields.

According to a long-time forester “In the State Forests there are more koalas than in the NPs, because the forests a provide a better habitat for them (less forest floor trash). This is important because koalas use the ground to move from tree to tree (no they do not swing from tree to tree like orangutans).

Foresters do more hazard reduction to reduce the fuel load” and there are cleared harvested areas. Also, koalas can belt along at 30kph across open spaces, which can help them escape fires, but with the ground litter that clogs the NPs, it’s like being in a burning house, with the passage way out being full of 20 years of old newspapers, magazines and other litter.

Making the forests NPs, will not only destroy a major industry in our area, (we might run out of wood to make toilet paper!), but the koala’s will inevitably diminish as the increasing fuel load is creates a much hotter fire and hinders their mobility.

So, 15-20 years of becoming a NP their koalas will be decimated by the next over-fuelled, uncontrollable unescapable bushfire, just like they were in 2019-20.

So, what is the solution to this situation? Start “farming” (now there is an inflammatory word), the parks. This includes the removal of weeds and ferals (by registered exterminators), the planting of vegetation appropriate for the area’s wildlife, allowing controlled grazing (which also provides money), the establishment of permanent water supplies, the creation of safe breeding areas, similar to what the Australian Wildlife Conservancy does, and providing people friendly access and amenities. And of course, carrying out major fuel reduction.

“But we don’t have the money!” Well reduce the size of the parks to a supportable level. Having a prosperous small park is better than having a large sterile one. The importance of the number of square kms is about as appropriate as Imelda Marcos adding more footwear to her shoe collection.

The Nationals, and in particular Chris Gulaptis (good for you Chris), have pointed out correctly that converting State forests to NPs and forcing landowners to monitor and maintain koala numbers on their properties is inappropriate. Just look at the map to see how much forest is left after the light blue forest (174,000 sqkms of it) is incorporated into the NPs.

It’s just mixture of political point scoring, passing the buck, and koala lovers (unfortunately), being over altruistic. The end result is it destroys jobs, the vitality of our area, and has bugger all to do with helping the survival of our koalas.

The following map shows very clearly that if the State forests in this area (light blue) were converted to NPs there would be literally no timber industry. And it doesn’t even show the impact of forcing farmers to monitor and preserve koala habitat on their properties. 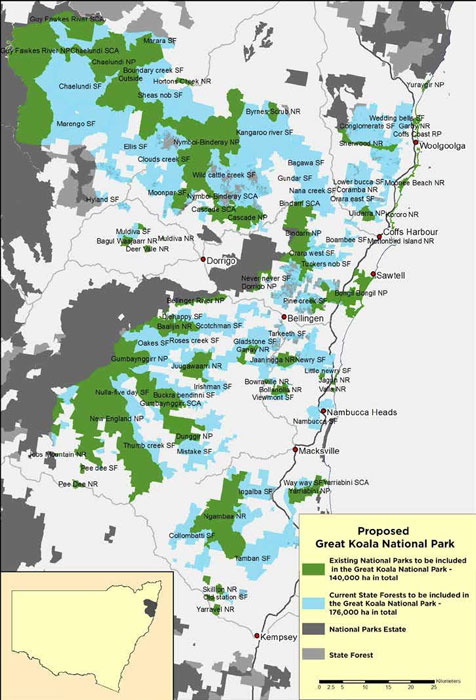 And is this new 315sqkm NP really prime koala habitat? Since I was a kid, we were taught that koalas would only eat 1 or 2 kinds of leaves, but apparently there are many more eucalyptus that they munch on, with 123 being the current magic number. I would like to see the published, peer reviewed research on this including the relevance of each species. Sounds more like creating a carte blanche land grab to me.