There were celebrations all around the Clarence Valley last Friday as the community celebrated Australia Day.

The Port of Yamba Historical Society, was one of many venues around the valley, to stage a Flag Raising ceremony.
As the large crowd slowly gathered, they were treated to the wonderful music of Paul Commerford and Rob Imeson.
President of the Port of Yamba Historical Society Lesley Pickering welcomed everyone, before Uncle Ron [Heron] gave the Welcome to Country.
The Flag Raising ceremony took place across the road in Story Park; watched on by the crowd.
Talented young singer Piper Ramsey led the singing of the National Anthem which was followed by the inspirational address by Clarence Valley Councillor Karen Toms entitled, ‘Challenge your Thinking’.
The ceremony ended with a beautiful song written and sung by Rob Imeson; Valley of Gold.
Rob said that his song [which was released on Australia Day] is written about the Clarence River.
“Yaegl Elder Reverend Lenore Parker asked me to write a song about the river for our young people,” said Rob.
Rob’s beautiful lyrics and song, was very well received. 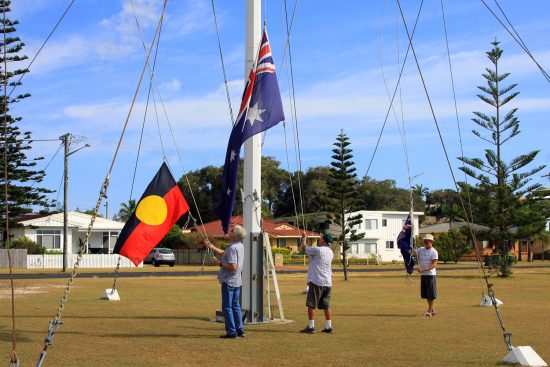