The swollen Clarence River spilled over the roof of the Grafton Rowing Club and nearby footpath at Memorial Park in Grafton on Tuesday morning. Image: Emma Pritchard
From the Newsroom

Major flooding is occurring throughout the Northern Rivers region this week after high moisture and a low-pressure system generated widespread rainfall.

Yamba was among the hardest hit with the coastal town recording 532.6mm of rain in the 48 hours to 9am on Tuesday morning.

The adverse weather has closed several local roads and main thoroughfares, isolating a number of communities including Yamba. 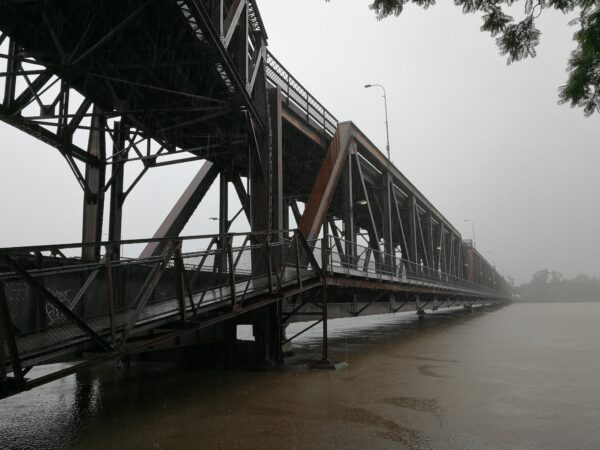 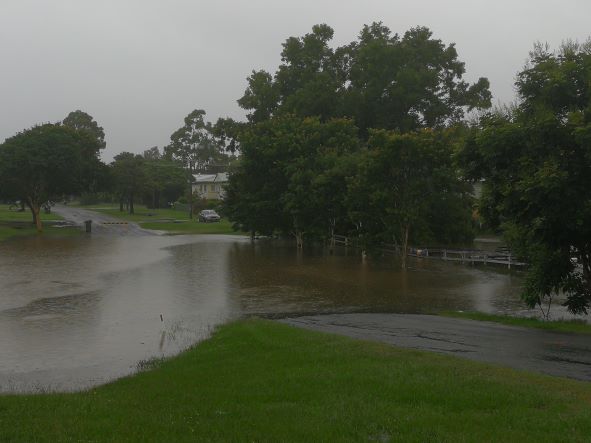 Evacuation centres were set up at the Grafton Racecourse, South Grafton High School, Maclean Showground and Iluka Bowling Club as the Bureau of Meteorology revised an expected peak of 7.4m at the Prince Street gauge in Grafton with conditions easing into Monday night.

Flood warning number 23, issued by the Bureau at 2am on Tuesday, confirmed the Clarence River peaked near 7.66m at the Prince Street gauge in Grafton at 1am with major flooding.

Further downstream, the Clarence River breeched the Ulmarra levee more than two hours before the predicted high tide during the early hours of the morning, peaking at 6.00m and inundating the riverside community.

At the time of publication, the Clarence River was predicted to peak at 3.30m in Maclean on the high tide with major flooding.

At Glenreagh, the Orara River peaked at 12.17m on the Glenreagh Automatic gauge at 11:30pm on Monday, and at 9.50m at Glenreagh Bridge (manual flood gauge) shortly after 12am on Tuesday morning with moderate flooding.

The Bureau forecast a predicted peak of 12.80m for the Orara River at Coutts Crossing on Tuesday evening with major flooding.

State Emergency Operations Controller, Deputy Commissioner Mal Lanyon, said emergency services are continuing to assist people isolated and impacted by floodwater, and he is urging residents to be patient during this severe weather event.

“NSW Police are poised to assist the SES and we are currently working with them to assist as many people as we possibly can,” he said.

“There are more than 15 flood evacuation orders in place for the Richmond-Tweed and Clarence-Nambucca regions.

“We continue to remind people to act responsibly and not to enter floodwaters.”

“The power of the water and how fast it moves is really quite scary,” he said.

“I’ve never seen a flood here before and I’m feeling pretty bloody thankful that I bought a house high up on a hill.

“I just hope everyone stays safe and follows the advice they’re given.

For the latest weather warnings and updates, please visit www.bom.gov.au and www.ses.nsw.gov.au

If your life is at risk, dial Triple Zero (000) immediately.