The high number of vehicles – and behaviour of some of the drivers – on the beach north of Brooms Head during the holiday period has raised the ire of some residents who regularly walk the beach. Four-wheel-drives have driven very close to the frontal dune. Images: Stephen Otton
Latest News

Virtually no swell and wide beaches stockpiled with sand, due to favourable conditions leading up the Christmas holiday break, combined to create a virtual welcome mat for visitors driving four-wheel drive vehicles during the holidays.

However, their alleged irresponsible behaviour has aroused the ire of some Brooms Head residents.

As a result, a public meeting about the issue will be held at 10am in the Brooms Head hall this Saturday February 10.

John Giese, who is organising the meeting, said the “the vibe on the beach has changed with more cars running on it”.

“It’s not relaxing when walking along the beach, you don’t see birdlife anymore and have to watch out for cars; it’s turned into a highway.

“They didn’t even consider the people walking on the beach – if allowed to go on it will get worse.”

Mr Giese said he had invited councillors to attend the meeting; and council staff, too – he had not received a response regarding staff attending at the time of going to press, several councillors had indicated they might attend.

Clarence Valley Council (CVC) monitors the vehicle-permitted beach, which extends from Lake Cakora at Brooms Head to Red Cliff in Yuraygir National Park; the National Parks and Wildlife Service (NPWS) monitors all other beach access in the park.

The council also monitors accesses at Wooli and the boat launching area at Minnie Water. 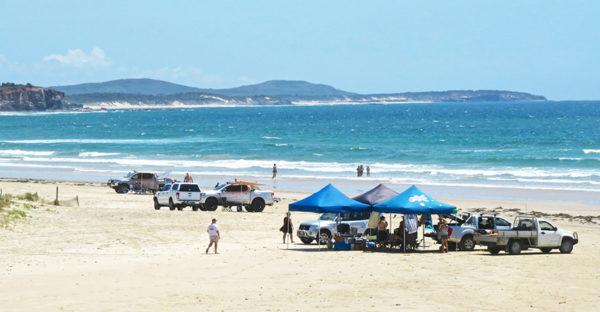