The Club Veteran Singles Championship was finalised last week with Neville Hillyard defeating Ray Schafer in the remaining semi-final on Wednesday by 21 – 12. Nev subsequently earned the right to challenge Bob Ballantyne for the championship and the title of club ‘paterfamilias’ for the next 12 months.

This championship is unique as it is open only to members that have reached 75 years of age or more by January 1 in the year of play, it is also contested over 21 ends of play.

The final was played on Friday morning, October 22, under pretty good conditions. Nev and Bob both displayed the silky skills that warranted their place in the final but, as the game developed, it was Bob who managed to seize the initiative and control of the scoreboard. Bob maintained this advantage taking the match by 22 – 11 in a vintage veteran’s final.

The 2021 Stan Brown Shield was contested on Sunday October 24. This is another intriguing event being a box-draw, two-bowl triples competition played over three rounds.

The field this year was a little reduced due to the current COVID restrictions, but the members who did participate ensured that the standard of play, competition and camaraderie was maintained at the highest level.

Twelve teams were formed for the three rounds of battle and after round one it was the experienced trio of Allan Marr, Greg Johnson and Bob Ballantyne who were clubhouse leaders with an authoritative 20 – 5 win over Phil Maddison, Ron Smidt and Terry Johnson.

Bob and his boys repeated the dose when they confronted Trevor Allen, Dave Atkinson and Ian Parker in round two, taking the points with another commanding 20 – 7 victory.

In addition to the ‘Ballantyne Brigands’, the teams of Keith Smith, Paul Conley and Col Lindsay; and Chris Muldoon, Bruce Blanch and Tracey Jenner also remained undefeated after two rounds. In a quirk of the draw, Bob and his team were up against Col Lindsay’s side while Tracey Jenner and his side confronted Ian Parker and company in round three. 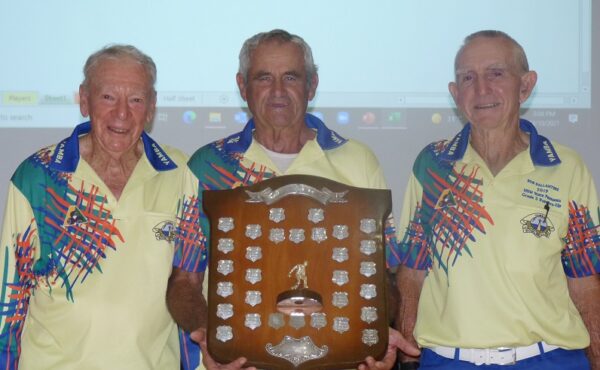 The Mixed Pairs Championship quarter and semi-finals were played on Saturday October 23 with an almost continuous bevy of brilliant bowls sent down the greens as the mixed gender pairings continued their quest for club glory.

The good news for the remaining competitors was that Bob Ballantyne had already been eliminated and could not attempt securing three championship titles in a week.

The quarter-finals produced some remarkable bowls and fascinating results: Roz Moore and Brad Johnson overcame Kay Mason and Don Plummer by 22 – 17 in an extraordinary game; Robyn McPherson and Ron Smidt teamed seamlessly to defeat Gloria Davis and Phil Maddison by 28 – 5; Monica and Ian Parker displayed nerves of steel to conquer Sharon Moore and Jim Johnson by 18 – 13; and Barb Backshall and Steve Butler continued their impressive form to prevail over Cathryn Aitchison and Alan Abbott by 25 – 23.

The semi-finals promised plenty and delivered abundantly. Robyn and Ron continued their all-conquering demeanour when they briskly and ruthlessly disposed of Roz and Brad by 25 – 9. Monica and Ian displayed great harmony and control but had to dig deep to overcome the vivacious combination of Barb and Steve. The final score of 20 – 16 allowing Monica and Ian to advance to the final against Robyn and Ron.

The not-to-be-missed final was played on the morning of Saturday October 30, in almost perfect conditions with only the fluctuating breeze spoiling an almost perfect setting.

The ‘Team of Fate’, Robyn McPherson and Ron Smidt, who were not originally playing together but were united by an act or acts of fate, were up against the experienced husband-and-wife duo of Monica and Ian Parker in a game that promised to be a thriller … and a thriller it was! After 18 ends of high calibre pairs play, Robyn and Ron led in a low scoring game by a single shot, 13 to 12. However, an unfortunate turn of events on the next end provided Monica and Ian with a two-shot haul and control of the mat. In fact, this was the first occasion throughout the entire contest that Monica and Ian had been in the lead, and they were committed to make the most of the opportunity. The result was in the balance until the very last bowl and when the clippings settled, it was Monica and Ian who prevailed 17 – 13.

The final, like most of the preceding games, was a classic display of quality bowling ability and outstanding sportsmanship, congratulations to all involved. 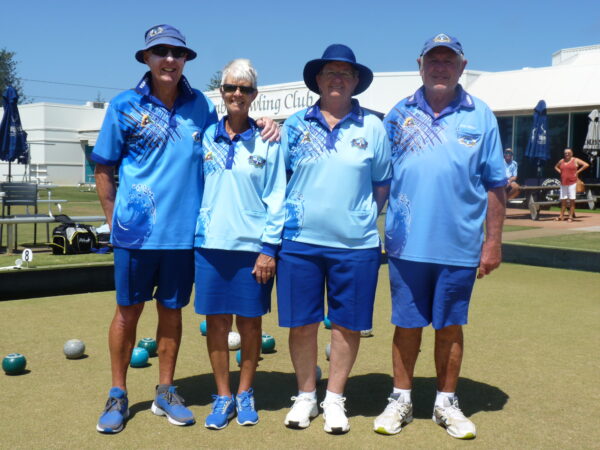 The first round of the 2021 Consistency Singles Championship was completed on Sunday October 31 with the innovative conditions of play causing some concern for the field of very capable bowlers who entered the championship event. After the first round 16 competitors remain.

Round two will be played on the morning of Sunday November 7 followed by the quarter finals in the afternoon. The semi-finals and final are scheduled for Saturday November 20 commencing at 9am and 1pm respectively.

Saturday November 20 will be a very busy day at the club with the annual visit by the Tweed Heads/Coolangatta Travelling Bowlers locked in to commence at 1pm. All members, families and visitors are welcomed to participate in an afternoon of incentive-based social triples. This is another opportunity to display the Yamba Prawn Stars shirt when we contest the perpetual Tweed/Yamba Challenge Trophy. The participation sheet is on the bowls bench.

The 2021 One-Bowl Singles Challenge for the Bob McKibbin Memorial Trophy will be held in conjunction with the visit by Tweed Heads/Coolangatta. Details of this event and the associated arrangements are on the bowls noticeboard.

The Annual Presentation and Awards Dinner will be held on Thursday December 9, at 6pm for 6.30pm. Cost is $30 per head which includes dinner, a free beverage and an entry in the luck door prize, plus a night of fun, frivolity and laughter with your family and friends. The evening will feature the presentation of all 2021 women’s, men’s and mixed championships and awards. Plus, it is an opportunity for all members to celebrate a great achievement in completing the full bowls program under sometimes difficult and challenging circumstances. Attendance can be confirmed at the ‘cash office’.

The 2021 Happy Ham Day will be held on Sunday December 12 commencing at 1pm. The participation sheet is on the bowls noticeboard.

Social bowls continues with mixed bowls on Tuesday morning, men’s pairs on Wednesday afternoon and men’s triples on Friday. Members are reminded that nominations can be made by telephoning the Bowls Office on 6646 8669 or by recording participation details on the nomination sheet adjacent the Bowls Office (the club is open at 10am) prior to 11.30am on the intended day of play.

Results for this week’s men’s social bowls are: