“You’ve unleashed a monster!” My comment to my wife, Janine, was ruefully cast – but she didn’t miss the tiny teasing twinkle lurking in the corner of my eye.
Janine had set out to add a little brightness to the old, tired, drab décor of the church’s op-shop. The New Year break had offered such an opportunity, together with the fact that a number of wonderful willing helpers were on hand.
But with such a mammoth task before them, it begged the question: Where does one stop?
That was the concern uppermost in my mind as the first brushstrokes of promise were applied. I was aware that brightening up one section of the shop would bring into even sharper relief, the shortcomings of the rest. As a consequence, it would become very hard to resist extending the exercise to incorporate the adjoining section. Then the next; and the next; and so on.
So, what started out as a small exercise in refreshing one particular area, the entranceway, quickly became an almost full-scale re-decoration of the entire shop – a task that could be favourably compared with the refreshing of the ceiling of the Vatican’s Sistine Chapel!
Almost, but not quite! This fanciful comment serves to remind me that some years ago, an angry man rushed through the Rijks Museum in Amsterdam, ran up to Rembrandt’s famous painting ‘Nightwatch’, took out a knife and slashed it repeatedly before he could be stopped. A short time later, a distraught, hostile man slipped into St. Peter’s Cathedral in Rome with a hammer and began to smash Michelangelo’s beautiful sculpture ‘The Pieta’. Two cherished works of art were severely damaged.
But what did officials do? Did they throw out the damaged works and forget about them? Absolutely not! Using the best experts, who worked with the utmost care and precision, they made superhuman efforts to restore the treasures. 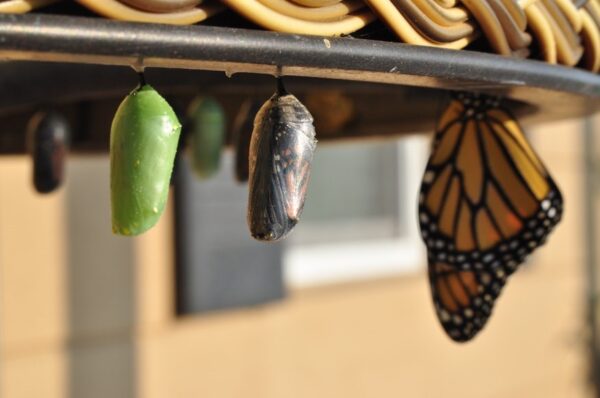 By His sovereign grace, God can also transform our drab, tired lives. He repairs bad attitudes, re-focuses our intent and adds lustre and colour to refresh our outlook and actions. And when God’s finished with us, our lack-lustre chrysalis is transformed into a magnificent butterfly.
In the early 1900s, an eminent English preacher, Rev. John Stuart Holden, used to relate a story about an old Scottish mansion close to where he had a small summer home.
The walls of one room of the mansion were filled with sketches made by distinguished artists. The practice of decorating the walls of this room with unique artwork began after a servant accidentally spilt a jug of soda water – the contents splashing onto a freshly decorated wall. That spill resulted in an ugly, unsightly stain.
At that time, a noted artist, Lord Landseer, was a guest in the house. A few days later, when the family were enjoying a walk on the nearby moors, he stayed behind. Wielding a piece of charcoal, with masterful strokes, the celebrated artist quickly turned that ugly spot into the outline of a beautiful waterfall, then augmented the picture with trees and native wildlife. It turned out to be one of his most successful depictions of the beauty of the Scottish Highlands.
Similarly, God has never relinquished his desire and commitment to create beauty from brokenness, and hope for despair, in the lives of those who seek renewal and a new life, through his grace.