With World War 1 now over, tourism was becoming the main industry in Yamba and entrepreneurs were moving in to tap into this lucrative market.

In the following January, he advertised a tariff of $3.50 per week with luggage delivered free of charge from Yamba wharf by Lou Rigg’s cart. The boarding house was run with the assistance of three of Harvey’s five daughters. It also provided limited tent accommodation during the Christmas holidays, but campers had to bring their own stretcher and bedding.

In May 1924, Harvey sold to Archie Cook, a saddler of Grafton and he took over the running of Sea View with his family. In July 1928, Cook obtained building approval from Harwood Shire Council to add a second storey to the guest house and increase the accommodation.

The official opening of the renamed “The Ritz” Guest House took place on 27 October 1928. Invitations to attend were issued by proprietors, Archie and Jessie (nee McDonald) Cook. They claimed it was the largest and most up-to-date guest house on the North Coast, with all modern conveniences, large lounge room 6.4m by 7.3m, large spacious balconies, overlooking the Park, surfing beach and sea. All bedrooms were furnished in oak with hot and cold water in each room (a well had been established at the rear of Convent Beach), separate bathrooms, electric lighting throughout and a dining room seating sixty-five. Thirteen bedrooms were added on the new top storey bringing the total to over twenty. The Cooks extended a thank you to the public for past support which had enabled them to build this first-class establishment. 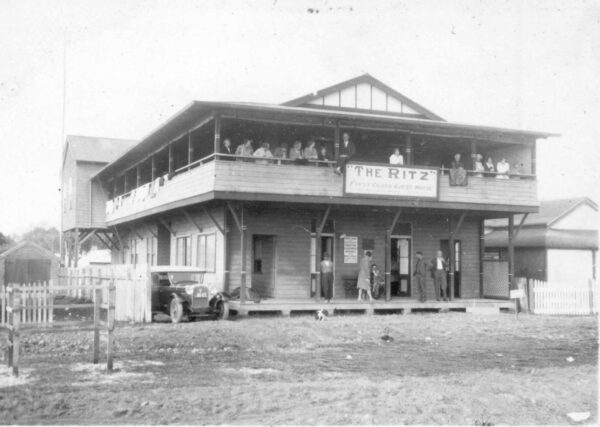 Archie constructed a tennis court across the street at the Clarence and Queen Street corner of Flinders Park in 1931 for his guests.

By November 1938, it was advertised that the renamed “The Hotel Ritz”, had been enlarged and modernised and could now accommodate one hundred guests. Every bedroom had hot and cold water laid on. The bathrooms had hot and cold showers as well as hot and cold plunge baths. Many of the bedrooms were balcony rooms from which magnificent views of the coastline could be obtained. The kitchen was all electric and the fish meals were worth coming to Yamba for alone. Fishing parties were arranged. Lunches were packed for those guests who wished to be away all day. The tariff of the Hotel Ritz was $5 and $6.30 weekly or $1 daily; children according to age.

On 17 October 1950, Maclean Fire Brigade tried unsuccessfully to contain a fire at the guest house, which was believed to have started in the kitchen. A guest, Lawrence Martin Casey, 23 of Brisbane, was on his honeymoon with his wife, Monica, and died at Lower Clarence Hospital from burns and injuries received when they jumped from their bedroom above the kitchen. Sadly, another guest from Victoria related how he had heard the honeymooners singing softly in their room only an hour or so before the building was in flames.

George Shankland built the “Yamba Motel”, the first motel in Yamba, in 1958 on the cleared site, which now contains part of The Cove unit development since 2001.