Skaters from as far as the Gold Coast and Coffs Harbour joined a huge crew of ‘super stoked’ locals at the opening of the upgraded Yamba Skate Park on Saturday, completing a vision 38 years in the making.

It was 1984 when Navrin Fox and Jake Pritchard wrote to council calling for a skate park to be built in Yamba, skatepark committee member Bobby McCaughey said.

After almost a quarter of a century of fundraising and determining a site, the original skatepark including a bowl, which opened in late 2006 was designed, built and funded by the community, Ms McCaughey said.

When the bowl was destroyed in April 2010, Ms McCaughey said the local skaters and skatepark committee were outraged and launched the “Bring back the bowl” campaign.

When the bowl was destroyed, Ms McCaughey said she signed a land use document designating the former site of the bowl was only to be used for another bowl.

Fast forward to 2020 and the Yamba Skate Working Crew, made up of council representatives, community members and skaters, was formed to reinvigorate the space and help create a design for the community.

After working with Convic skateparks on the design, the Yamba Skate Working Group applied for several grants before they were successful in securing $500,000 toward the upgrades, which Federal Member for Page Kevin Hogan announced from the Federal Government’s Local Roads and Community Infrastructure Program.

CVC awarded a $575,000 contract to Concrete Skateparks in October 2021 and construction of the park, which features a three-metre-deep clover shaped bowl, new obstacles, ramps, stairs, rails, and quarter pipes, was completed this month after delays due to rain.

On Saturday, July 30, following a Welcome To Country, CVC’s newly appointed General Manager Laura Black acknowledged the hard work of the Yamba Skate Working Group in pushing for the upgrades, the designer, Convic Skateparks, the builders Concrete Skateparks and council staff for their input to the fantastic community facility. 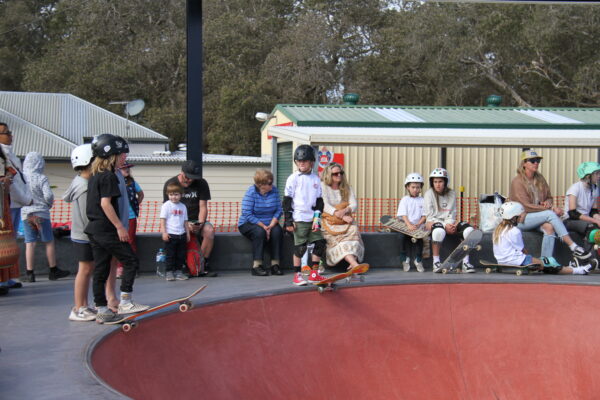 Bobby McIntosh, 8, of Angourie (right) and some other kids wait to drop-in to the bowl at the Yamba Skate Park open day. Image: Rodney Stevens

“This project plan commenced way back when the original bowl was recommended for demolition,” Cr Tiley said.

“This facility is undoubtedly world class.

“My hope and that of councillors is that this skate facility will become one of the foremost youth spaces in the region.

“It will be a strategic drawcard for Yamba and the wider Clarence Valley and of course for our many visitors on their holidays.

“Thank you and congratulations to all involved who helped make this happen.”

Dozens of skateboarders, from the very young to the more experienced, both male and female then hit the bowl, impressing the audience of more than 200 people, including many families who had travelled for more than an hour so their kids could sample the region’s newest skatepark.

The celebrations kicked on afternoon with skateboarding competitions, followed by skate videos and soundtracks at Yamba’s Last Rites Bar.