In the October 13 story, ‘The bowl is back; Yamba skatepark’s long and winding ramp’, the Independent covered the Yamba community’s long-time efforts to establish the skatepark.

However, the work of the ‘Yamba Skate Working Crew’, which was largely responsible for the work that resulted in Clarence Valley Council winning a $500,000 Australian Government Local Roads and Community Infrastructure Fund grant, was not included in the story.

The local skating community [is] celebrating the impending construction of the new Yamba skatepark, which will see it go from a local hangout to an exciting, world-class facility.

Made up of Clarence Valley Council representatives, community members and skaters, the current committee was established in 2020 to finalise the design of the skatepark.

Their aim was not only to reinvigorate the space, but to create a design generated from the heart and soul of the community.

Crew member Angela Lagos-Jay said the crew worked tirelessly to help deliver the project for Yamba and the Clarence Valley.

“I’m so proud of this team, for all the work we did engaging with the skaters, local businesses and council to get this project happening for our town,” Ms Lagos-Jay said.

“During our weekly meetings at Blanc Space we listened to what the community wants, and I can’t wait to celebrate with everyone when the skatepark is opened in mid-2021.”

Work to expand the existing skatepark will start in mid-November.

Clarence Valley Council manager for open spaces and facilities Peter Birch said the community had been instrumental in getting this project off the ground. 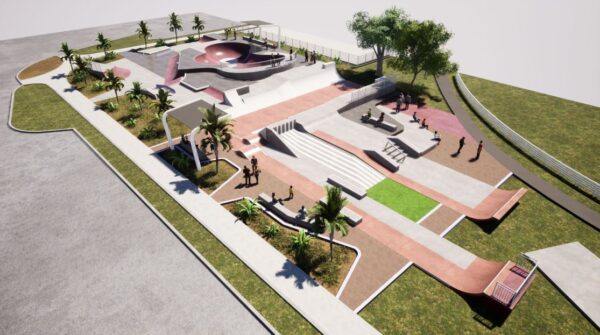 “This upgrade has been made possible by the passion and dedication of community members that brought the project to life,” Mr Birch said.

“The Yamba skatepark is to be a one-of-a-kind facility in the Northern Rivers, offering young people the opportunity to develop advanced skill levels in the skate bowl.

“The new park will be the envy of the region, a dynamic and youthful addition to the Yamba CBD.”

The skatepark was designed in consultation with the community and the young people who use it the most.

The centrepiece is a large clover bowl with a super-advanced 3m deep end. It will be the key attraction as it offers corners and flow lines that complement the existing pipes.