Communities along the Woolgoolga to Ballina Pacific Highway upgrade will enjoy a connection to country along the route where work from ten locally connected Aboriginal artists will feature in an Aboriginal art trail.

As part of the Woolgoolga to Ballina (W2B) Pacific Highway upgrade project, Transport for NSW has engaged Balarinji to work with key Aboriginal stakeholders including local Aboriginal Elders, Aboriginal knowledge holders and Aboriginal artists to develop concept artwork for the art trail.

Aboriginal artists with a connection to the local Gumbaynggirr, Yaegl and Bundjalung communities have now been selected to create artwork depicting stories from their narratives.

These artists will design work that will appear on nine bridge safety screens and four rest areas located along the 155-kilometre route once it opens to traffic in 2020.

More information on the artists recently chosen as part of the co-design process and an example of their artwork is provided on the following pages. 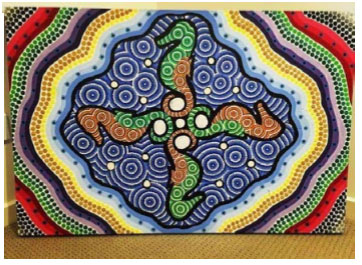 Daniel Dootson
Daniel is a Gumbayggirr man from Corindi Beach. Daniel has a very strong connection to land and culture and is of the family who founded the Garby Elders.
Daniel’s artwork is about connecting with culture and Country, finding his artwork to also be therapeutic and relaxing in the practice. 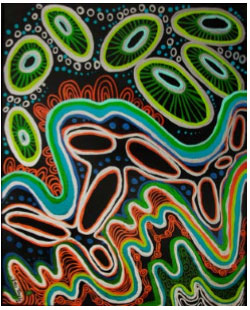 Debbie Taylor
Deborah, or Debbie, is a local to the Clarence Valley, born in Grafton. Debbie is of Gumbaynggirr and Bundjalung descent through her father and mother.
Being a part of the northern end of the Gumbaynggirr Nation, Debbie has affiliations to the Country around this land.
Debbie participates in community events and has been involved in committees with an artistic and cultural theme.

Reece Flanders
Reece is a descendant of Gumbaynggirr and Bundjalung people with strong ties to the Yaegl people also.
While Reece’s great grandfather was born on Ulgundahi Island on Yaegl country, Reece grew up and lives in Coffs Harbour.
Learning culture from Elders, Reece draws inspiration for his art from stories, Country and nature. 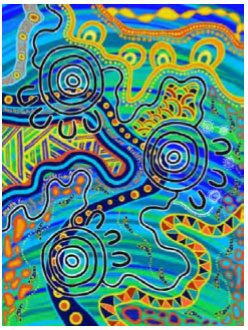 Aneika Kapeen
Aneika is a proud Yaegl and Bundjalung woman. She was born and raised in Yaegl Country.
She is passionate about her culture and Country and expresses this through her art.
Aneika is only new to art but has a strong practice of combining contemporary and traditional Aboriginal art styles.

Frances Belle Parker
Frances is a proud Yaegl woman, painter and installation artist from Maclean, NSW. She is deeply inspired by her Mother’s Country (Yaegl Country) and the Island in the Clarence River that her mother grew up on, Ulgundahi Island. 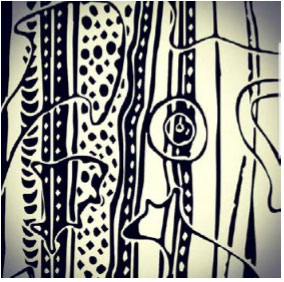 The late Jessica Birk
The late Jessica Birk was a Yaegl woman who was raised, lived and worked on Sydney’s Northern Beaches. She graduated from the College of Fine Arts, UNSW and her work was predominantly influenced by her coastal home and strong Yaegl cultural links.
Jess worked closely with her cousin fellow Yaegl artist Frances Belle Parker, with whom she formed Dyinda Designs. It is Frances, with the support of Jessica’s mother Lois, who will continue her legacy through Jess’s unseen artworks that respond to Yaegl Country.

Gilbert Laurie
Gilbert was born in Lismore and belongs to the Yaegl and Widjibal tribes of the Bundjalung nation.
He grew up with his grandparents around Yamba and Lismore and later moved to the base of Nimbin Rocks. In the mid-1980s,
Gilbert and Oral Roberts set up an artists’ studio at The Chocolate Factory in Lismore where they worked for many years.

Marcus Ferguson
Marcus is a local Nyangbul Goorie from Ballina and Cabbage Tree Island and has been painting for the past 25 years. Marcus enjoys incorporating the many different cultural birds and animal species that are associated with the cultural landscape of the lower Richmond River. 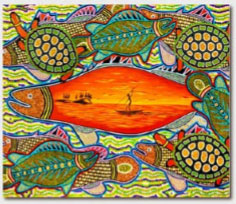 Oral Roberts
Oral was born on the Cubawee Mission near Lismore in 1960, his father (Widjabal) and mother Minanjali/Bundjalung).
His grandparents were (Widjabel) and (Wahrlabal), making Oral a third generation Widjabal (Lismore) clan man.
Oral’s works reflect his close connection to the Bundjalung land and culture. His painting expresses his strong connection to the spirit and the bush, where many of the bird species and animals he paints are native.

Sheldon Harrington
Sheldon ‘Sj’ Harrington, is a young local Widjabul Artist from the Bundjalung Nation on the Far North Coast of NSW.
The importance of his connection to Bundjalung Country, his family, his community and way of being has been taught to him by his grandparents, parents, uncles and aunties, and the wider family in many forms of oral and visual language.
These teachings now permeate his artworks and visual designs and pay respect and celebrate the survival and continence of our knowledge and dreaming.