Tributes have begun to flow after the passing of Clarence Valley’s oldest resident Winifred Matilda “Win” Jefferies on Friday, 11 September, at the age of 108.

Win celebrated her 108th birthday on 24 August 2020 at her home in Dougherty Villa, Grafton, and to celebrate Win’s milestone we re-named the paper the Clarence Valley ‘WINdependent’, much to Wins delight.

Anyone who knew Win, knew that she had a very soft spot for International tennis player Roger Federer. She knew each of his children’s names and his poster adorned the wall in her room.

In an interview just prior to this year’s birthday, we asked Win what she liked most about Roger and if she got the opportunity, what she would say to him.

“He’s such a nice natured man and you never heard him back answer anyone or see him throw his racket down, like some of the others did,” Win said.

“He always had a good sense of humour.

“I would tell him that he was admired for being a good tennis player and for being such a good sport,” she said.

In our special WINdependent edition, we mentioned that at the time of going to print, we had just received word that a special ‘late’ birthday surprise was on its way for Win.

Over the last few years in the lead up to Wins birthday, Dougherty Villa Leisure and Lifestyle team leader Ros Houlahan and CV Independent Photo/Journalist Lynne Mowbray have tried their best to contact Roger Federer through emails, social media and even contacting Tennis Australia during the Australian Open this year, in an attempt to notify Roger Federer of what could possibly be his oldest and most adoring fan; but to no avail. 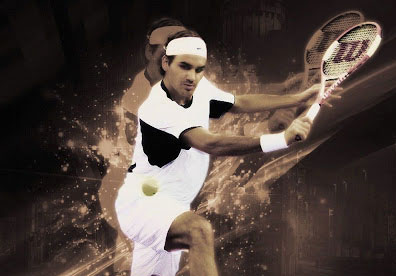 After exhausting all avenues in trying to contact the tennis great, a call was made to Federal Member for Page Kevin Hogan, who got the ball rolling.

Kevin Hogan said that he had known Win for many years.

“I remember about five or six years ago she was telling me what a great fan of Roger Federer’s she was,” Mr Hogan said.

“Lynne Mowbray was talking to me and said let’s try and organise something for Win from Roger Federer for her 108th birthday.

“So, I made an approach to Tennis Australia and requested what we would like, and they very kindly got in touch with Roger Federer’s team. So we were able to get Win a lovely Roger Federer signed cap and he’s got a little personal message on it which is great and I know she will be thrilled with it,” he said.

Two days before Win passed away, she received her special ‘late’ birthday surprise from her idol, Roger Federer.

On Wednesday morning last week, Kevin Hogan presented the signed cap to Wins granddaughter Glenda Rogan, outside Dougherty Villa. Ros Houlahan and Lynne Mowbray were also present for the official handover of the cap to Win, who unfortunately was unwell and unable to come outside for a photo.

Glenda and Ros delivered the cap to Win who was resting in her room.

Ros Houlahan who has worked at Dougherty Villa for 11 years said that Win has always loved Roger Federer.

“She loves him because he’s a gentleman and he’s never thrown his racquet down and he’s a good sport, she told me,” Ros said.

“Each year we always try and do something special for Win for her birthday and when we’ve asked her over the year’s (if we could try and contact Roger) she said she didn’t want a fuss; and so we talked to the family and they said, ‘just go for it’.

“I’ve been working with Lynne over the years and (during that time) she has loved coming in and interviewing Win. Last year I invited her to come in for breakfast with Win on her birthday and Lynne said it was a highlight of her life.

“So, over the years we’ve tried contacting Roger through the media and this year it’s finally happened!

“Win’s always been such a lovely person and she’s finally got her signed cap from her idol Roger Federer.

“Win was very happy about it and Lynne and I are ecstatic – we finally got something! 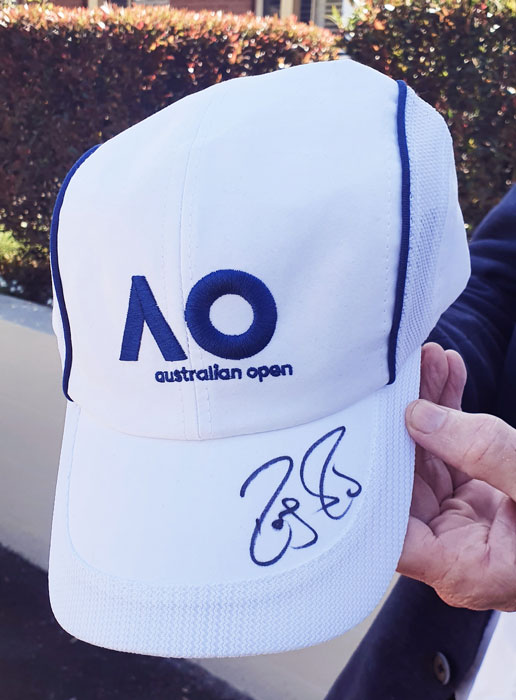 Glenda said that her grandmother was really excited and over the moon to receive the signed cap, because she idolised Roger.

“She was smiling and really happy as we placed it on her head,” Glenda said.

“We really appreciate what Roger did. He’s got a great heart and I think that granny has picked the right mentor – she loves him so much. He’s an amazing man.

“To actually get a cap signed by him, was awesome.

“It was a dream come true,” she said.

The Independent would like to thank the community for coming on board and posting their messages of congratulations to Win on her 108th birthday last month, on our Facebook page. She received a printed copy of all your wishes which she absolutely loved.

We would also like to thank the community for their messages of sympathy and for their condolences, on Wins passing.

Our heartfelt sympathy goes out to her family at this sad time.

A Message from Lynne Mowbray ♥

Over the last several years I have had the privilege of covering Wins birthday, and our annual catchups have been something that I have looked forward to fondly.

As each year passed, Win’s alertness and vitality for life, have remained the same.

Reflecting back over those years, a particular stand-out moment came last year when I was invited to join with Win for breakfast on her birthday, along with four of her fellow centenarian friends.

Win, who at the age of 107 still loved shopping for clothes, told me that she used to shop at Clovelly’s in Maclean, but she now had to shop in Grafton and had purchased the outfit that she was wearing, from Birdscage.

As I sat with this group of ladies, I was informed that their table was called “the naughty nannas”.

It was like stepping back in time to lunchtime in the school playground, with a group of girls all laughing and chatting together, sharing news and telling tales and funny stories about each other.

Over breakfast that morning, Win shared with me some of her little secrets to her longevity –

“I’m a teetotaller and have never smoked,” Win said.

“I exercise, so I don’t have tuckshop arms and try to do a bit of walking.

“Breakfast is the most important meal of the day,” she said, as she happily shared what she has for breakfast each morning.

“Breakfast starts with (a small compote of) fruit.

“I have coffee with milk – and a shake of salt,” Win said, as she shook the salt into her coffee.

“I have salt in my rolled oats (porridge) too,” she said.

Win finished off breakfast with a piece of toast, which she buttered.

“I spread Vegemite on my toast then top it with smashed avocado,” she said.

“Now that everyone knows that, you won’t be able to buy any Vegemite or avocados in Grafton tomorrow,” she said laughing.

I believe that Win was Dougherty Villa’s matriarch; a gem of a woman who was loved and respected by all who knew her.

Her dry sense of humour, elegance, humbleness, and smile will be something that will remain with me for the rest of my days.

My life has been blessed for having known her.