Scarlett Grebert, Tamara Grebert and Anastasia Grebert from Emerald Beach proudly display the lanterns they made at Riverlight Ulmarra. Image: Emma Pritchard
From the Newsroom

Despite moderate flooding preventing the Clarence River from being illuminated by floating lanterns, community enthusiasm for the inaugural Riverlight Ulmarra Festival shone brightly on the weekend.

More than 600 people gathered in the historic village to celebrate the event on May 14, with many expressing their wishes to see it become an annual attraction.

Sponsored by Clarence Valley Council (CVC) who facilitated grants through the Regional Tourism Bushfire Fund to enable the festival to go ahead, Riverlight Ulmarra was created as a community led event to boost visitation to the area following the completion of the Woolgoolga to Ballina Pacific Highway upgrade and subsequent bypassing of the riverside township.

Two lanterns in particular stood out during the parade.

The first was a boat lantern which had been constructed during a lantern making workshop at Brushgrove Hall, while the second one was a giant fish lantern that had been made by female inmates at the Clarence Correctional Centre (CCC). 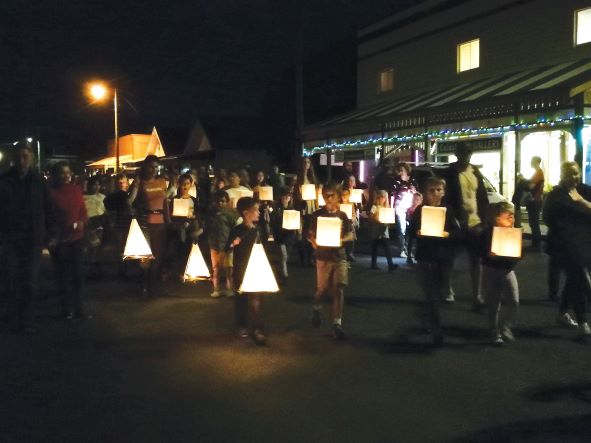 After NSW Police and NSW SES closed access to the Clarence River due to dangerous conditions caused by ongoing flooding, Mr Nicholas said the lantern parade became the highlight of the festival.

“Unfortunately, we couldn’t light up the river, but anyone who didn’t have a lantern was given one and invited to take part in the parade, and that created a moment in the festival which was totally magical,” he said.

“There were at least 200 lanterns in the parade and well over 600 people at the festival, amazing.

“The Ulmarra Hotel was booked out, and it brought visitors into the region which is what we wanted.”

Following the parade, the lanterns were proudly displayed in Bailey Park.

As he admired the illuminated setting, Mr Relf said Riverlight Ulmarra had exceeded his expectations and it had been a pleasure to work with the local community in the led up to the event.

“This was one of the largest community-based lantern parades for an inaugural event I’ve ever worked on,” he said.

“The response has been fantastic.”

Describing himself as thrilled and relieved following the overall success of the event and the positive feedback from festivalgoers, Mr Nicholas said Riverlight Ulmarra will almost certainly return in 2023.