Lynne Till – Boxer Kroehnert’s youngest daughter with the book that has been written by her and her siblings, on the life story of their father, Boxer Kroehnert. Image: Dale Till
From the Newsroom Local News

The family of the late Cecil Frederick ‘Boxer’ Kroehnert, with the assistance of Baillieu and Sarah Myer (of the Myer department store dynasty and owners of Yulgilbar Station), have just released a book on the life of the well-known master craftsman in the timber industry. 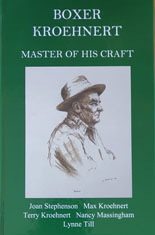 The book titled, ‘Boxer Kroehnert – Master of his Craft’ contains over 100 photographs, newspaper clippings and stories, portraying his life.

He grew up in Sydney and by 1937 he was achieving success as an axeman, following an outstanding win at the Sydney Royal Easter Show.

During the depression he obtained work, timber cutting and bridge building in the Border Ranges, in Northern NSW.

During the 1950s he moved to Gordonbrook and Yulgilbar Stations, where he made his indelible mark, for the quality of his workmanship.

Over the years he constructed numerous post and rail fences, gates, stables indoor arenas, gazebos, stock yards etc for the Myer family on both of their properties; at Yulgilbar Station and Elgee Park (in Victoria).

‘Boxer’ was more than a valued worker, and he and his family became well-respected and cherished friends of the Myer family; a relationship that would span more than 30 years.

This special rapport is evident in the words of Baillieu ‘Bails’ Myers which are written in the foreword of the book.

Boxer Kroehnert’s youngest daughter Lynne Till, who was one of the co-writers of the book, said that her family were persuaded to tell their fathers story.

“Dad’s been gone now for 18-years, but Mr and Mrs Myers felt that his story was a worthwhile story and they encouraged the remaining five members of our family, to write his life story,” Mrs Till said.

“Unfortunately, my brothers Neville and Les have passed away and we were not able to include their information.

“Dad was a great storyteller and fortunately my oldest sister had recorded dad, when he was in his 80s, giving a re-count of his life. So, part of the book is actually dad’s words.

“Mr Myer thought so much of dad that he was featured in last years ‘Men of Yulgilbar’ exhibition at Grafton Regional Gallery, which was curated by Jennifer Baldwin and Lianne Hart, of the Yulgilbar Archives. These two women also edited the book for us.

“We’ve had very positive feedback so far from people who have purchased the book, which is very encouraging,” she said.

There are a limited number of copies available of ‘Boxer Kroehnert – Master of his Craft’ – so get in quick.  You can purchase a copy from The Book Warehouse in Prince Street, Grafton as well as Schaeffer House, 190 Fitzroy Street, Grafton.