It’s been eleven years since Dunsborough based photographer Tim Campbell first picked up a camera. Since then, he has carved out a successful career as a freelancer, and now manages all social media channels for the Margaret River region. Although he says that the journey to making it work as a freelancer has not been smooth, the thing that has remained constant for him is his connection to the ocean and the sweeping coastline of Western Australia.

After spending some time working on a search and rescue deployment and several years based in the Mid-West, he “couldn’t help but feel the call of the south”. Now based out of his hometown, Tim says he enjoys the freedom of being able to explore what the South West has to offer, capturing images that evoke a lust for adventure out at sea.

“To me, the South West feels like living on the edge of the world. This raw coastline is in a constant state of change and has provided endless opportunities to create the images that inspired me to begin life as photographer in the first place.”

Tim was kind enough to share some of his favourites from the South West coast. 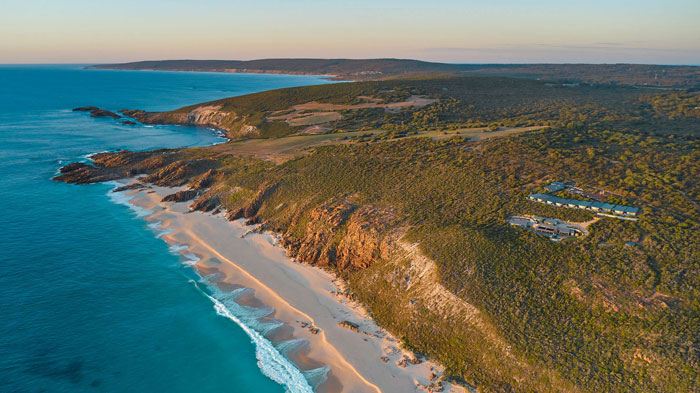 This coastline has stories. They say the granite outcrops of the South West are some 600 million years old and when you explore around the weathered cliff faces and smooth boulders you can really get an appreciation for how ancient this place is. My favourite time of year to shoot the west side is undoubtedly the Autumn afternoons when the wind swings offshore, as the red rocks are lit up by a setting sun and sandwiched between a smooth blue ocean and rolling green hills. The colour contrast it creates is a beautiful palette to capture. 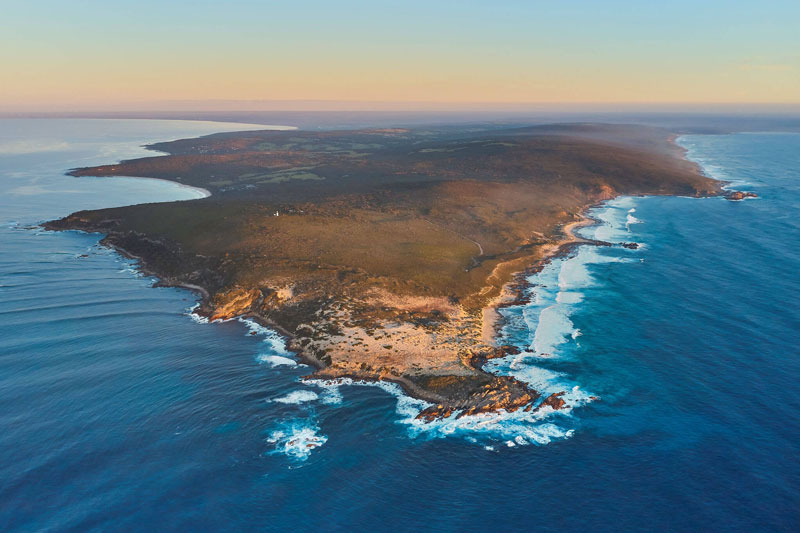 As cliché as this may sound, Cape Naturaliste has an energy that draws you in. After finishing year 12, I left the Mid-West in search of better waves and found myself living in the cosy seaside town of Dunsborough. The decision to come here was undoubtedly a result of watching home-grown surf movies from the late 90’s, and with stories of world class surf unloading on the coastline down here, I became set on creating a life down south.

That said, the reason I stayed here is far beyond my original lust for surf. The feeling of freedom we pursue on an overseas backpacking holiday or adventure trip seems to be a constant here on the Cape. Aside from the raw aesthetic of the landscape, we have an incredibly dynamic weather pattern, an abundance of marine life, a warm and open-minded community and plenty of hidden secrets dotted up and down the coast. I honestly have never been bored here a day in my life, and for a photographer, that is pure bliss. 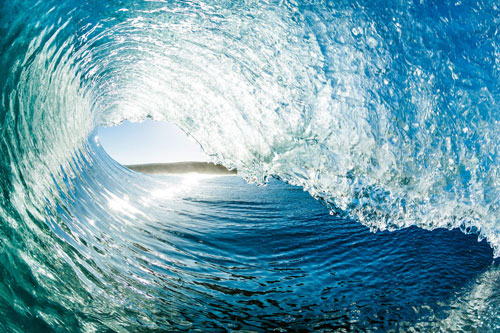 I haven’t always been a photographer, but the ocean has been a part of my life for as long as I can remember. I was 23 when I decided to dig my teeth into the craft full-time. It wasn’t too long after that, when I bought my first water housing, that I knew I’d never give it up. Growing up as a body-boarder meant I was constantly dreaming about getting tubed all day long and when I realised that I could freeze these fleeting moments in time, I was absolutely beside myself! This was the perfect balance of sport and creativity I had always been looking for.

To date this is my favourite image I have shot inside a wave anywhere. There isn’t a drop out of place, the wave is flaring open perfectly, and the sun is shimmering delicately through the lip. The best part of all, it’s only a short drive down the road from where I live. 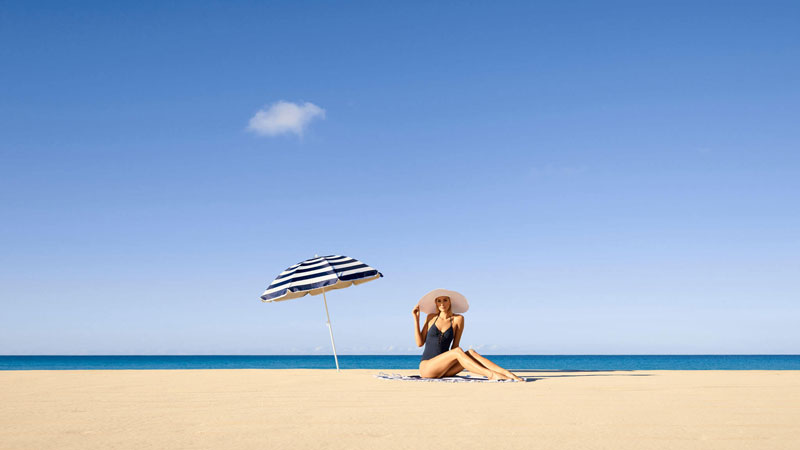 Nearly every time I walk out on to the sand here, I have to pinch myself as a reminder that I am indeed not in the Bahamas, but 10 minutes down the road from home! Eagle Bay Beach is absolute luxury. This scene was from a concept shoot for the camera manufacturer Phase One. We were wanting to highlight the rich colour depth of the sensor and crisp optics in the lenses so naturally this beach came straight to mind in the concept stage. There is hardly any post processing on this shot, it is just a purely beautiful place to hang out in the sun. 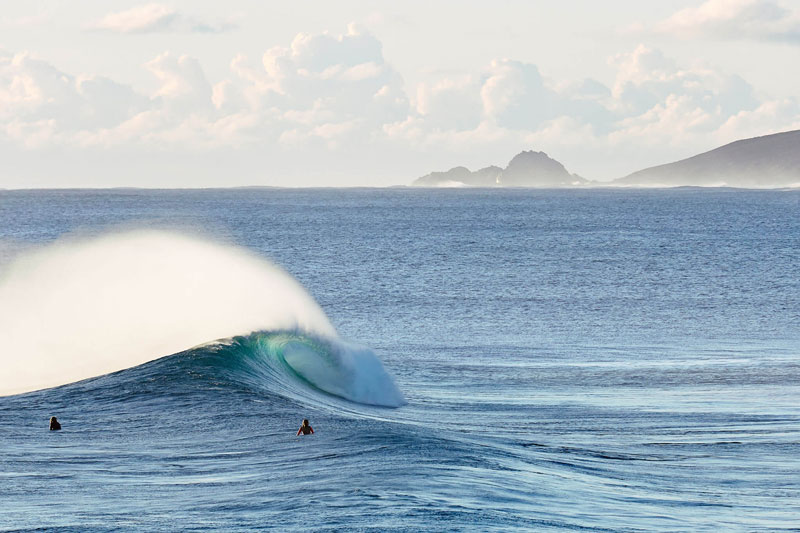 A lot of folks I know that make the trip down from the city say that this is the view they wait for all year. This is the scene that takes their breath away each time and allows them to actually begin their holiday. I 100% agree with them! Driving over that last hill as Mainbreak reveals itself against the ever-dominant Sugarloaf Rock, with surfers tearing up the Indian Ocean groundswells in the foreground and a classic West Aussie afternoon sun piercing through the sea mist just doesn’t get old. 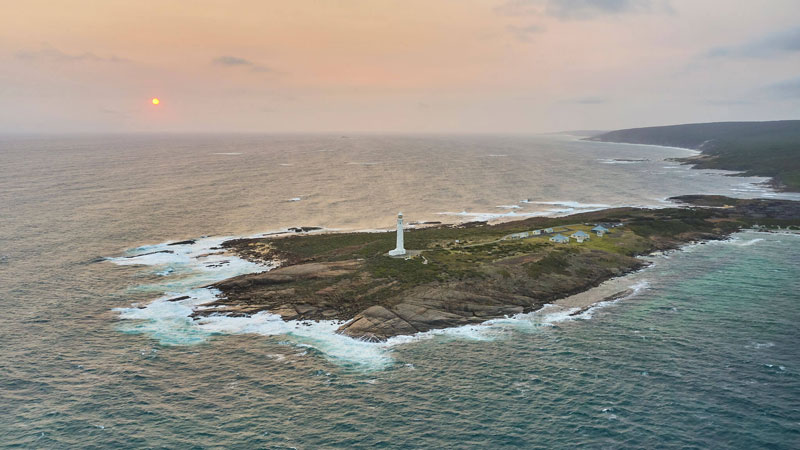 How could I not include a photo of Cape Leeuwin in a collection of images featuring the South West Australian coastline!? This is as far as you can go in this direction (excluding Heard Island). It’s where the road ends, you get out of your car and climb all the way to the top of the tallest lighthouse on the mainland, you peer out over the Southern Ocean and that’s it, next stop Antarctica!

However, labelling this rocky peninsula that signifies where two oceans meet (the Indian and Southern) as being the ‘end of the road’ is really not an appropriate tag line in my books. In the words of Paul Sofilas, the caretaker who has watched over the lighthouse for the last 20 years, “this place is the beginning of a journey”. And you can bet that with some of the country’s most ferocious storms making landfall here, incredibly well documented maritime history on display, and a diverse marine ecosystem with one of the best whale watching spots in the country, the action really does begin when you pull up in the carpark. 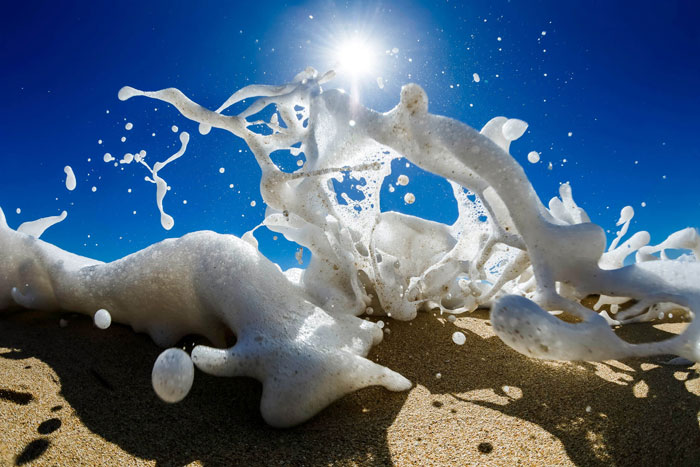 I think what hypnotises a lot of people when they view photographs of waves and water doing weird things is the fact that you enable them to see shapes in a medium that is essentially shapeless. Water is chaos, but at the same time it is the ultimate state of harmony.

A few summers ago, as I was walking along the sand back to the car after a long session shooting surf, I spied this little lip of sand on the shoreline kicking the white water up in all sorts of weird ways. Instantly this image came to mind. Executing the concept, however, proved to be quite difficult. As I’m sure you can imagine, it meant I had to get completely covered in sandy foam each time a wave hit! I think I must’ve run back and forth into the water about 25 times to wash my lens port down before I finally got this frame; a pyramid of white water under the midday sun. I called the image “High Noon”. 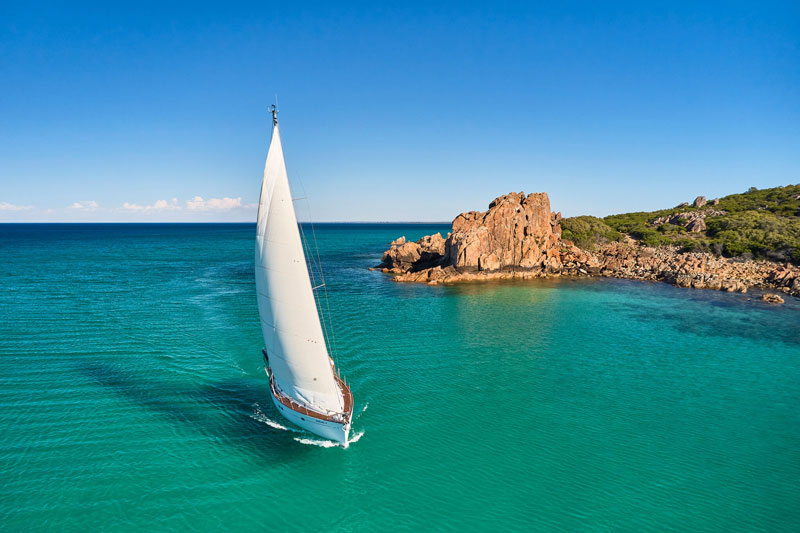 Geographe Bay is known worldwide throughout the sailing community for having some of the best flatwater racing conditions on offer. We were just cruising up and down the coastline this day, but to be able to go from sailing fast pace out in the deeper waters straight into protected anchorages like Castle Bay is special. Iconic landmarks like Castle Rock really jump out of the landscape there.

I have an addiction to shooting sailing. Pretty much every other job I’ve had apart from freelance photography has been on the water. The association sailboats have with adventure, freedom and escapism are in direct alignment with what my core values are as an artist. 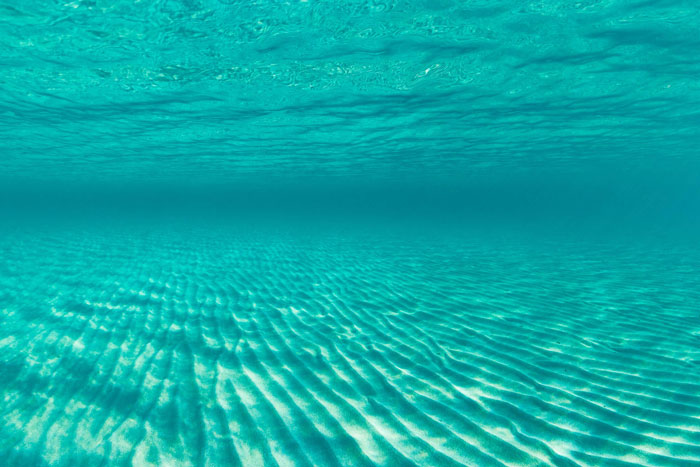 The sand banks that stretch from Dunsborough to Bunker Bay provide some of the clearest underwater shooting environments you’ll find in the South West. It’s kind of like having your own natural studio waiting for you to shoot whatever subject you can drop in there.

I think my favourite scene is just the empty underwater space though, this kind of image makes you want dive in and swim off into the distance. It’s such an inviting place and I spend a lot of time here throughout the summer. 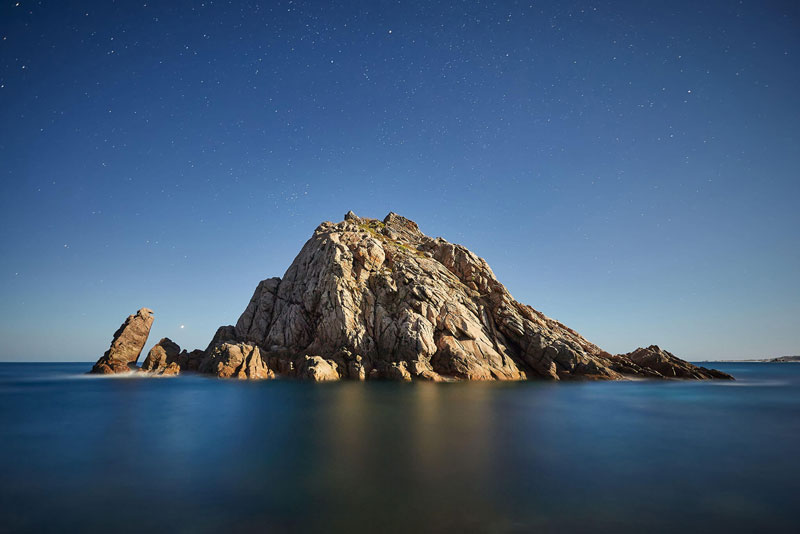 It’s arguably the most photographed rock in Western Australia, and for good reason; you just can’t take a bad photo here! With so many lenses pointed at this iconic chunk of granite, I really wanted to create in image that hadn’t been seen before and being the minimalist that I am, I had this shot burning in my mind.

So, on the night after the full moon, when the balance of moonlight and ambient sunlight was just right, I climbed down to the rock yard and found this composition. The result was exactly what I had pictured; a photo that lets the mighty rock stand front and centre as the main subject under a blanket of southern hemisphere stars, highlighted by the full moon rising over the Leeuwin Naturaliste Ridge. You can see I’m a ‘less is more’ kinda photographer. 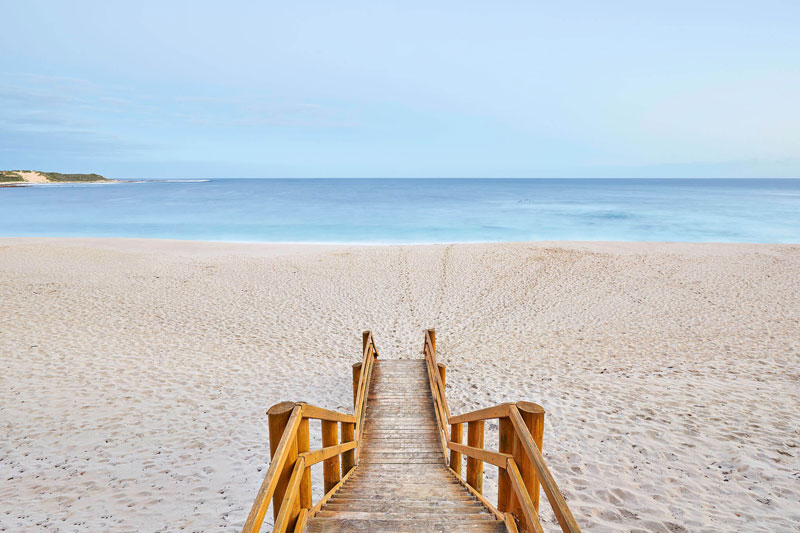 Not too many man-made structures will appear in my art catalogue, but these steps leading out on to Injidup Beach encapsulate exactly how I like to start my day; setting foot on the sand before sun up. I’ve created a huge amount of work over the years at this location and will continue to do so as the constant state of change you see here throughout the seasons mean there’s something new to shoot almost every time you come back. It’s a very special place to me. 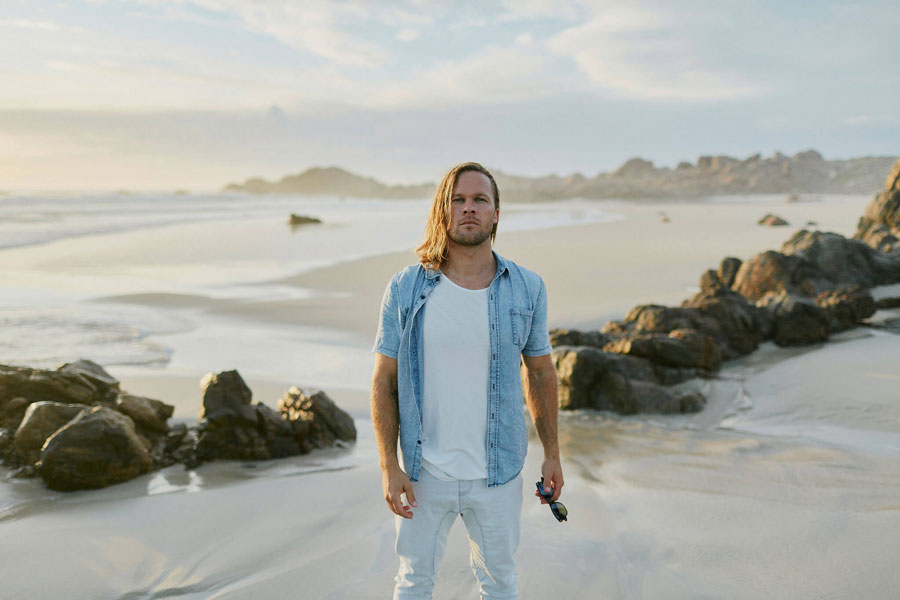