400 tonne cranes were able to access the site of a freight train derailment at Nana Glen last week due to clear weather conditions to help clear the stricken wagons and one of the Pacific National locomotives which fell onto its side following the incident. Image: Contributed/Nana Glen Rural Fire Brigade.
From the Newsroom Local News

Freight and passenger services have resumed operations on the North Coast rail line between Brisbane and Sydney following a major train derailment at Nana Glen on February 25, which forced the closure of the primary travel route for several days.

Pacific National locomotives NR43, AN3 and NR39 were hauling a Melbourne bound, 1500m long freight train when the derailment occurred amidst torrid wet weather conditions shortly after 2am, resulting in a mangled mess of wagons, ruined freight and an 11,000 litre, diesel fuel spillage.

A spokesperson for the Environmental Protection Agency (EPA) later confirmed tests carried out on water sources in the area came back clear of oil and grease and initial concerns the freight train was carrying hazardous materials which may have been exposed in the derailment were allayed.

Pacific National sent two locomotives from Acacia Ridge to Nana Glen on March 3 to recover the remaining wagons which had stayed on the rails following the derailment, while clear skies and drier conditions enabled two 400 tonne cranes to access the site and rerail the stricken locomotives and lift NR39 which fell onto its side following the incident.

Almost 1000m of rail line, 1500 tonnes of ballast sourced from local quarries and 600 concrete sleepers from Grafton were transported to the site late last week as work commenced on rebuilding the damaged section of track.

ARTC said in a statement there were approximately 100 workers on site.

The three locomotives involved in the derailment were inspected on site and moved to the loop line at Nana Glen before they were transported to Newcastle.

Pacific National also sent two locomotives to descale the track from Acacia Ridge to Glenreagh and back via the loop lines to ensure the track circuits were working following the forced closure of the line.

Work to repair the damage at Nana Glen was completed over the weekend and a temporary 20km speed limit remained in place as the first trains passed over the newly rebuilt section of track which stretched for 300m.

Investigations into the cause of the derailment are ongoing. 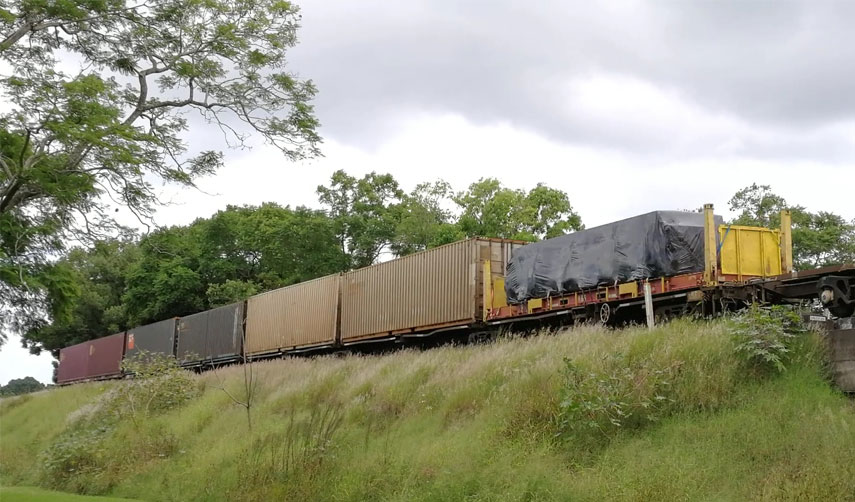