Although tiger sharks have a reputation as swift and fierce predators, new research by The University of Western Australia, Australian Institute of Marine Science and Murdoch University has revealed that they actually prefer life in the slow lane.

The study, published today in Royal Society Open Science, found that rather than rushing about to locate prey, these sharks spend most of the time swimming slowly in a yo-yo fashion between the surface and the bottom.

This allowed every tailbeat of the shark to be monitored, in the same way that a FitBit records human footsteps.

The researchers then calculated the energetic costs as tiger sharks searched for prey on the reef.
Dr Andrzejaczek said the tags provided a close-up view of how exactly the tiger sharks moved through their three-dimensional environment.

“We could see the environment they swam through, and more importantly, begin to understand why they are swimming the way they do, and why they may be choosing particular habitats,” Dr Andrzejaczek said.

Dr Mark Meekan, from the Australian Institute of Marine Science, said the up-and-down movements used by tiger sharks reduced the energetic costs of swimming relative to swimming the same distance at a level depth.

“Even for large predators such as tiger sharks, there is no such thing as an easy meal or any certainty when that meal may arrive, so it’s very important for these animals to conserve energy while they search,” Dr Meekan said. 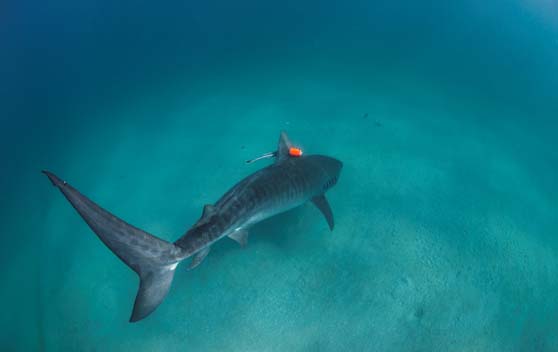 Professor Chari Pattiaratchi from UWA’s Oceans Institute said the angles of movement also changed as sharks moved between inshore and offshore habitats, with shallow inshore habitats, such as the sandflats of Ningaloo, being the most cost-efficient place for tiger sharks to move.

“As the cameras on the tags also showed a lot of prey in these shallow sandflats, it looks like this habitat is a really important place for the sharks to both hunt and conserve energy,” Professor Pattiaratchi said.

“These tags are able to capture a range of factors including depth of water, acceleration of movement and temperature in a new way and we hope to expand this research to understand the movements and behaviours of other species globally in different habitats.”

Dr Adrian Gleiss of Murdoch University’s Harry Butler Institute said large tiger sharks were referred to as ‘keystone predators’ in reef environments, because their presence had important impacts on the behaviour of many other animals such as dugongs, turtles, and even seabirds on the reef.

“The presence of large tiger sharks ultimately affects energy flows and nutrient cycling,” Dr Gleiss said.
“So it is essential that we identify the critical habitats for these sharks and protect them if we want the reefs and seagrass habitats of our coral reefs remain resilient in the future.”

The project was conducted by scientists from the Australian Institute of Marine Science, Murdoch University, The University of Western Australia and Stanford University in California.