Barbara Winters captured these images, most likely the bulk carrier ship, Queen Busan, on Saturday morning at 6.10/11am – the vessel was built in 2010 and is currently sailing under the flag of Panama.
From the Newsroom

As the sun crept above the horizon on Saturday morning, October 30, Barbara Winters was capturing the moment when a “thing” appeared on the horizon, a thing that seemed surreal.

At first Ms Winters “thought it was a platform on the horizon, like an oil rig”, so she zoomed in and took “three more photos, then the ‘thing’ disappeared”.

“We were playing in the rock pools under the cliff, watching the sunrise, and I saw a shape on horizon just below the sun,” she said.

“I came home to check the photos and saw that it had actually been changing shape.

“It seemed to be a cloud that had a perfectly straight top, like a table.

“Then the cloud started to droop into the ocean.”

Ms Winters posted the images on the Friends of Brooms Head Facebook page, asking, “Has anyone ever seen anything like this? What’s a cloud like that called?”

About two hours later, someone posted a link to a BBC story, ‘‘Hovering ship’ photographed off Cornish coast by walker’, and, following a range of commentary, some of it humourous, a person wrote: “It’s a Fata Morgana! A phenom where the mirage of solid objects in their exact appearance—shape and structure—are transported long distances, usually over water to distant places. 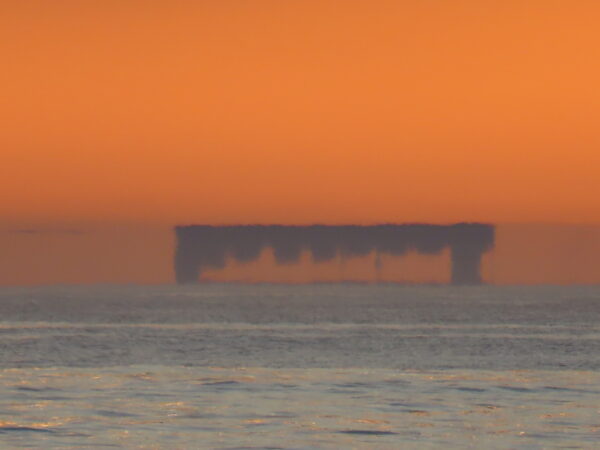 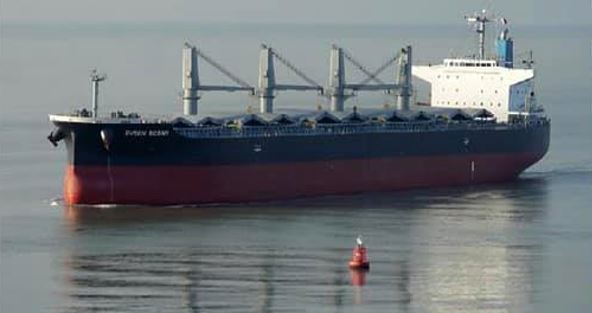 “These mirages appear exactly as this one did on the horizon or in the air; not many get to see a Fata Morgana in their lifetime.”

“At first it seemed to be an oil rig,” Ms Winters said, “but others have since told me it’s an actual Fata Morgana, a mirage image of a ship that was off the coast at that time.

“When I could see it clearly, I took a few shots; and then it disappeared after a few minutes.

“I think I’ve tracked down the ship, as well; someone just alerted me to this marine app [marinetraffic.com] that you can use to track vessels.”

As it happens, the ship was most likely the bulk carrier, Queen Busan (as shown at vesselfinder.com), which headed north out of Newcastle Harbour at 8.57pm on October 29 – on Monday morning the ship was located east of Gympie.

The Australian Government’s Bureau of Meteorology has published a story that explains the phenomenon, ‘Mirrors in the sky: Demystifying the legend of the Flying Dutchman’, which, at the end of the story, asks “Did a Fata Morgana sink the Titanic?”.

However, after some consideration of the concept – “The weather records and eyewitness reports have led scientists to suggest that these atmospheric distortions may have been present on that fateful night.” – there is only speculation.

“But this particular mystery may never be solved,” the author wrote.