It was a moment Lawrence Museum life member Eulie Allen had looked forward to for some months. 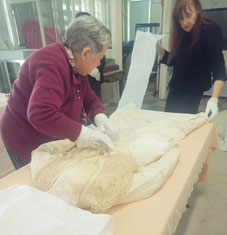 The 156 year old wedding gown had been on display at Lawrence Museum for some years, and needed to be stored to preserve it. The gown was handmade, possibly with raw silk and Norfolk lace. All fastenings are either press stud or hook and eye.

The wedding gown was worn by Elizabeth Dennis when she married Alexander McPhee in 1864. Elizabeth Dennis, was the daughter of Mr & Mrs John Dennis of Ulmarra. She was born on the Parramatta River and came to the Clarence around the time of her marriage to Alexander McPhee. The couple made their home at Lower Southgate, and had thirteen children.

Alexander McPhee died in November 1905 and Elizabeth died on 15th January 1920, at the age of 74. She is buried in the Lawrence Cemetery. At the time of her death, nine of Elizabeth’s children were still alive, and she had 34 grandchildren and 3 great-grandchildren.

The gown was cared for by her son, Athol McPhee, until his death in January 2001, and was gifted to the museum by Athol’s son, Stuart, and his daughter-in-law, Margaret.

Packing and storing old textiles is a specialised process and Lawrence Museum volunteers were fortunate to have Museum Consultant Joan Kelly on hand to demonstrate the correct process. Eulie was delighted with the final result, “Now the wedding gown will be preserved for many more years to come.”

While the Lawrence Museum is closed to the public at the moment, the volunteers are working hard creating new displays for the reopening. 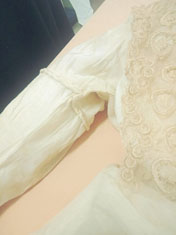 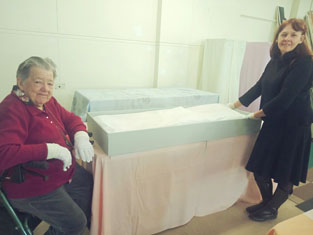 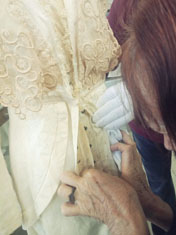