The Regional State of the Environment Report Summary 2020, which was tabled at yesterday’s November 23 Clarence Valley Council (CVC) meeting, reveals that CVC is near or at the back of the pack when it comes to its renewable energy and emission reduction targets.

The document, which was funded by 12 north coast councils (and Rous County Council), from Port Macquarie to the Queensland border, “aims to provide data on environmental conditions at both a regional and local level from 2016 to 2020”.

The report “is provided for the outgoing council … the full technical report and individual council summary … will be provided to the incoming council”.

Nambucca’s target is 60 per cent, whereas each of the other councils is aiming for 100 per cent renewables by 2030. 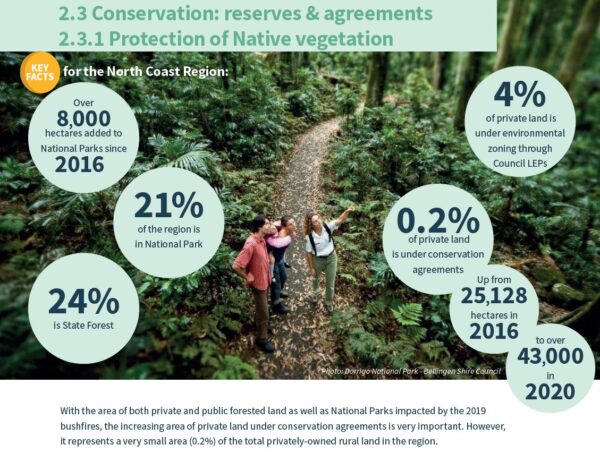 Kyogle, Lismore, Port Macquarie–Hastings and Richmond Valley councils have not set a target.

Along with Kyogle, Richmond Valley and Tweed councils, CVC does not charge its ratepayers an environmental levy.

The eight other councils collected $4,964,532 from their ratepayers in the 2019/20 year, which funded “environmental works and programs, either conducted by council themselves or used to fund community and other projects to carry out necessary on-ground works”, the report states.

“Some councils have other levies such as stormwater levies, to fund other works that benefit the environment.”

The report is presented in four chapters – People & the Environment, Biodiversity & Vegetation, Land & Soils, and Water, with each chapter broken into sub sections.

For example, mining activity is outlined in the Land & Soils chapter: “The area under active mining has reduced since 2016, from 399.6 hectares to 284.7 hectares in 2020, with the closure of a clay extraction site and 2 [two] very small mineral mines.

“Exploration is not an approval to mine, but a search for what minerals may lie below the surface.

“If suitable minerals are found, then a separate comprehensive approvals process must be undertaken.

“The majority of exploration licences are not developed into active mines (NSW Mining 2021).”

The report can be downloaded from CVC’s website on the November CVC meeting page.