It was early in December about 5 years ago.
I was homeward bound on my motorcycle after a week touring the spectacular Snowy Mountains region. The following day I’d be sleeping in my own bed, but now dusk was descending, I was tired, and I needed a sleep.
Ah! A sign! A motel advertising rooms for $89 – and with an illuminated ‘Vacancy’ board. That fitted my budget and circumstances nicely.
The receptionist was the kind of guy who doesn’t make a good initial impression. But I didn’t care. I just needed to get my head down! “Hi. I’d like a room for the night please.” He looked up, then down at his booking sheet. “That’ll be $150” he said. Shocked, I responded: “No, I only want a single room – and you’re advertising rooms for $89.” I noted that there were hardly any cars parked outside the motel’s rooms. “We don’t have any of those left” he retorted. “That’ll be $150 please.”

Perceiving that this man appeared to be someone not open to negotiation or reason, within a few minutes I was back on the bike and riding off into the night – looking for alternate accommodation.
Perhaps this incident has some parallels with that of Joseph and Mary as they arrived at Bethlehem, exhausted from their travels by foot and, (in Mary’s case), probably on the back of a donkey, for she was heavily pregnant. “No room! We’re full. You should have pre-booked. Don’t you know there’s a census happening?” 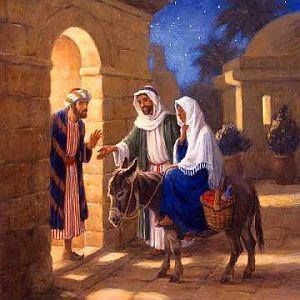 And that could have been it, for, unlike my motel, there was little doubt that the inn really was full! This innkeeper was not playing games. This is clear from his reaction when he realised that Mary was pregnant and exhausted. His compassion prompted him to really want to help this couple. “I wish I could do more” he would have said. “But I can see you’re desperate, and I’m happy for you to bed yourselves down in the stable at the back. It’s warm, and there’s clean straw. You’ll be quite comfortable there”.
Joseph knew the kindly innkeeper really was trying to help – so accepted gratefully. And the rest is history!
Is it “No room except – at my price? Take it or leave it!”  Or is it really “No room – but wait…!”
There’s a beautiful old Pitcairn Islander hymn (or sea shanty) that’s sung to this day on Norfolk Island as part of the heritage of the Pitcairn Islanders who settled there around 1857. Reflecting the maritime saga that featured the “Bounty” – of the “Mutiny on the Bounty” fame – it goes like this: “What ship is this you’re sailing in, this wondrous ship of fame? The ship is called “The Church of God” and Christ the captain’s name. Come, join our happy crew, we’re bound for Canaan’s shore! The Captain says there’s room for you, and room for millions more!”
And there, in a nutshell, is an essential truth! God always has room for those who wish to journey with him. He never turns us away – and never ups the ante in order to take advantage of us. He’s transparently generous and accommodating. Sending his Son, Jesus, into the world is proof of his desire to draw into his family all who seek the shelter of his love, and who willingly respond to his offer of eternal hospitality. Millions have! And there’s room for millions more!