“Never despise old books.” This advice was proffered by my respected minister-mentor soon after I began theological studies in the 1970’s in Sydney. On balance, I believe it was good advice.
Life does move on apace. Fashion changes. Priorities change. And tastes change. My book-loving mentor couldn’t have envisaged the degree of change that technology would unleash upon the world. And he’d probably be heartbroken if he were alive today, witnessing the decline in society’s appetite for books – and reading generally.
A little over 12 years ago, I responded to an invitation to write a weekly ‘Spiritual Matters’ column for the Daily Examiner in Grafton which, until recently, was a daily printed newspaper. Looking back at that early copy is like reading an old book – and quite interesting. The earliest I can find is dated 24 October 2009 – though I’d been writing the column for at least a couple of months prior to that.

In that early column I shared the following experience… 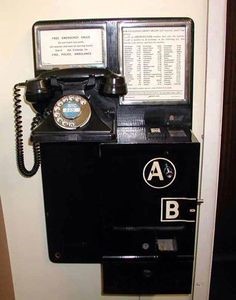 “I landed my plane at Tumut after a long flight from Broken Hill. As a Flying Padre for the Uniting Church, I was to address the local church community and share something of the work I was involved in among folk in the outback regions of the Far West.
The miracle of modern mobile phone technology hadn’t yet arrived.
My friends, local pastors in the Uniting Church, were expecting me to ring from the airport (which was a long way from town). They would then drive out and pick me up. So, after securing the Cessna at the deserted airport, I located a public telephone. At that point I found I had a problem! No, the phone hadn’t been vandalized! But, I had no change in my pocket!
The phone was one of those ancient models with two buttons: “A” and “B”.  (Do you remember them?). Well, I decided I’d ring the operator and reverse the charge. A simple solution. But alas, too simple! The operator told me it wasn’t possible to reverse the charges from a public telephone! And no, she had no other suggestions as to how I could make contact with my friends. Sorry.
My heart sank. What do I do now? Well, I quickly realized that I had one more arrow in my quiver. I could pray! And as I prayed and shared my problem with God, I idly – or optimistically – pushed the button marked “B” on the telephone. (For younger readers, this is the button one pushes in order to retrieve coins previously deposited, but not used!) And out came the coins I needed to make my call!

I’ve shared this story a number of times over the years because it reminds me that we always have more resources to draw upon in difficult situations than we sometimes think. Some would say of this experience that its resolution was the product of coincidence. But as a Christian, and one who had just shared a problem with God that appeared insurmountable, I believe that God acted to meet my need – a belief that has been strengthened over the years by numerous other similar experiences.”
Reading about this again has served to remind me that some things never change! One of the oldest books of all – the Bible – is still refreshingly relevant and an indispensable handbook of life. Also unchangeable is the power of prayer! And for these, I thank God!