The Port of Yamba is Australia’s easternmost sea port. It serves the Northern Rivers and services general cargo trade to Norfolk Island, New Zealand and other Pacific islands. Over recent years, while losing the Island Trader (now based at Port Macquarie and servicing Lord Howe Island), marine traffic has increased with the gradual expansion of the Harwood Slipway, which carries out maintenance on various ships and vessels.
Geoff Helisma observed and met some of the men who operate the port.

It’s about 5.20am when I arrive at the pilot station on the hill overlooking the entrance to the Clarence River. The Port of Yamba’s harbour master, Captain Simon McEvoy, greets me and the services officer, Wayne Smith, provides me with an induction into the various safety procedures before we head out to sea.
Soon after, we’re at the wharf in Yamba Bay where the tug, Francis Freeburn, and the pilot boat, Governor Hunter, are tied up. Captain McEvoy fits me with a life jacket and explains how it inflates if immersed in water. Meanwhile, Smith is checking over the Governor Hunter, a 25-year-old boat recently seconded from the Port of Sydney. “It’s a lot safer crossing the bar, delivering the pilots to vessels offshore, than it was on the Francis Freeburn,” Smith says.
On board are the port’s harbour master, Captain McEvoy, relief pilot, Captain Alan Jones, Smith and deckhand Chris Lunnon.
We cruise quietly past the many yachts and boats moored in the bay, the pre-twilight makes it hard to see, but the boat’s navigation aids show the clear water ahead. As we round the corner of Dart Island and head east, the sunrise is delayed by low, cumulous congested clouds – rain showers look likely.
It’s 5.53am as we motor through the hole in the middle wall, the tide gauge reads 1.6metres and the boat begins to feel the swell, which today is only a metre or less. A call comes over the radio, “we’re 2.63 nautical miles offshore” and, as we travel between the break walls, I can see the ocean-going tug, Sea Force, and a barge, Steel Hauler, which the tug has towed from Sydney, off in the distance.
My spring-loaded chair rises and falls as we traverse the closely-stacked swells – I’d only been out to sea once before and I was wondering if I’d be seasick (I wasn’t). The water is swirling and still flowing out to sea, despite the rising tide, due to the flood waters.
“It is a big superstructure,” says Lunnon.
“That’s going to be interesting to push in,” Captain McEvoy adds.
From a distance it looks like an amusement park ride, something like the Mighty Mouse. As we get closer, the barge’s function is still a mystery.
Ross Roberts from the Harwood slipway, where the barge is undergoing maintenance, later tells me that the barge was used to lay cables.
The port pilots transfer to the Sea Force, where they will take command and navigate the bar crossing and journey upriver to a temporary mooring at the Goodwood Island wharf. After returning to port we board the Francis Freeburn and cruise back out to the Sea Force and barge, which have made some progress towards the bar.
Smith steers the Francis Freeburn around behind the barge and Lunnon uses a gaff to grab a rope trailing from the barge. He soon hitches the rope to the Francis Freeburn’s bow and warns me to stay in the cabin, in case the rope snaps and recoils. Smith rides the throttle, backing off, then accelerating, as the swells, in turn, reduce and increase the rope’s tension. He keeps the barge straight and under control.
It’s an uneventful bar-crossing – the swell is low and the wind is light – as is the journey up the river. At Goodwood Island, the tugs work together to manoeuvre the barge alongside the wharf. I ask Smith if escorting vessels into the port is always this routine.
It’s 9.45am when I step off the Francis Freeburn onto the Yamba Bay wharf. I ask Smith to recall a less-routine bar crossing, but he plays his cards close to his chest. With a wry smile, he answers: “It’s hours and hours of boredom and moments of sheer terror.” And that’s all he has to say – perhaps it’s those moments of sheer terror that keeps Smith enamoured with his job. 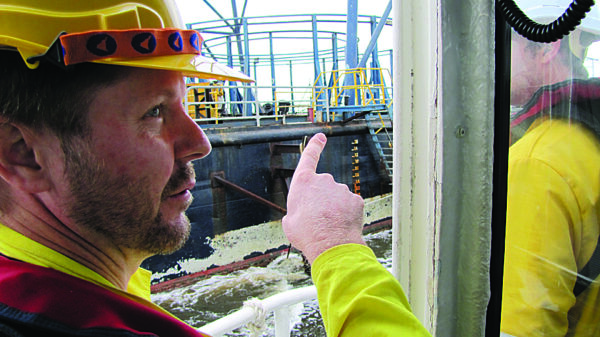 Capt. Simon McEvoy
Harbour master, Captain Simon McEvoy, 43, has held the position for the past two years. “I went to sea as a deck boy in the mid 1980s, but did work experience with Maritime when I was at school, funnily enough,” he says.
“I was always attracted to the ocean – I had an interest in boats and ships and an uncle who went to sea. I was going to sea one way or the other. To get a commission you had to do year 11 and 12 … or, as in my case, I had the opportunity to get to sea. I did a week of year 11 then went to sea.”
Since that time Captain McEvoy worked his way up the ranks and has captained “eight or nine vessels – bulk carriers, tankers a variety of ships”.
“I was interested in coming ashore at some stage to do pilotage, and I’d been trying for quite a while and hadn’t been able to get a break anywhere. There was one colleague, who got into Sydney in the mid 2000s; he said to me, ‘you have to hang around as if it’s a milk bar’. Unless you’re prepared to do that in some of the ports, you really have to have that relationship [established] or otherwise forget it.
“I got pretty close [to getting a port pilot position] a couple of times in Newcastle; I was going for an interview again when I got this job, so I actually pulled that interview.
“Today we had two pilots because of the nature of the job, the barges are the nastiest things we’ve done – they’re heavily affected by wind and swell; things can go awkward in a short time.
“It’s the smallest percentage of the work we do [piloting], but it’s the most critical part of the job. The rest of the time it’s management issues of the port: staff, navigation aids, soundings and hydrographical surveys, maintenance of the two vessels and the wharf, heaps of stuff.”
Captain McEvoy sums up his job, much like Smith did earlier in the day. “It’s 99 per cent boredom and one per cent sheer terror.”

There are two relief harbour masters for the Port of Yamba, captains Alan Jones and Ian Poolman. Captain Jones was the harbour master for 13 years before Captain McEvoy took over; Captain Poolman has held his position at the port for the past 16 years. 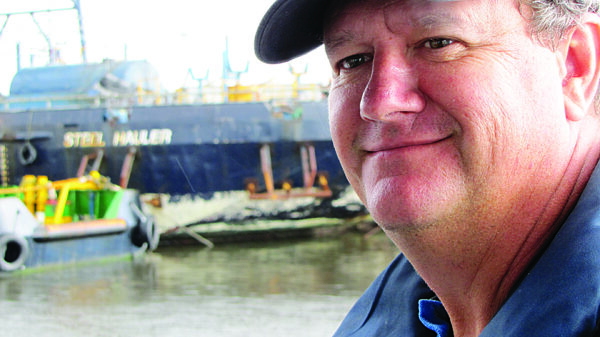 Wayne Smith
Port services officer Wayne Smith, 48, who works 38 hours each week and is on-call 24/7, was destined to work at the port. “I always wanted to follow in my Dad’s footsteps. When the opportunity arrived, I jumped at it,” he says. “I’ve got salt in the veins, mate – I never thought of doing anything different, I’ve been working at the port for 27 years.
“Dad worked the ports for 28 years. From memory, he started at Ballina [once the second busiest port on the NSW coast] and transferred from there, when it closed, to here. I grew up in the pilot’s cottage up on the hill.
“I crossed the bar [at Ballina] when I was six months old, my son crossed the bar [at Yamba] when he was six weeks old – that’s tradition. There were so many times being on the boats with Dad – he deck-handed with his father on a tug called the Leo for the CSR sugar mill on the Richmond River, and I deck-handed with him on this boat, the Francis Freeburn.
“I learnt the ropes as a deckie and worked my way up to master – I’m third generation and the last person to ever live and work at the pilot station. Our house is a big office now and the boatman’s cottages have all gone back to the lands department. The cottage used to be part of the job and the salary.”
The small nature of Yamba’s port means that the few employees who work here multi-task and do jobs that would normally be done by specialists in the larger ports. “I do everything,” Smith declares.
“Anything from using a computer to do admin, everything from purchasing to boat maintenance, repairs, buoy work, navigation aids, wharf maintenance, the whole lot.
“Today was just business as usual, some days it’s flat like today; beautiful. Some of the night time crossings are pretty ordinary, though, when you can’t see. If you’ve got a moon, that helps, we try and make the bar crossing on the top of the tide.”
Smith’s not inclined to reveal much about any particular incidents during his time on the job, but “I’ve been out on plenty of rescues, though”. 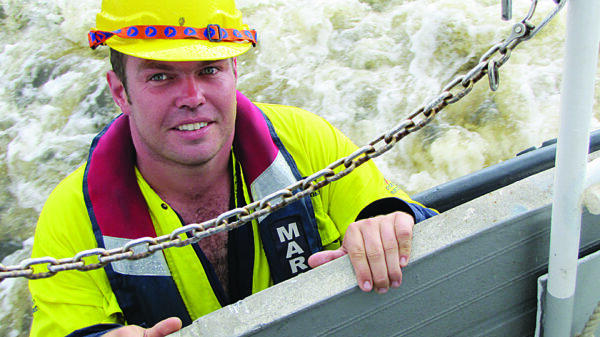 Chris Lunnon
Deckhand Chris Lunnon, 25, moved to Yamba nine years ago. His family, until recently, owned a coffee shop in Yamba. “I’ve been working here for five years,” he says, “and I was voluntary for two years prior to that.
“When I left high school, I went to the Maritime office in Coffs Harbour to enquire about work, and the guy said someone’s pretty much got to die or retire for a job to become available in the Maritime.
“So I sort of gave up on that avenue and kept working in the family business, until I met these guys and they gave me the perfect opportunity to get my foot in the door.
“I’d be working at the coffee shop and whenever there was shipping on, I’d come out and work alongside the deckhand and learn the ropes and get some sea time and experience, so if the time came up to be employed, I was there and ready.
“I did all the TAFE courses and got the tickets and whatever I needed to become a deckhand – now I’m working my way up to get my masters.”