LA NIÑA TO TRIGGER HEAVY RAIN AND FLOODING THIS SUMMER

HEIGHTENED RISK OF CYCLONES AND THUNDERSTORMS

The severe multi-year drought across the eastern states is being subdued in 2020 as rain begins to replenish the dry land and empty dams.

Observational data and global models point towards a continuation of this trend into 2021, with Australia expected to experience even heavier rain in the coming months as moist tropical air is directed towards Australia from the Pacific Ocean.”

Despite the rain, temperatures are likely to remain warmer than normal in many regions, leading to a heightened risk of heatwaves.

For Western Australia, where the drought has intensified this year, there is also the risk of major bushfires threatening life and property.

This year has been another very warm year for Australia with all regions apart from southern South Australia, northern Victoria and inland New South Wales recording maximum temperatures above the long-term average.

This trend will continue into the severe weather season for much of Australia with maximum temperatures from October to April likely to remain above average. However, it is unlikely the coming summer will be as extreme as last summer due to the increased cloud cover and reduced solar radiation associated with La Niña.

Below average maximum temperatures are favoured across parts of eastern inland Australia for the first time in nine years. Bushfires will not be as widespread or fierce across eastern Australia compared to last season due to the wetter soil and vegetation combined with the forecast of cooler and wetter conditions into early 2021.

For Western Australia, there is a heightened risk of bushfires due to an ongoing record drought.

Although this severe weather season is unlikely to be as hot as recent years, La Niña phases of the Pacific can increase the frequency of heatwaves over southern Australia due to a stalling of weather systems. While there is no universal definition of a heatwave, Sky News Weather uses the 5/5 rule – five consecutive days where the maximum temperature equals or exceeds five degrees above the average for the location in question. This represents an intense, prolonged and dangerous heatwave which will cause severe stress on human health.

2020 has been a year of transition with bushfires, dust storms and drought being replaced by rain events and flooding. Pockets of eastern Australia have seen their wettest January to August period since 1990 with rain totals in many areas already three times what was received throughout the whole of 2019.

Despite the rain this year, 36-month deficits of 500mm to 1,000mm still exist across much of eastern Australia. A late forming La Niña should ensure the October to April period remains wetter than normal across northern, central and eastern Australia. There is a high risk of an early monsoon and the continued presence of rain should further saturate catchments, fill dams and exacerbate the risk of flooding. If La Niña conditions persist through the summer, it will be the first such event since 2010-2012 and represents the best chance of deficit removing rains through the coming seven months.

For southern and western WA, the Pacific influence of La Niña is geographical distant, and there is little hope for relief from their record drought as the winter rains retreat to the Southern Ocean. Read more here. 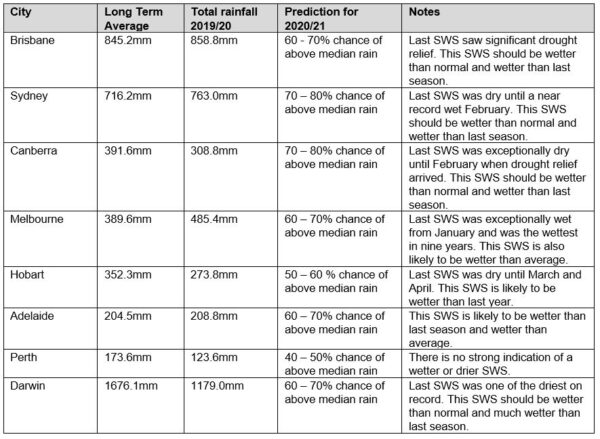 Cyclone numbers have been slightly below average during the past few years with just eight named systems in the Australian region last wet season, three below the long-term average.

This season is likely to have earlier and more frequent cyclone activity due to a La Niña phase of the Pacific and warmer than normal ocean temperatures off our tropical coastline, although this should be offset to a degree by the late formation of the La Niña combined with the observed decline in cyclone numbers over recent decades.

Between nine and 13 tropical cyclones are likely over Australian waters (90E to 160E) this cyclone season, of which four to six should make landfall. A total of 10 or more tropical cyclones would represent the busiest season in 10 years.

Three to four tropical cyclones are likely off the north coast between the Kimberley and Cape York Peninsula, three of which should cross the coast. Last year we saw one tropical cyclone, Esther, which made landfall. Read more here.

The upcoming thunderstorm season is likely to be more active than normal across large parts of Australia due to the combination of La Niña and higher than average sea surface temperatures off our coastline which should provide sufficient humidity for convection. Despite the wet forecast for parts of the east coast, northeast NSW and eastern Queensland should have suppressed storm activity due to stronger than average trade winds bringing cooler more stable air to the region. Read more here.