Members of Lions Club of Clarence – Environmental, community members, Clarence MP Chris Gulaptis and representatives from the Saving Our Species Program (NSW DPIE), Transport for NSW and Clarence Valley Council were on hand at Taloumbi for the launch of initiatives to help protect the endangered coastal emu. Images: contributed
From the Newsroom

There may be fewer than 50 coastal emus left in existence, but the efforts of Lions Club of Clarence – Environmental (LCC-E) and its proactive relationships with government departments and Clarence Valley Council (CVC) have resulted in measures to protect the endangered bird.

The speed limit along a 7.2km section of Brooms Head Road, Taloumbi, has been reduced from 100km/h to 80km/h and warning signs have been painted on the road. 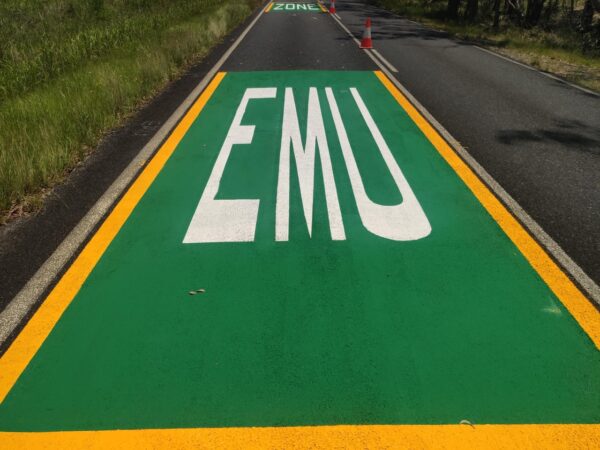 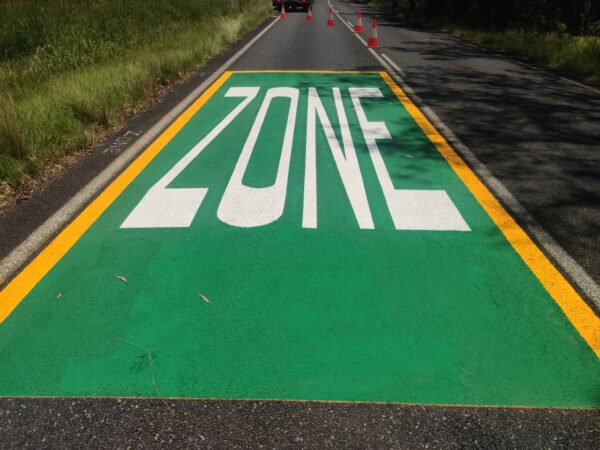 The LCC-E campaign, to improve safety for emus and drivers where emus regularly cross, started with a petition to CVC’s traffic committee, which LCC-E cofounder and coordinator Barbara Lindley said, “went no further”.

“We realised we had to do something different if we were going get a speed reduction on Brooms Head Road, as past submissions had not worked,” Ms Lindley said.

“We needed people power and the backing of an organisation to help bring about change – so the Clarence Lions environmental group was formed.

“Having Lions backing us and working with Rebecca Lucock from Gulmarrad, we drafted a submission and sent it straight to Transport NSW – at the same time we realised we needed community support, so a petition was undertaken to reduce the speed limit and to put signs across the road.”

“Transport NSW is only interested in speed reduction if you have the correct number of houses along a road and there are major safety concerns … so we targeted that criterion.

“Consequently, from our first meeting, an independent road review was commissioned by Transport NSW.”

In the end, Ms Linley said it all came down to the relevant parties working together with the community at large: Saving Our Species (NSW Department of Planning, Industry and Environment), CVC and Transport NSW.

“This week it all came together; the community has achieved amazing things, not just for the emus, but for the residents along Brooms Head Road,” she said.

Following the launch of the vehicle activated signs, road patches and speed reduction, Clarence MP Chris Gulaptis thanked LCC-E and the “community of the Clarence Valley for their passionate campaign to save this culturally and ecologically significant species”.

“The club has raised money through its own fundraising initiatives, which funded the road patches … to remind drivers they are travelling in an emu protection corridor and to take extra care,” he said in a media release.

“A key threat to the coastal emu population is vehicle strike, with studies showing as many as 60 emus have been killed by vehicles in the past 10 years.”

“We have had incredible backing and people have come out of the woodwork; Yaegl Traditional Owners Aboriginal Corporation support the initiative, too; this couldn’t have happened without the community’s support,” she said.

“This population of coastal emus is part of the last known population in northern coastal NSW and every measure we can take to protect them is important,” she said.

“An adult emu and his young chicks have recently been sighted using the corridor.”

CVC’s environment and planning director, Adam Cameron, said, “The speed limit reduction will increase journey times by 64 seconds at most, which will not only reduce the instance of vehicle strikes but also help prevent vehicles leaving the road to avoid an emu strike.”

Residents can help save the coastal emu by: reporting sightings of emus in the Clarence Valley Local Government Area via Clarence Valley Council’s online sightings register; installing emu-friendly fencing if they own land where emus roam; and, being on high alert for emus on local roads.