A new study by the NSW Bureau of Crime Statistics and Research (BOCSAR) has found that many NSW residents hold mistaken beliefs about crime and the criminal justice system.  62% of survey respondents believe that violent crime is on the rise (it is stable) and 44% believe that property crime is increasing (it is falling).

Survey respondents also frequently underestimate the proportion of offenders who are convicted and imprisoned.

These findings were drawn from a representative survey of 2,000 NSW residents in May and June 2019. The survey was carried out by the NSW Bureau of Crime Statistics and Research. Similar surveys were conducted by the Bureau in 2007, 2012 and 2014.

The study also found that the majority of those surveyed in 2019 are confident that the criminal justice system (CJS) respects the rights of the accused (74%), treats accused people fairly (74%) and brings people to justice (60%).

However, two out of every three (66%) believe sentences handed down by the courts are ‘too lenient’, only 44% expressed confidence that the CJS meets the needs of victims and only one in three (31%) NSW residents were confident that the CJS deals with cases promptly.

Confidence in the CJS was found to be higher among men, young people, the more highly educated, people on higher incomes, and those residing in metropolitan areas. It was lower amongst people recently exposed to crime and those who mistakenly believe that crime is rising.

The 2019 data show that levels of confidence in the CJS have generally not improved over the last decade and that punitive views remain common. The exception is the extent to which the CJS meets the needs of victims, which is now significantly higher than in 2007 (44% vs 36%, respectively).

Commenting on the findings, BOCSAR Executive Director, Jackie Fitzgerald, said while confidence in the justice system is generally high there is still room for improvement. “While it is heartening to see that significantly more people now believe the justice system is meeting the needs of victims, more than half the respondents still indicated that this is a problem”. 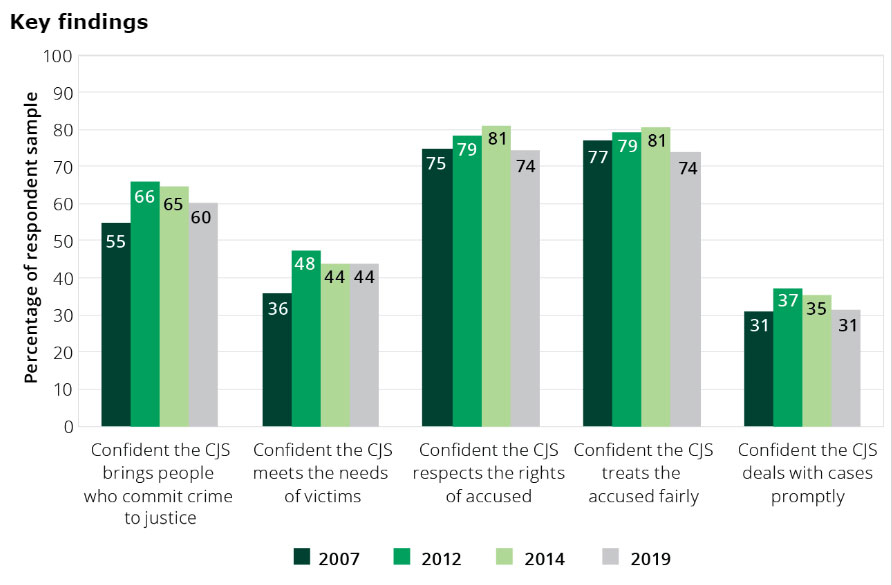