The Yamba Community Garden has been up and running since April 2011, thanks to a $50,000 Northern Rivers Food Links Project grant and $10,000 from the Clarence Valley Council.

Geoff Helisma dropped in during one of the group’s regular working bees to find out how the concept was panning out – and, after talking to a handful of gardening enthusiasts, discovered the garden was living up to its community tag. 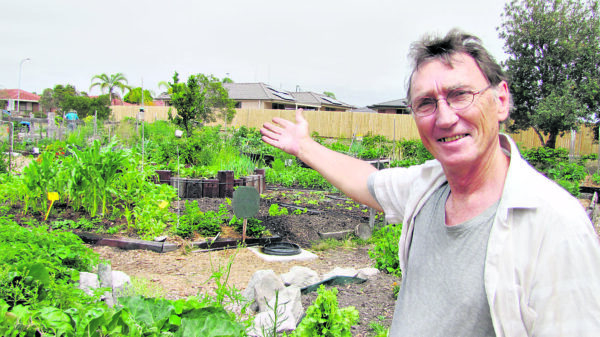 Eric Brown, who is throwing mulch onto a newly-prepared garden bed, pauses and throws his arm out, as if to say: look at this garden, it is magnificent! And it is; it’s green, lush and abundant. He doesn’t have a plot of his own, but he is one of the foundation members and dedicates his time to keeping the garden’s environment healthy. He describes the satisfaction he gains from his work here as “tremendous”.

“I don’t see having my own bed benefits me,” says Eric, who has studied horticulture. “The way it works, if you’re a member, all of the community gardeners have access to whatever grows in it. I’ve been into horticulture for quite some time. I had my own commercial nursery at Jiggi [west of Lismore] where I grew palms, herbs and ornamental grasses – all mono cultures.

“Any excess, the members pick, then put them into their own gardens.” 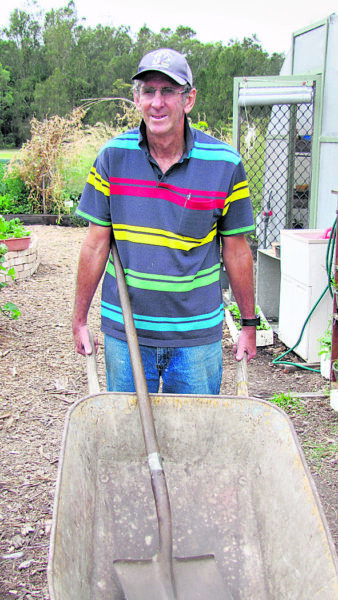 Larry Griffin, the garden’s president, who has been here from the beginning, lives on the hill at Yamba. “I’ve only got sand there, it’s steep and a lot of work, my backyard doesn’t lend itself to a veggie garden,” he says. “Here you learn things from the other members and the social side is good; I didn’t know any of the people here – I was new to town myself.”

Larry says he particularly enjoyed being involved in the garden’s evolution. “Working together during the construction has been good, that’s very satisfying. That’s all finished now; it’s time to get into the gardening.” 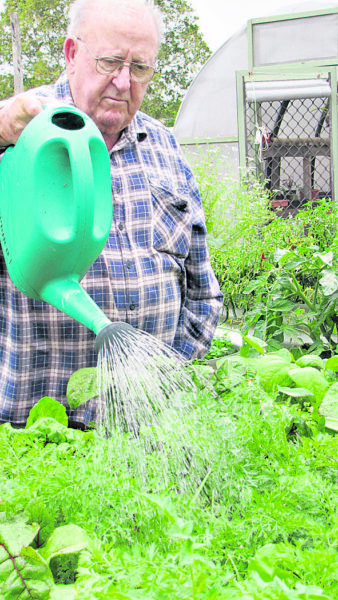 Frank Ryan is a newbie; he’s been a member of the community garden for about two months. “I only know Larry and Errol and John [who wasn’t at the garden on this day] and a couple of the ladies, and it’s the first time I’ve seen Richard [Moses] here.

“Apparently, it’s nice when they have pizza and barbecues sometimes [in the gazebo, which has a wood-fired pizza oven]. Everybody is very friendly, which is really good, so you don’t feel out of place here.”

Frank moved to Yamba from Sydney to be near his daughter, Christine. “Down in Sydney, all I could really grow was tomatoes where we lived; the soil wasn’t real good. When I came here and heard about this, I rang up [inaugural president] Ron Jurd and asked if there was any chance of getting a garden, and lo and behold I got one. I’m having the time of my life here growing all the vegetables. It’s an interest for me. I’m enjoying it.

“I love lettuce, I love tomatoes, I’m just waiting for them – I hope no one jumps the fence and starts pinching things [laughs].

“I’ve been giving my daughter some spinach and lettuce and all that sort of thing. And my son in law, he’s starting a garden in his backyard at Wooloweyah, as a result.”

Carolyn Jeckeln, who has been at the garden since it began and is interested in growing organic food, says “getting your hands dirty is fun”. She comes to the garden to tend her plot twice a week. At her home, she says, there are too many gum trees and too much shade, but she has a “little herb garden” there.

“I’ve met heaps of good people and learnt a lot about gardening from everybody else,” she says. “Gardening is something that you never really know everything about, you’re always learning; that’s the great thing about it.” 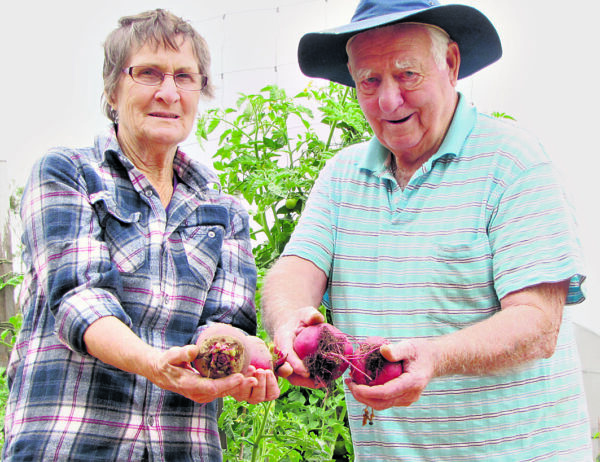 Lorraine and Frank Dunford have a habit of finishing each other’s sentences, or answering together. “It’s a good time for us to do something together, to be relaxing and,” says Lorraine, “meet people,” says Frank.

“We started with our brother,” says Lorraine, “-in-law, but he got too busy,” Frank says. Lorraine: “He’s a gardener.”

Has gardening been something you’ve done together over the years?

So you’ve made new friends here? Frank: “Oh, a lot.” Lorraine: “And you can help others and pass little tips around, and you can also give things to other people if you’ve got too many for yourself.

“We’ve learnt a lot, haven’t we [to Frank]? We made a lot of boo boos when we first started, but I think we’ve learnt a little bit, because there are some very knowledgeable people here.

“We love it, absolutely love it here.” 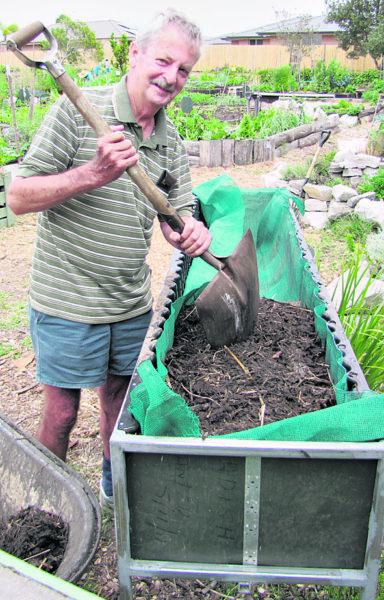 Richard Moses is busy filling a raised bed (designed and built by Ron Jurd) for a member who is confined to a wheelchair. Richard used to grow his vegies at home in pots and says he has enjoyed the opportunities to meet new people during his 14 months as a member, “and you learn more about gardening and pick up odds and ends, like how to control insects, off the other members.

“They’ve all got good ideas, plus, when you haven’t got a big backyard, it’s easier to grow your veggies here. And we’ve got the community garden in the centre, so any member can come in here any time and pick what they like.”

Has gardening here improved the abundance of what you grow?

“It’s unbelievable, the tomatoes I get and all the vegies and everything. It’s just unbelievable; it doesn’t take long to get them going.” 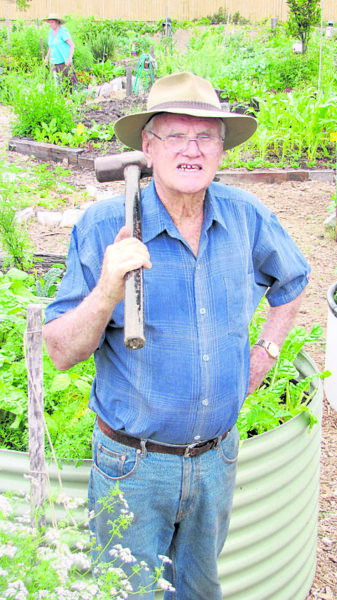 Ron Jurd is wielding a sledge hammer. He stops to speak in between doing some of the heavier jobs around the garden. “I’ve got more experience in construction than anybody else here. I know what’s happening and what should be, what’s safe and what isn’t safe,” he says.

“I had a property at Merriwell, cattle mostly, and used to grow a crop in the early 1990s. I like growing things. That’s been with me since I was a toddler; with me grandfather, he used to be a good gardener and I was shown all along how to grow your own vegetables to eat.”

He enjoys passing on his knowledge and using it to improve the garden, and he’s “still learning, too: you’d be surprised, you never stop learning”.

Ron says the community garden has exceeded his expectations. “I thought it would just be a garden and teaching people how to grow vegies and stuff like that, but the social side of it is one of the major things that has happened. If people are a bit lonely, they can come here and sit and have a cup of tea and exchange ideas – it’s great … it’s actually really great.”

This article was originally published in Clarence Scene in 2012