This week World Habitat Day was celebrated and while the United Nations’ emphasis is on shelter for humans, man-made structures can make the most unlikely homes for other species.

A project funded by the Fisheries Research and Development Corporation explores the pros and cons of leaving old oil and gas infrastructures in the waters off Karratha in northern Western Australia as they are now home to a myriad of marine species.

“Fish populations around some of the platforms near Thevenard Island (off the coast of Onslow in the Pilbara region of WA) are about 200 times greater than on the natural reef,” says project leader Euan Harvey, professor of marine science in the School of Molecular and Life Sciences at Curtin University.

When this infrastructure was installed in the 1990s, the regulations clearly stated that the whole lot had to be removed once the project finished. Now, this research has established that the ecosystems formed around the five structures hold substantial ecological, social and economic value.

This has been determined considering the effect the structures are having on both commercial and recreational fishing, with associated tourism potential.

Recfishwest chief executive Andrew Rowland says recreational fishers are aware of the benefits of built marine structures. Even though they are not currently allowed to fish in the exclusion zones around oil and gas platforms, he says the sector recognises the value of the marine life that has grown on, around and near these structures. “From our perspective, we’re looking at the end of life of these structures, how we can capitalise on those ecosystem benefits for new fishing experiences,” he says.

The research is also addressing possible concerns associated with leaving the structures in place, such as the potential of chemical leaching into the environment and the long-term legal liability and responsibility for clean-up, if issues are identified 50 or 100 years from now.

“Our work will inform future policy decisions, not only for the decommissioning of built structures in marine environments, but also for the design and installation of future marine infrastructure projects, such as wind and wave renewable energy projects.” says Professor Euan Harvey. “Structures could be designed with decommissioning and removal in mind”. 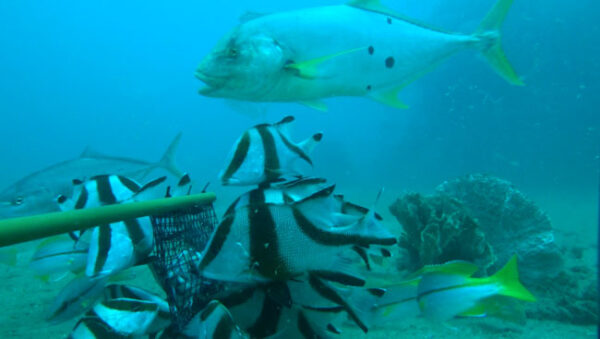