C Cusack’s tweet – no caption required
From the Newsroom

“We are really concerned that, without policy changes, our region will suddenly become deeply vulnerable to a major influx of newly freed Sydneysiders, while we are still short of the 70 per cent safety target,” the MPs write.

“This apprehension is shared by locally-based medical professionals we have consulted, as well as the broader community.

“We cross party MPs recognise that we are all in this together.

“We therefore ask you to adjust public health orders to prevent this happening, by restricting non-essential travel to the north coast until it, too, has reached the milestone.” 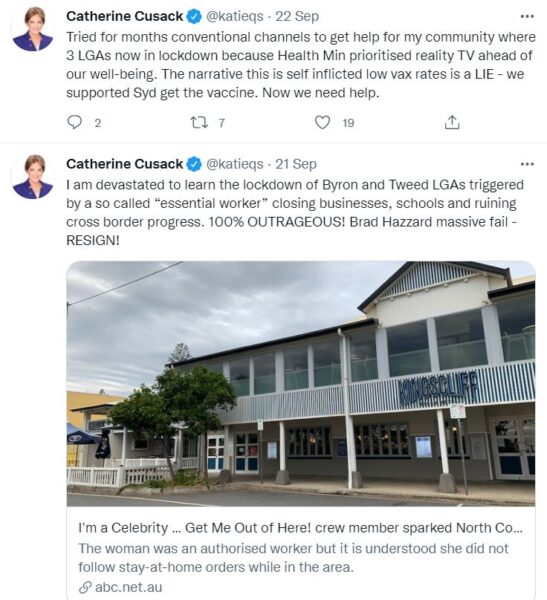 Lismore MP Janelle Saffin started the initiative when she wrote to Mr Barilaro on Monday September 20, asking for the “release of a detailed road map for opening up from Covid-19 restrictions that is particularised to the circumstances and challenges being faced by local communities across regional and rural NSW”.

Ms Saffin wrote that “the NSW Government is flagging to relax restrictions once 70 per cent of the adult population is double vaxed” and that “regions like the Northern Rivers and Northern Tablelands, where vaccination rates lag behind Sydney, seek reassurance in these uncertain times”.

“The process needs to be a staged one, which allows our LGAs to reach 70 per cent, or higher, fully vaccinated, in line with Greater Sydney where the rollout has been prioritised,” she wrote.

“…I ask that you meet with myself and local MPs to discuss a detailed road map to recovery for regional and rural New South Wales to fill the void which currently exists.”

Ms Saffin’s letter was the precursor to a multi-partisan hook-up on Tuesday September 21, which resulted in the politicians’ joint letter, sent on Wednesday September 23.

The politicians requested a change to public health orders, in order to prevent the spread of Covid to the Northern Rivers, writing: “This is not just good health policy; it also provides Sydneysiders with an opportunity to show courtesy and solidarity with us, in the same way we did [during] their darkest hour by redirecting some of our vaccine supply to its HSC students.

“We cross-party MPs recognise that we are all in this together and stand ready to brief you further on the situation.

“Thank you in advance for your consideration and decisive action on this matter.”

Ms Saffin’s initial letter also called for “the NSW Government to be more transparent about how many residents of Greater Sydney are being issued with permits to travel to the north coast, whether they are fully vaccinated and why they are coming”.

“How many others might be slipping through the net, exposing the regions to Covid outbreaks and clusters?” she asked.

Meanwhile, Liberal MP Catherine Cusack MLC, who resides at Lennox Head, Tweeted her concerns on Tuesday September 21: “I am devastated to learn the lockdown of Byron and Tweed LGAs triggered by a so called ‘essential worker’ [is] closing businesses, schools and ruining cross border progress.”

She described the situation, regarding the Covid-positive reality TV crewmember who flew to Ballina on Saturday September 18, as “100% OUTRAGEOUS!” and said Health Minister Brad Hazzard was responsible for a “massive fail – RESIGN!”

“I am calling on Brad Hazzard to resign because he has ignored the regions and I hold him personally accountable for the new lockdown and destruction of the progress we have made on the Queensland border arrangement,” Ms Cusack was reported to have said in the Sydney Morning Herald.

Ms Cusack did not respond to several messages on her office’s phone and to her Facebook page.