Over a million people around the world have died as a direct result of the COVID-19 pandemic, but now researchers have counted the indirect loss of lives caused by social, economic, environmental, and healthcare changes. Looking at data from 21 industrialised countries, including New Zealand and Australia, the research team estimated that overall, 206,000 more people have died than would have without the first wave of the pandemic. New Zealand and Australia had “no detectable excess deaths”, compared to a high mortality rate in England, Wales, and Spain. In New Zealand, the authors found a small decline in the number of deaths among men below the age of 65, which they say could be due to fewer injuries.

England and Wales and Spain experienced the highest numbers of excess deaths as a result of the COVID-19 pandemic from mid-February to May 2020, suggests a modelling study of 19 European countries, and Australia and New Zealand, published in Nature Medicine. The results indicate that around 206,000 additional deaths occurred across these countries than were expected had the pandemic not occurred.

The current COVID-19 pandemic has caused over 1 million deaths directly from SARS-CoV-2 infections globally. However, the indirect effects of the pandemic and responses to it through social, economic, environmental and healthcare pathways can also be substantial. Understanding the total impact of the pandemic on mortality is important for assessing its full impact on public health and policy responses.

Majid Ezzati and colleagues used weekly data on deaths from 2010 to mid-February 2020, from 21 countries, to create a model that could predict how many deaths would have occurred by May 2020 had there not been a COVID-19 pandemic. They compared this figure with the actual reported deaths in the countries studied to calculate the excess deaths that resulted from the pandemic whether it was from COVID-19 or other causes. The authors estimate that an additional 206,000 deaths had occurred as a result of the pandemic in these 21 countries, with the highest figures for all-cause mortality per 100,000 people in Spain, England and Wales,  Italy, Scotland and Belgium. The authors found that the numbers of excess deaths for men and women were similar, with 105,800 deaths in men and 100,000 deaths in women. They indicated that England and Wales and Spain experienced the largest increase in mortality, with nearly 100 excess deaths per 100,000 people, which was an increase of 37% for England and Wales and 38% for Spain, relative to levels without a pandemic.

The authors conclude that the differences in mortality among the 21 countries reflect the variability in characteristics of the populations, policy responses to the pandemic, the preparedness of public health systems, and extent of community-based and facility-based care systems. They argue that in addition to suppressing transmission, building integrated care pathways to allow appropriate triage and care for those with long-term health conditions will be important for minimizing deaths resulting both directly and indirectly from the ongoing pandemic. To achieve this, countries may need to reallocate and expand healthcare resources, particularly in settings in which there has been underinvestment in health and social care systems, they suggest.

These comments have been collated by the Science Media Centre to provide a variety of expert perspectives on this issue. Feel free to use these quotes in your stories. Views expressed are the personal opinions of the experts named. They do not represent the views of the SMC or any other organisation unless specifically stated.

“The COVID-19 pandemic has impacted on the health and wellbeing of millions of individuals worldwide and is associated with considerable direct and indirect morbidity and mortality burden. Quantifying all-cause mortality is an important mechanism to understand the effects of major public health emergencies, and provides critical intelligence relating to local, international, and global capacity to respond.

In Victoria, Australia, the State Government Department of Health and Human Services has established robust surveillance systems to monitor mortality impacts directly and indirectly associated with COVID-19. These systems include integration of the Victorian notifiable disease dataset with the state’s death register (Victorian Death Index) to improve ascertainment of deaths attributable to COVID-19, and the monitoring of all-cause, respiratory and cardiovascular deaths.

Weekly mortality due to specific causes of death (respiratory diseases) was calculated for 2020 (to 30 September 2020) and was compared to an average number of deaths recorded over the previous 5 years (2015-2019). These average rates serve as a proxy for the expected mortality rate, providing an indication of excess mortality (1). Keyword searches were used to identify relevant respiratory diseases: pneumonia, influenza, chronic bronchitis, emphysema, asthma, and chronic obstructive pulmonary diseases.

Between 1 January 2020 and 30 September 2020, there were 798 deaths among laboratory-confirmed COVID-19 cases notified to the Department of Health and Human Services, of which 751 (94 per cent) were among people aged 70 years or older. Weekly mortality rates for respiratory causes were examined among this older cohort and are shown in Figure 1. The plot indicates that, despite the 751 COVID-19 related deaths, mortality due to respiratory causes is below expected levels in 2020. These findings are consistent with the findings of Kontis and others (2), demonstrating no detectable excess deaths in Australia.

During the winter months, mortality is typically higher among elderly Australians, which is thought to be attributable to infections with influenza and other respiratory viruses (3). However, in 2020, the incidence of respiratory infections seen in national sentinel surveillance systems has been extremely low (4). The reduced mortality rate may be attributable to restrictions that were implemented in Victoria to reduce local COVID-19 transmission.” 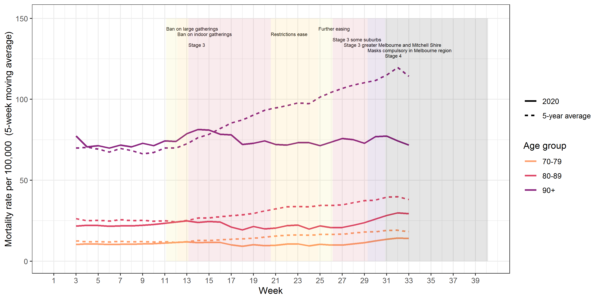