NASA is sending astronauts back to the Moon by 2024. What would you take if you were going?

To take the challenge to the next level, the agency also has an Expert Mode: follow the strict guidelines astronauts must adhere to when packing their “personal preference kits.” Each astronaut traveling to the International Space Station is only allowed a 5-by-8-by-2-inch (12.7-by-20.3-by-5.1-cm) volume of space to carry personal items. That’s significantly smaller than a standard airplane carry-on bag, which measures 9 inches by 14 inches by 22 inches.While advancing its Artemis program – which includes sending the first woman and next man to the lunar surface in 2024 – NASA wants to know what you would pack for a trip to the Moon. The agency kicked off a new social media campaign this week asking participants to share what would be in their lunar suitcases online using #NASAMoonKit.

“We’re excited to see what you would pack for the ultimate adventure – a trip to the Moon,” said Bettina Inclán, NASA’s associate administrator for Communications at the agency’s Headquarters in Washington. “At a time when many of us are working, teaching or learning from home, this is a unique way to learn more about the Artemis program and join NASA as we prepare for humanity’s next steps on the lunar surface.” 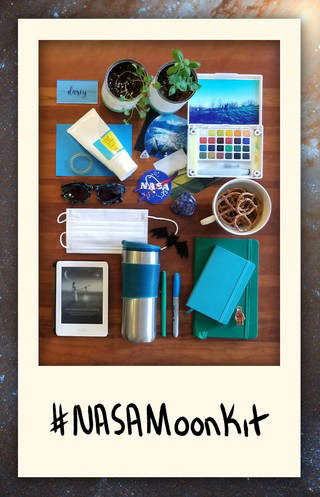 The digital movement will lead into the agency’s Green Run rocket test planned for November. With the Space Launch System (SLS) rocket’s core stage anchored in a test stand at NASA’s Stennis Space Center near Bay St. Louis, Mississippi, NASA will fire up the powerful stage and fire its four engines for up to eight minutes. That test, known as a hot fire, is the first time the core stage will be operated and the last in a critical series of Green Run tests for the stage before the rocket is assembled for flight at NASA’s Kennedy Space Center in Florida. The next time the core stage will fire up again will be for the Artemis I launch next year.

Select submissions that catch the digital team’s eye will be shared on NASA’s social media accounts or as part of the Green Run broadcast next month. Additional terms and conditions are posted online.

Can’t decide what to pack or looking for other ways to get involved? NASA also has regular opportunities to provide solutions to NASA while winning prizes and more through its NASA Solves website. A few of the current challenges available right now are:

Watts on the Moon Challenge

NASA recently published a written plan detailing its Artemis program, including the latest Phase 1 plans to land astronauts on the Moon again within four years. That plan accompanies the agency’s concept for surface sustainability released earlier this year, which calls for an incremental buildup of infrastructure on the surface later this decade. Ultimately, NASA will use what it learns on and around the Moon to prepare for humanity’s next giant leap: sending the first astronauts to Mars as early as the 2030s.