Maclean didn’t escape in 1919, as we have seemed to this time in 2020 – while many soldiers had suffered influenza while serving overseas, they also were responsible for spreading the Spanish ‘flu as they came home over the six months after the Armistice – just as our COVID –19 arrived with people returning from overseas trips by air or sea.

It was in December 1918 that the first note from the Department of Health was tabled at a Maclean Council meeting. Here they were warned of the “danger of pneumonic influenza, and the detailed equipment needed for an inoculation depot”, Council was urged to try to secure the required equipment, but not to go to any expense until the disease arrived in the district.

By the end of January 1919, the councils of Maclean and Harwood met to form a committee to deal with the impending disease. February 10th 1919, the Daily Examiner reported that hypodermic needles were in hand and the secretary of the Committee recently elected to organise the response to the ‘flu, Mr Stuart Maurice, had received a supply of the vaccine from Mr Smith, manager of the Harwood Mill. An inoculation depot was to be set up in the Maclean council chambers. 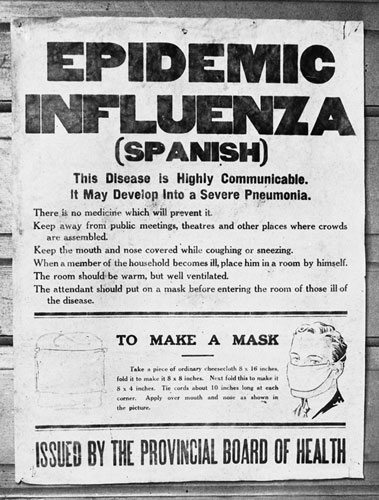 By February 1919 the news included the following ‘facts’:

The discussion about whether to hold a show was also in hand, with a final decision not to go ahead being taken as the year progressed. The show committee was also asked if a pavilion could be commandeered for an isolation ward if the need arose.

One of the first cases to be identified in Maclean was that of a traveller arriving from Sydney by boat. There was great discussion about whether this was a case of “true flu” because of inexperience in identifying pneumonic influenza.

The decision was finally taken to err on the side of caution; the patient was isolated, and doctors asked if someone with knowledge of the disease could come and educate them.

Three cases were identified in Harwood in May 1919, and Harwood School was closed. More cases were identified at Maclean and by the end of May there were six cases all from Harwood, at the isolation hospital at the Showground. The first Maclean local to be isolated was admitted to the Showground isolation ward on May 23rd. The houses of patients were isolated, and police rigidly enforced the quarantine. By May 26, it was announced that a Palmers Island resident had contracted the ‘flu. More patients followed, and the first death, that of a Mr T. Eaton was reported at Maclean. Still more positive cases followed in the next few months, so much so that after the isolation hospital was declared closed, it had to be opened again after only a week or two. By June 28, the newspaper showed that the isolation ward held five more cases-and the council was waiting for the State to reimburse them for expenses incurred at the two isolation wards, including the nurses’ salaries. By 11th February vaccine enough to inoculate 400 people had arrived in Maclean and the Lower Clarence Agricultural Society was asked if the showground could be used as an inoculation depot.

By July 1919, it seemed the virus had spread to more people and areas-three cases from Woodford Island, and Brushgrove had 24 cases with 14 being admitted to the temporary isolation hospital there, even Dr. Corlis of Maclean and Father Fagan were struck down, and the number of cases in Brushgrove rose to 36 by the end of July.

More cases filled the isolation wards in early August, but by August’s end both the Maclean Showground ward and Brushgrove’s temporary hospital were closed finally.

DID YOU KNOW? SPANISH INFLUENZA 1919