Nominations close for the Club Fours on Wednesday November 10.

Badges will be ordered for all club competition winners since 2019. All badges will be presented at the 2021 Presentation night to be held Saturday January 8 at 6:30pm.

This Friday night we will be having a $200 quick fire bowls night. Single entry 6pm start. Names in by 5pm. Cost $10 per person. Format will be decided on depending on nominations. Winners v winners & losers v losers.

Presentation night has been set for Saturday January 8 at 6:30pm. Cost is $25 and open to all bowlers and their partners. Place your name on the sheet on the noticeboard.

Nominations are open for our Mareeba Mufti Open Triples. Played on Sunday November 14 at 9:30am. Cost is $20 including lunch, for 3 games x 16 ends 2 bowl triples.

This is normally a mixed event, but we have changed it to Open for any combination of players.

The one big change to the C.O.P is that each team Must have a non-registered bowler in their team.

Final’s week was on, as the top four played off for the $1500 prizemoney.

In semi-final No 1 we saw our ladder leaders Pony Club take on the Darts 1 team who snuck into 4th spot on the back of two good wins the week before. And with a last end, last bowl thriller it was Darts 1 victorious 9/8.

In semi-final No 2 the ever-consistent Ambos team took on the Cricket Umpires. And right from the outset the Ambos gained control going out to an 8/2 lead after six ends. But the umpires dug in with a 2 on the next end to stay alive then dropped a 2 on the 8th end. Needing 6 on the last to draw, the umpires grabbed 3 shots to have a final result of 10/7 to the Ambos.

3rd v 4th saw the Umpires continue their last end form into this match gaining a 3/0 lead over the Pony Club after 2 ends. But the Pony Club hit back running out with the next 5 ends to have a commanding 11/3 lead. Umpires managed to win the last 2 ends, but the damage was done, and Pony Club ran out winners 11/5.

Our final started out as all finals should with teams trading shots and after 5 ends, we had a 4/3 score-line in favour of the Ambos over Darts 1. Ambos put their foot down with consistent heads and draw bowls and picked up a 3 – 1 – 1 over the next 3 ends holding a commanding 9/3 lead into the last end. But the need to get a 6 by Darts 1 was too much and they picked up 1. Congratulations to this year’s champions The Ambos winning 9/4 and picking up $700 for their charity.

In the minor placings, Bobcats 1 were successful in winning their group after overcoming the ever-professional GWS team with Toby Greene stepping in for the night. Thanks to the GWS boys for jumping in for a game and I’m assured they will be back next year to go 1 better. In group 2 the Helicopters (who narrowly missed the top 4) showed they were too consistent and picked up bar vouchers. 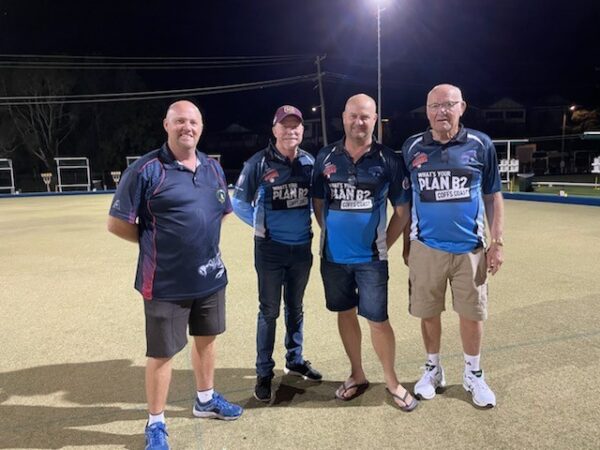 A big thank you to all for supporting this event. We look forward to seeing you all back again next season.