“For the past three years, drone-based shark surveillance has been trialled to manually monitor NSW beaches,” Mr Hardy said.

“While research by DPI has found that drone surveillance is one of the most effective shark detection techniques, it is currently labour intensive and relies heavily on pilot skill and sometimes additional observers, to detect and identify species of marine life.”

“Our team has been developing a new machine-learning algorithm that runs on mobile devices to identify shark species in real time from drones,” Dr Purcell said.

Surf Life Saving NSW and NSW DPI has been running trials of drones for shark detection since 2016 as part of the NSW Government’s Shark Management Strategy.

The new, AI trials have been implemented by DPI, Macquarie University and Surf Life Saving NSW, with pilots running the software every weekend since March and every day during the April school holidays.

Dr Butcher, from DPI, said data from the first weeks of the trial was used to increase the accuracy of the algorithm in changing conditions and that the AI model was then evaluated on new data in a blind test against expert observers.

“This is the first, independent, scientific trial of an AI algorithm for detecting shark species from drones,” he said.

Paul Hardy from Surf Life Saving NSW said the aim of the program is to increase the accuracy of shark identification to support beach management. He said that the AI software can run on sealed mobile devices without an internet connection, making it suitable for use in remote coastal locations.

“This approach will make current and future drone-based shark detection much more reliable and cost-effective, which will in turn make beaches safer for the Australian public,” Mr Hardy concluded.

Surf Life Saving NSW’s UAV program, which operates at 45 locations, is proving to be invaluable in marine creature management and search and rescue operations. This year 450 Surf Life Saving NSW UAV pilots flew more than 16,000 flights over the NSW coastline. 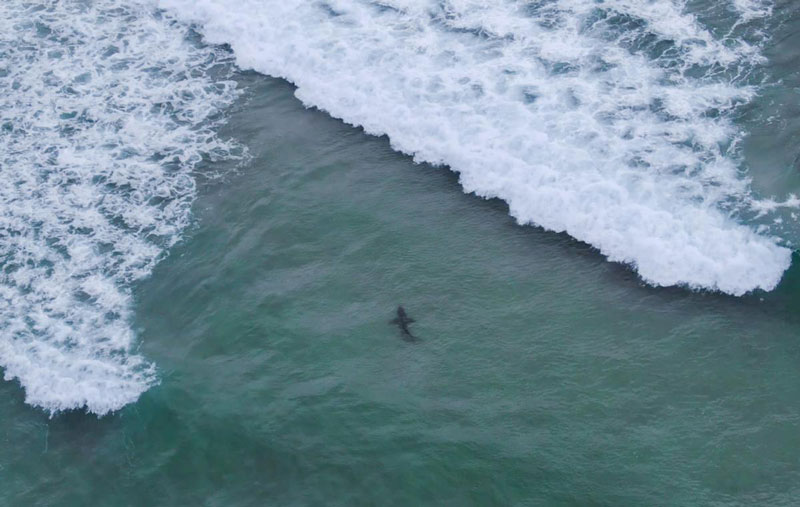