Kade Valja with some of the artworks displayed underneath the Grafton Bridge. Images: Lynne Mowbray
From the Newsroom Local News

For several years Grafton artist Kade Valja has lobbied to try and secure an area in Grafton that could be used for street art. 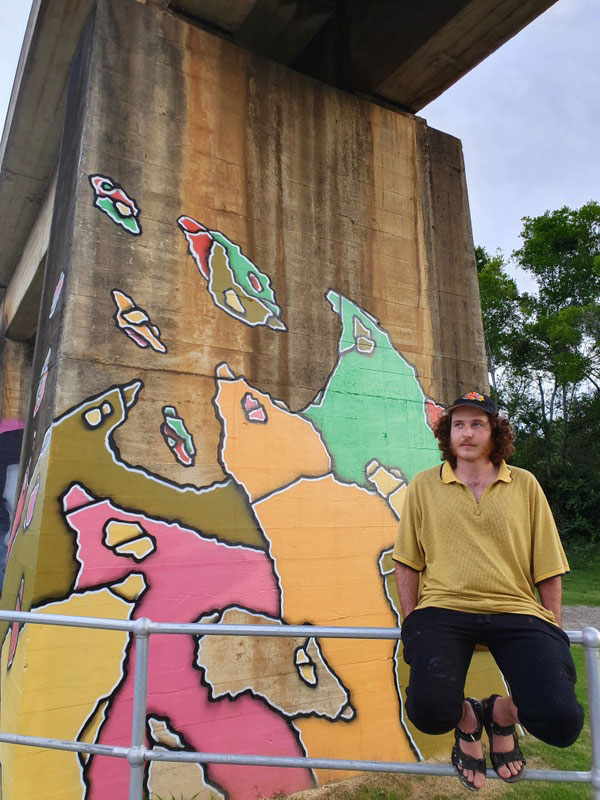 “When I was in high school, I started painting street art and urban art, which is typically done in the public domain,” Kade said.

“I started painting in Coffs Harbour and Lismore and those two areas have what is called a “legal wall”; a sanctioned area for people to paint street art and graffiti.

“It’s an area where the artist can safely practise their craft. This area gets painted over (by other artists) and is constantly renewed – which is all part of how this area works.

“These areas are in every city but were lacking in my own town.

“While still attending high school in 2012, I organised a meeting with the CVC Mayor at the time, Richie Williamson and local MP Chris Gulaptis at South Grafton High School, to explain ‘street art’ and how it works, how it sustains itself and what it’s for – but nothing much came of it.

“I followed it up at two further council meetings with a power point presentation and approval was eventually given to use the South Grafton levee wall,” he said.

Kade said that he was feeling despondent that there was still no designated place for street art in Grafton, so in 2015 he created a landscape painting underneath the Grafton Bridge.

“I chose a landscape because it would not be considered graffiti as it did not contain letters in it,” Kade said.

“I did that initial painting to prove the point that this (idea) could happen and work.

“So, within a few months I was talking with people from the council and they liked the painting and they had noticed that no one had painted over it with trash, like the rest of the bridge was covered.

“This was the start of more conversations with council and by 2017, we decided that the north side of the bridge was the spot and since then I have sort of curated the spot for other artists, as well as paint my own pieces.

“Several artists come to me and say that they want to paint a wall and I’ll allocate a wall; it could be a wall that hasn’t been painted on or one that has an artwork that has faded and ready to be renewed and can be painted over.

“I know who’s painted what and when something needs to be painted over.

“On the north side of the bridge there are about 100 different artworks – some have been painted over. Over south there are a couple and it’s slowly growing over there.

“I’ve seen this area (the northside of the bridge) remarkably change over the last 10 years, in a positive way.

“Right now, this area is asking for more to be done.

“More utilisation of the space for the community and maybe for artists as well.

“One idea is potentially an artisan market for creatives of all kinds to showcase their work here, alongside the street art and maybe have live music, live painting, all sorts of creative practices happening at once.

“It would be an awesome area to continue building our culture here in the valley. I feel it could be a very iconic spot if we seriously intended it to be.

“As creatives, a lot of us are hermits and keep to ourselves. Like blacksmiths for example, working alone in their studio and creating amazing work that a lot of people around here don’t know about. This is the kind of thing that will bring us together and expand our culture here.

“It’s not the fact that we lack creativity; we need to foster it. 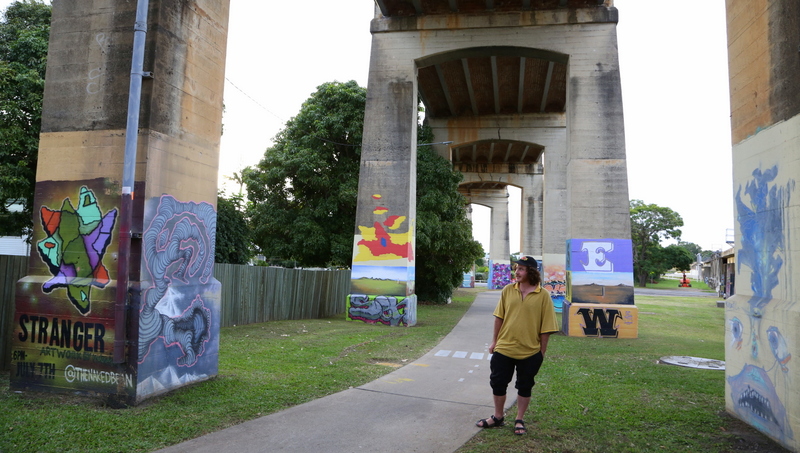 “Now that the highway is diverting away from Grafton, Grafton’s going to need festivals and need expansion. And cultural expansion is huge.

“I know that a lot of people internationally, love it when everybody within a community and council come together as a collective, to encourage the creative culture of local areas, because that’s what makes them unique.

“It would be fantastic to have an area to display the inter-pollinating of things such as street art and traditional art, which has been happening for a long time in the cities.

“Pushing our culture and expanding it and using places that are so asking for something like this to happen.

“We’ve got to get something happening now and the sooner the better.

“We’ve got the Jacaranda Festival, but to have an Artisan Festival – within the two Bridges precinct, would be something completely different.

“It would be great to get a small group together, to conceptualise this.

I’d be really interested to hear all sorts of people’s ideas about what else could be incorporated.

“We need to get the heart of Grafton pumping again,” he said.

Kade is hoping to meet once again with the CV Council post Covid-19, to discuss his concept. 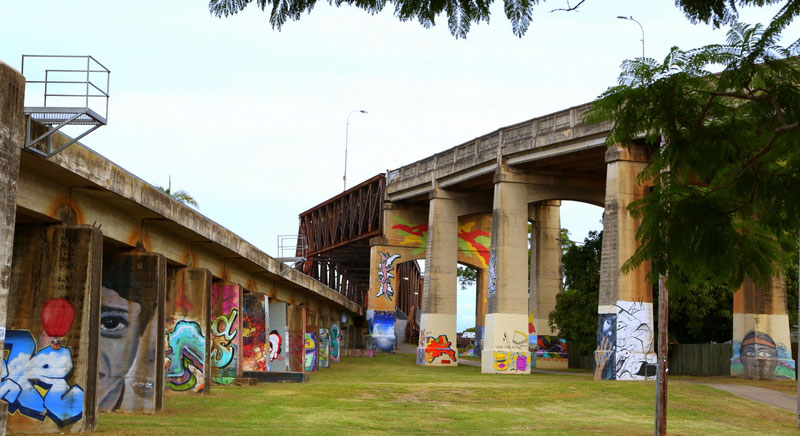