Hundreds of motorists were caught up in gridlock in Yamba on Thursday September 23. Traffic was backed up from Shores Drive into the Yamba CBD and surrounding streets. Images: Geoff Helisma
From the Newsroom

Clarence Valley Council’s general manager, Ashley Lindsay, has apologised to motorists caught up in hours of traffic gridlock in Yamba on Thursday September 23.

The chaos was caused by lack of coordination between to two separate roadworks: resurfacing of Yamba Road between the Shores Drive and Carrs Drive intersections, and roadworks near the intersection of Gumnut Drive, Melaleuca Drive and The Halyard.

Last year, CVC coordinated traffic movements during the construction of roundabouts on Yamba Road, which occurred during an elongated tourist season from July 2020 through to the end of the holidays in January 2021, by diverting traffic away from Yamba Road to the only alternative route – via Shores Drive, The Halyard, Gumnut Drive and Treelands Drive. 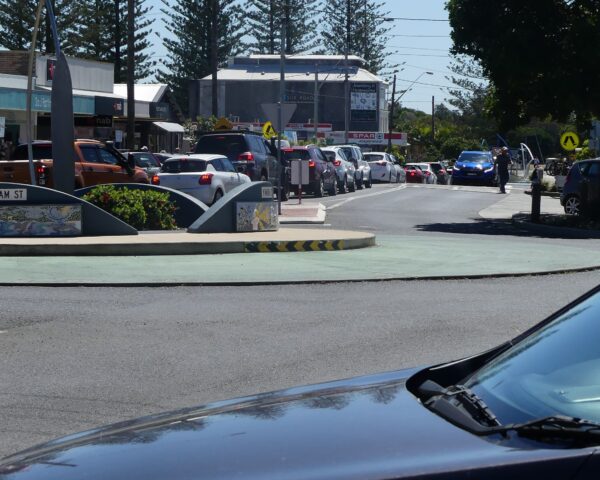 “In hindsight, works should have been scheduled not to clash with each other,” Mr Lindsay said.

Mr Lindsay said, “all I can do is apologise” to the people inconvenienced – one motorist told the Independent that it took 40 minutes to drive from traffic backed up along Angourie Road to Treelands Drive via Shores Drive, another said he spent 45 minutes in traffic from Angourie Road to the Yamba CBD and back, to collect his mail.

“The project managers should have known better,” Mr Lindsay said; “they’ll be counselled and won’t do it again, hopefully.”

Mr Lindsay said residents on the resealed section of Yamba Road were notified via mail and that the roadwork was advertised on CVC’s digital noticeboard subscription service, which replaced advertising in newspapers and cannot be viewed on CVC’s website.

Another motorist contacted the Independent and said he “tried three times and had given up” trying to get from Yamba Hill to the Mainbrace in Crystal Waters, to prepare his house for tenants.

“Why would they program roadworks in the middle of school holidays,” he wondered.

“But I guess I can call the day off; I can’t get out there now, so I’ll just sit back and have a beer.”