Last weekend the final two tournaments of the year were completed at the Yamba Bowling and Recreation Club when the Bob Ware Memorial Triples Tournament was held on Saturday followed by the Yamba Iluka Real Estate Mixed Pairs on Sunday.

More importantly, the Bob Ware Memorial Triples, as the centrepiece of the Yamba bowler’s annual charity fundraising initiatives, provided an opportunity to remember Bob Ware, the club’s green keeper for thirty years who unfortunately succumbed to leukaemia in 2010 and in Bob’s memory present a donation to the Australian Leukaemia Foundation. This year the bowlers were able to make a donation of $3,700 with the cheque being presented to Bob’s wife, Liz, on behalf of the club. 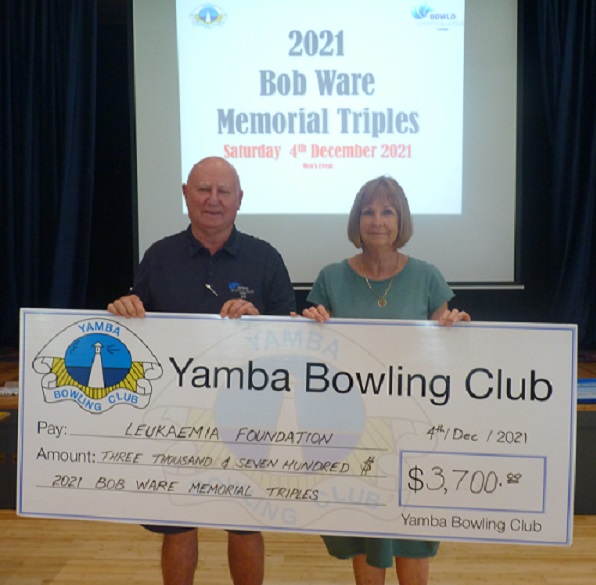 The Bob Ware Memorial Triples attracted a comprehensive field of bowlers from across northern New South Wales. The event was played over three rounds and at the lunch break, following the first two rounds, it appeared that the combination of Tom Cross, Tracey Jenner and Martyn Wood only had to win their final game to secure the winner’s cheque. However, the only weakness in their plan was that they had to overcome the reinvigorated trio of Brad Johnson, Brett Pingel and Ron ‘Pork Chop’ Smidt in the final Round.

Lunch appeared to agree most favourably with Ron and his team and the reordering of the side and a few resolute yet encouraging words from their inspirational new leader, Ron, was all that was needed for them to secure a compelling victory over the clubhouse leaders. In the meantime, the remaining unbeaten teams took full advantage to press for the ultimate glory. At the completion of play, five sides upheld their unbeaten record and placegetters were separated by the number of ends won and the total margins of success gained. Once the final calculations were made, it was the Yamba trio of Chris Gunning, Terry Johnson and Alan Abbott who stood upon the top of the dais.

Defending champions, Pauline and Ray Ryan from Maclean made a positive start to their defence and at the lunch break had secured two wins from two games. However, ten other sides had also completed the double and were in the hunt for the winner’s prizemoney.

The third round did eliminate some of the challengers, however eight sides maintained a perfect win result and again the order came down to ends won and margins.

The combinations of Lee and Bob Rae from Brooms Head and Paul and Ray Ryan, Maclean, did prevent a Yamba clean sweep of the top 13 places when they finished second and fourth respectively. But it was the current Yamba Club Mixed Pairs champions, Monica and Ian Parker, who claimed top position with an almost flawless display of pairs lawn bowls over the three rounds. 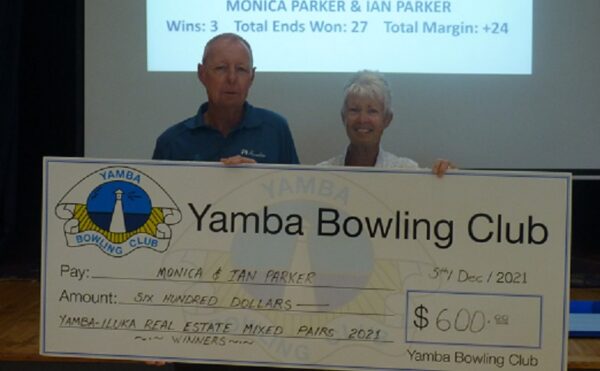