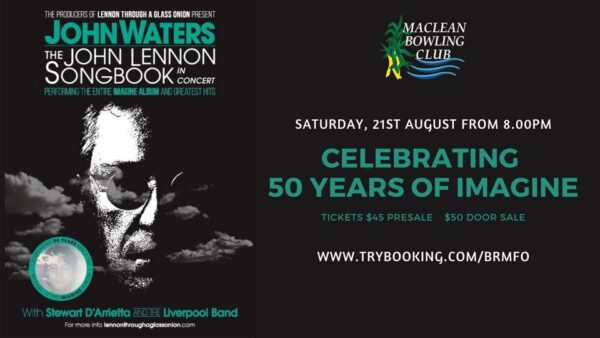 The producers of “LENNON THROUGH A GLASS ONION”
are pleased to present
JOHN WATERS and STEWART D’ARRIETTA with THE LIVERPOOL BAND
THE JOHN LENNON SONGBOOK
In Concert Celebrating The 50th Anniversary of The IMAGINE Album
Celebrating the 50th anniversary since the release of IMAGINE – the whole album will be performed live by John Waters and this band – a band that has toured the world performing the songs of John Lennon to great acclaim.
The great response to our recent performances of the new ‘Songbook’ concept has led to the idea of a tour, marking the anniversary of this iconic album with an entire rendition of it, track by track. Plus rocking on with some favorites from Lennon and the Beatles’ amazing catalog.
Waters and D’Arrietta are enjoying the on-stage freedom that comes from doing a concert of songs where they can perform ‘as themselves’.
John Waters says:
“The ‘Glass Onion’ show is a different and rather unique category of ‘theatrical’ style. It’s always exciting to do. But this ‘Songbook’ is a band gig and a more intimate style of bringing these great songs to people. We do it in our own way, and it gives us personal contact with our audience, which is such a happy vibe.
It feels like we’re all getting together again. For over a year the whole world has had to stop hanging out and socializing, and now that we have the chance, we need something like this. I know I do.
Exploring some of the lesser-known John Lennon tracks on his solo career albums is always a revelation, and I’m loving the process of learning more than you thought you could, with every new move. I’d like to continue doing that, so I can’t think of a more appropriate way than celebrating IMAGINE, and all the things that the famous one-word title conjures up for everyone.”
Book your tickets online at www.trybooking.com/brmfo