Many of the people who happened to be at the mouth of the Clarence River on the morning of Wednesday September 26 were probably surprised, if not baffled about what it was, when a 60 metre long and 7.7 metre high floating dry dock was towed out to sea.

Earlier that day, the now refurbished structure left its mooring at the Harwood Marine slipway, where it had been docked since early 2016, to begin its journey to Sydney Harbour.

Initially, Harwood Marine was not going to take the contract to restore the dock, but when the foundations of its slipway collapsed, refurbishing the dry dock was “an opportunity to keep our staff employed while the yard and slipway were being repaired”, says the slipway’s managing director, Ross Roberts.

“We were the only company they could find to refurbish it for a commercially viable price and have a place where that could be done, because it was going to take a long time,” Mr Roberts said.

The dock, which will be moored at the Noakes Group’s Berrys Bay facility in Sydney Harbour, is expected to “create 40 new direct jobs and five apprentice positions, as well as providing additional indirect jobs through subcontractor support”, a report on the dock’s restoration states.

“This is a fully Australian-owned company providing a local alternative, reducing downtime and fuel expenditure during docking periods.”

The $4million refit “has restored the dock to full working condition, lowered the centre of gravity and improved the stability, restored the original lift capacity and made it environmentally compliant”.

It can lift vessels weighing up to 1,000 tonnes.

The FDD was originally constructed by Morts Dock and Engineering Co in Sydney in 1942 and subsequently serviced naval vessels at Garden Island.

It was purchased by the Australian branch of French defence contractor, Thales, in 2006, as part of the sale of Australian Defence Industries’ fixed and floating assets.

It remained in service until it was decommissioned in 2011.

Noakes purchased the FDD in December 2014, where it spent a year at Berrys Bay before being towed to the Harwood slipway.

Mr Roberts said the FDD would be used “instead of having a slip or dry dock”.
“They fill it with water to sink it, drive the boat in, then pump the water out, and it lifts [the FDD] and boat out of water,” he said.
“It will be used to pull super yachts and navy vessels out of the water for repair work.
“Noakes were very pleased with the job [general manager] Gio [Cervella] and his team did.”
But there’s more to the FDD’s story: some local residents have formed a group called ‘Say No to Noakes – Save Berrys Bay’.
“We are a group of concerned residents who believe the Noakes Shipyard DA before Nth Sydney Council will destroy the beauty and peace of Berry’s Bay,” the group’s Facebook page states. 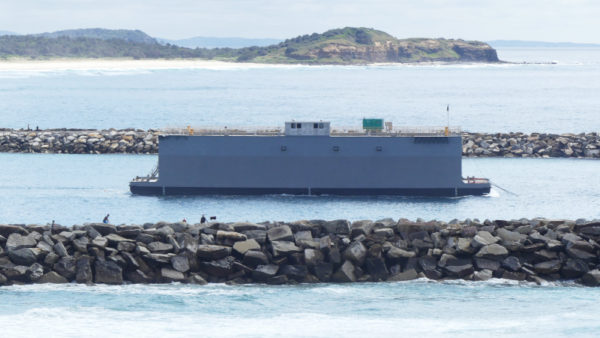