There are 26,463 rateable properties across the Clarence Valley, which are grouped into various categories for the purpose of levying rates. Image: CVC
From the Newsroom Local News

Meanwhile, a “very strong increase” in land valuations across the Valley over the three-year valuation period (July1, 2016 to July 1 2019) has seen the total land value of the Clarence Valley local government area (LGA) increase from $4.697billion to $5.792billion (23.31%).

Most of the property value increases took place in the first two years of the assessment; the Valuer General pointed out that there was, on average, only a “slight” 3.9 per cent increase in 2018/19.

While CVC is required to use the valuations when levying rates for 2020/21, the overall increase in land value across the valley does not impose a direct increase on the rates payable by individual ratepayers, because the total of the rates levied is capped by the ‘permissible rates income’ set by the IPART.

However, the report to council stated that “individual ratepayers who experience an above average land value increase may see a higher than the rate peg increase on their property”.

The council’s general manager, Ashley Lindsay, said that this would most likely occur when an increase in a property’s “value is higher than the rating category’s average”.

“Generally, in that case, what will happen, the rate increase for the ratepayer will be more than the eight per cent,” Mr Lindsay said.

Conversely, some properties will see a decrease in their rates, or an increase lower than the 8 per cent SRV, dependent on an individual property’s valuation when compared to the average valuation of those in the same rating category.

The value of most of the valley’s commercially zoned land remained steady during 2018/19, “with the exception of Yamba commercial centre, which experienced moderate increases”, the Valuer General wrote.

The cumulative increase to CVC’s general income from rates levies over the three years of SRVs is 25.97 per cent.

The council’s rating structure is included in CVC’s draft Revenue Policy, which forms part of the draft Operational Plan for 2020/21.

They are on exhibition as part of CVC’s Integrated Planning and Reporting Framework and budget documentation until 4.30 pm Wednesday June 3. 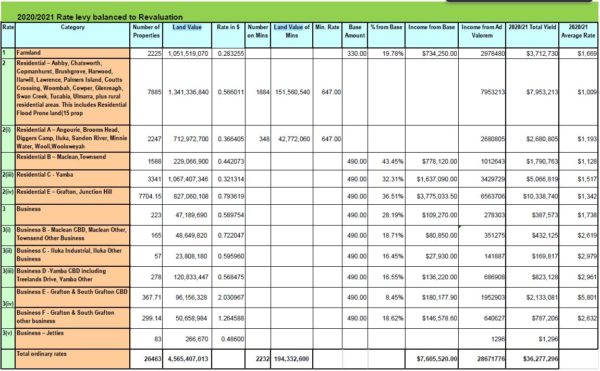 Valuations for many properties at Wooloweyah and Wooli increased by 40 per cent or more in the three-year period from July 1, 2016 to July 1 2019. Image: CVC