The Yamba 2021 Consistency Singles Championship was decided on Saturday with the semi-finals played in the morning and the final in the afternoon. Mother Nature again provided a range of additional challenges on the day with the ever-increasing wind the main cause for concern.

Rod Madden provided plenty of opposition for Don Plummer during their match. However, Don established a handy twenty shot buffer early in the contest and this proved to be the primary difference with Don taking the game by 154 – 126.

The other semi-final featured Graham Meany up against Bob Ballantyne. Many observers believed that Graham’s masterly control of weight and line would be the difference between these two lawn bowls warriors. However, it was ‘Bulldog’ Bob Ballantyne with his never say die attitude that allowed him to negate a twenty-shot discrepancy in the scores to eventually take the match by 150 – 140.

The final was played in what was probably the worst conditions of the day with the wind not only increasing in velocity but also varying its direction constantly and sometimes violently. After five very even initial ends of the contest, it was a penalty on the sixth that provided an early pivotal moment in the game. Don displayed his experience and calmness under pressure to capitalise upon the opportunity to gain steady scoreboard momentum. Ultimately, it was Don who claimed the title by 151 – 104.

Don now holds both the 2021 Major Singles and Consistency Singles Titles in what has been a very successful year. 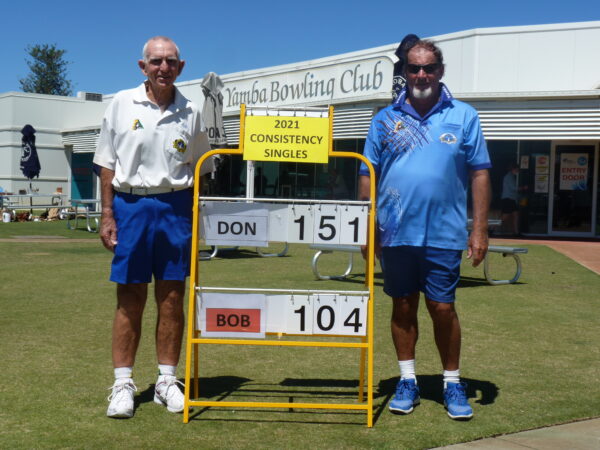 The first two rounds of the 2021 Mixed Fours Championship were played on Sunday featuring a fabulous display of fours play and fluctuating fortunes.

Round one highlighted the unpredictability of our game and the developing talents of a few of the club’s less experienced bowlers. Allan Marr, Judy Pryor, Joan Scadden and Graham Meany proved too consistent for Margaret Abbott, Judy Button, Jake McHutchison and Peter Retallack taking their match by 30 – 10.

The quarter-finals also provided quality lawn bowls and much entertainment for the appreciative crowd of spectators many of whom came to witness Kath Gunning play in her first club championship event. However, Kath’s appearance and obvious skills were not enough for her and team of Roz Moore, Chris Gunning and Brad Wynne to conquer the collective competences of Peter Forrester and his team going down by 11 – 32.

Ian Parker and his team proved too steady on the day against Martyn Wood’s warriors taking their game by 20 – 9.

Gloria Davis, Robyn McPherson, Brett Pingel and Ron Smidt stormed home against Gabby Freeman, Vicki Beddow, Don Freeman and Bill Andrews after the scores were locked together at 17 shots each to take the game 25 – 17.

Steve Butler again rallied his side to what appeared to be an unlikely win against the might of Graham Meany and his team by 19 – 13.

The semi-finals and final will be played on Sunday November 21 at 9am and 1pm respectively.