The Annual Presentation and Awards Dinner was held on Thursday December 9 with all of the year’s women’s, men’s, mixed and open championships and awards presented. The dinner allowed our members to acknowledge each other achievements and to celebrate the club’s success against the challenges that the year has provided.

Throughout the year the bowlers competed for the Yamba BP Bowler of the Month Award and then ultimately for the Kane’s Sports Bowler of the Year achievement.

This year competition for bragging rights as the top male and female bowler at the club was a particularly close and keenly contested affair. Julie Coulter, for the third consecutive year, was runner-up for the female award which was taken out by Carol Ritale who had an exceedingly successful year at club, district and regional levels. Carol, along with Lois Duncan, will contest the State finals next year in the Senior Pairs.

The men’s competition was also a very close struggle to assert club supremacy. The result was unknown until the completion of the final championship event of the year last weekend. Ian Parker, after a year that included several club championships, Zone One South singles qualification and Zone One representative honours claimed the runners-up place. However, Don Plummer took top position following a swag of club championships, including the Major Singles title, and, like Ian, Zone One representative selection. 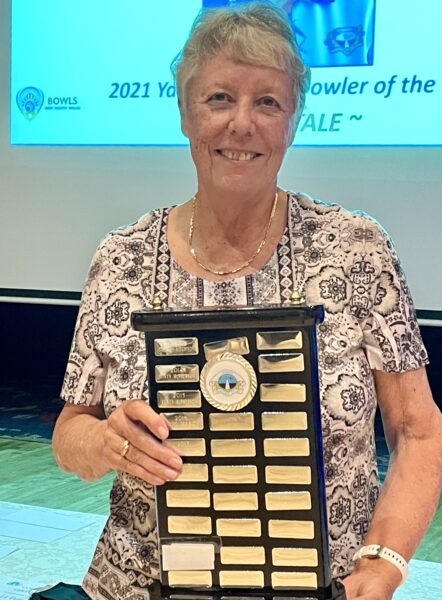 The final award of the night was the presentation of the President’s Award. This award is given to acknowledge the outstanding contribution to the Club’s Lawn Bowls Program throughout the year. The 2021 recipient of the President’s Award was Nev ‘Hammer’ Hillyard who was worked as a member of the club’s Match and Greens Committee, umpire, volunteer and behind the scenes to ensure the continued success of the club’s bowls program and is a more than worthy receiver of the prestigious acknowledgement. 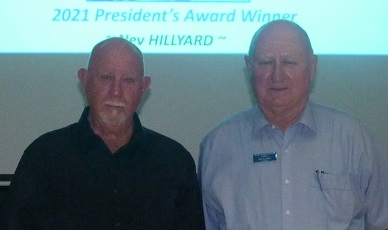 Social bowls continues with mixed bowls on Tuesday morning, men’s social bowls on Wednesday and Friday afternoons. Members are reminded that nominations can be made by telephoning the Bowls Office on 6646 8669 or by recording participation details on the nomination sheet adjacent the Bowls Office (the club is open at 10.00am) prior to 11.30am on the intended day of play. Results for this week’s men’s social bowls are: