The Australian War Memorial is looking for help to identify an Indigenous soldier whose photograph was found in South Australia. 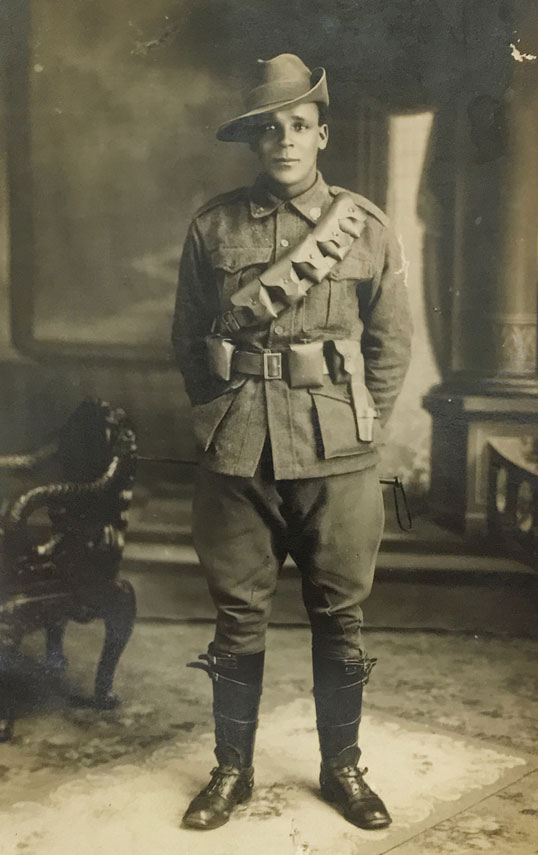 Indigenous Liaison Officer Michael Bell said the photograph of the Indigenous soldier was found in a trunk at the home of Dorothy Prisk (née Belton), at 26 The Minories, Port Adelaide.

The trunk contained memorabilia from several members of Dorothy’s immediate family, including her brother, Henry James Belton (known as “Harry”), who served during the First World War in the 10th, 50th and 45th Battalions, and for a time as batman to Major Noel Loutit.

The trunk contained a letter referring to a soldier named Will, who was described as being engaged in the Dardenelles and a large battle on the 7th of August, most likely the Battle of the Nek.

The trunk also contained a photograph of a soldier who appears to be Indigenous, and is likely to have been a driver or mechanic in an Australian Light Horse unit.

“We can’t tell who he is from the photograph,” Bell said. “But someone out there might know.”

A proud Ngunnawal/Gomeroi man, Bell is attempting to discover the identities and stories of what are believed to be several thousand Indigenous men and women who served in the Australian armed forces.

“When the First World War broke out, Aboriginal and Torres Strait Islander peoples had few rights, poor living conditions, and were not allowed to enlist in the war effort,” he said.

“Despite this, many Aboriginal and Torres Strait Islander people wanted to serve in defence of Australia, and were willing to change their names, birth locations, heritage and nationality in an effort to do so.

“They served on equal terms and were paid the same rate as non-Indigenous soldiers, but when they returned home, they found that discrimination had worsened.

“Because no-one saw them, perception of their service was skewed, and for a long time it appeared as if they had never existed.

“We’re trying to encourage people to come forward and tell their stories to help us tell the broader story of the Aboriginal and Torres Strait Islander experience.

“It is a story that is little known, and deserves to be widely known.”
​

Do you know who the soldier is? Contact Michael Bell via [email protected]​