Westpac Life Saver Rescue Helicopter air crew officer, Mark Sewell, owes his career in rescue to a passing comment from his wife, who already had an association with the Service.

Mark is celebrating 30 years with the Service, a career that started when wife Maryanne, who worked in the Emergency Department at Lismore Base Hospital and often saw the helicopter bring patients in, suggested Mark consider joining.

The rest, as they say, is history, with Mark joining in 1990 as a volunteer rescue crewman.

‘At the time I started, I was a diving instructor in Byron Bay, which I thought was the best job in the world’, Mark said.

Mark’s attitude soon changed though as he realised he was now part of a team who was changing lives every day on the North Coast.

His first training flight was at Lennox Head where he was only on the Helicopter for five (5) minutes before he had to do a dive jump into what was very familiar territory as a former diving instructor.

‘It’s one thing to roll off the side of a boat but it’s totally different to drop from an aircraft,’ Mark said. ‘The helicopter would then come back with a qualified Rescue Crewman and pick me up, this was using a static rope as they didn’t have a winch back in those days, the pilot had to use a mirror to guide the rope to us for hook-up, then static lift us back to the beach.’

As far as career highlights from the past 30 years, Mark said any of the winch jobs he has done over the years are a stand out, whether it be water, boat, bush or mountain rescues they are always challenging and interesting missions.

Mark noted one memorable mission was in the Bald Rock National Park near Tenterfield where the aircraft had been tasked to rescue an injured bushwalker. They had landed on top of Bald Rock and once they were ready to get the patient back to hospital, cloud set in and due to having no visibility they had to wait till the next day to get the helicopter out.

Mark stayed overnight with the aircraft for security, while the pilot went back with the patient and paramedics via road ambulance. The crew chief, Roger Fry, heard where Mark was and took his family to the area, picked up a pizza on the way and walked an hour in the dark to drop it off to Mark at the helicopter.

‘In 30 years, it has been interesting to watch how much the service has changed. Back when we had the Jet Ranger in the first few years of my career, we would have to use maps, charts, pencils and rulers to plan the mission. There was no internet, mobile phones or GPS back in the day and the navigation system we used to get back to Base was pre WW2 technology,’ Mark said.

‘Now with a click of a button, you can have the journey mapped for you and Night Vision Goggles (NVG) have made night missions so much easier. Before NVG we would use a search light and now I look back on those early years and cannot imagine going back to that after using the NVG’s,’ Mark said. 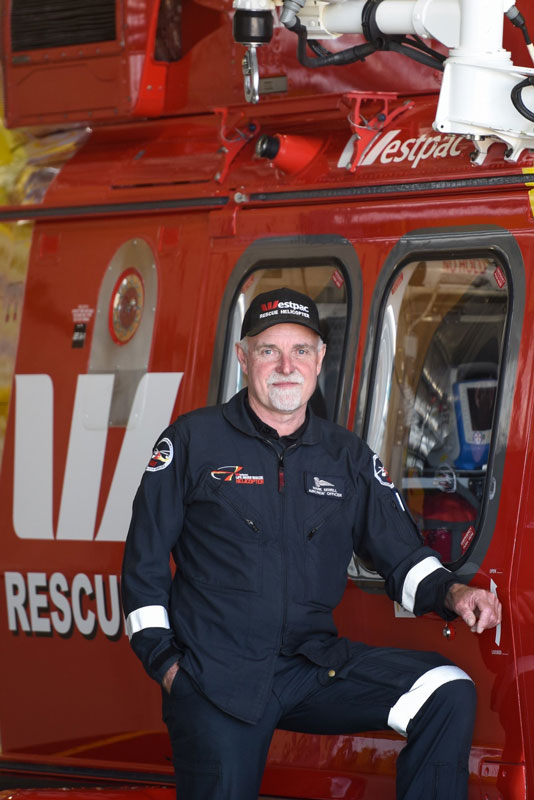 During his career, Mark has flown in four (4) types of aircraft used by the Service, including the Jet Ranger, Long Ranger, Dauphin and the current state of the art aeromedical aircraft of choice, the AW139.

A father of three, all born in his 30 years with the Service, it was no surprise that son Shaun worked alongside his dad for a period as a rescue crewman.

‘It has been an absolute pleasure working alongside such an amazing bunch of people. Including the crew, countless pilots, engineers and the fundraising and marketing team, as well as many NSW Ambulance Paramedics and NSW Health Doctors who make up our Critical Care Medical Team on board the aircraft, all collectively contributing to providing this vital service for the community,’ Mark said.

‘In the early days, we were all heavily involved in the fundraising before the organisation expanded to include a marketing and fundraising team and in addition to flying, we would all lend a hand to complete improvements on and around the Base and other tasks.’

‘I thought a diving instructor was a pretty great life at the time but now, after spending more than half of my life with the Service, I couldn’t imagine doing anything else that provides the rewards and satisfaction that I get from helping those in need in the community,’ Mark concluded.

Westpac Rescue Helicopter Service operations manager Robert Jenkins and CEO Richard Jones are understandably both proud of the achievements of the Lismore based team member.

‘The professionalism of our aeromedical operations is achieved through the quality of our team and the depth of experience they bring to their roles, with Mark testament to the competencies that are present within the Service,’ Jenkins said.

‘A career spanning 30 years speaks volumes of Mark’s commitment, his knowledge and most importantly his level of care and dedication to serving the community. He is a great asset to not only the Service as a whole but particularly to our operations in Lismore and on the North Coast,’ Jones concluded.